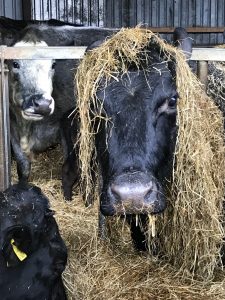 The cows are counting down the days until they can go outside.  Having been shut indoors since November, and being crowded out by hyperactive youngsters for the last two months they are ready for a return to the wide open spaces and some lovely green grass.  Silage is very nice, it can even be used as a fashion accessory, but there is nothing to beat fresh grass.

The UK possesses some of the best grass growing conditions in the world, our maritime climate, with ample rainfall, is perfect for it.  Even on land which cannot grow arable crops, it can be a valuable source of nutrition for humans when converted into meat or dairy products.

If we were all to turn vegetarian, it is interesting to consider what would be the best thing to do with all the grassland.  George Monbiot would say let it grow trees, and I think he would be right.  From the perspective of best value for the environment, and the future of our planet, we need more trees, and they do more good in terms of stabilising the soil and processing of greenhouse gases, than anything else.  It would not be much good returning the UKs grassland to forest though, if we continue to eat meat, which is reared on soya and other feeds which have been grown on land recently relieved of its rainforest in more vulnerable regions of the world.

Hopefully by the time you read this, the cows will indeed have been happily reacquainted with some real Dorset pasture, the rain will wash out their winter coats, and they will begin to shine once again in the sun.

All of our spring crops are now sown, the barley sown in February is up and away, and the rest which was sown in the last 10 days of March is just poking through. The poppies should be along shortly, though I am happy for them to stay out of sight in the soil whilst there is still risk of frost.  A badly timed frost just as the tiny cotyledons open can wreak huge damage, and risk needing resowing. 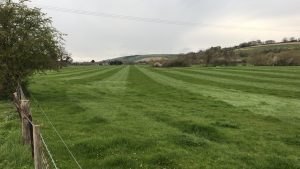 Since we finished sowing we have been catching up on some grassland work, which has to come second after arable operations, here Gary has rolled some lovely straight lines in the meadows, to impress passers by on Durweston Bridge.  It also pushes stones out of the reach of the mower, and flattens mole hills.  A driver of experience is able to do this freehand of course, but the job is made a lot easier with John Deere Greenstar (satnav) in the cab, which can steer the tractor while the driver admires the view/checks his phone/polishes the dashboard/does valuable admin.

As the new issue of the Focus hits your doormats, our sheep will be about the be shorn, so we’ll be hoping for warmer weather. Then they will be sorted into small groups in the fields behind Durweston to prepare for lambing.  Regular walkers will appreciate the importance of keeping dogs under control on the footpaths, for which we are very grateful.

The road works at Durweston bridge have begun, firstly the topsoil has been stripped back, and stone laid down, so heavy machinery can get at the culverts without sinking into the ground.  The plan is to replace the culverts under the road with new ones and to widen the causeway to allow a 2m verge on each side of the road.  Lately the road has been showing signs of subsidence at the edges, so something had to be done, and it could not be widened without installing new culverts.  The original arches are probably very old, though maybe not as old as the bridge itself. The history of the route of the road here is that way back before it was built, all traffic from Blandford used to come through the Bryanston Estate and into Durweston. One of the Lords Portman got a bit fed up with this, and decided to build the bridge, and connecting roads, to divert the traffic around his estate.

It is a shame he didn’t build the bridge a bit wider, because I think we are stuck with it for ever. In spite of the squillions it will cost to rebuild the causeway this year, the road will narrow on the approach to the bridge and we will spend many more years sitting at the traffic lights watching lorry drivers smash into the old bridge walls as they try to negotiate the bend. I have often thought how daft this is. For a couple more million we could widen the bridge, or build a second one, and do the job properly, remove the lights and improve traffic flow no end, and everyone’s quality of life. Oh and a pavement alongside the road is essential, for walkers and bus users, but currently not planned. I recommend writing to the new Dorset Council very soon to try to get this changed.

Here is a picture from mid April, after the main article went to press, showing the current state of the works 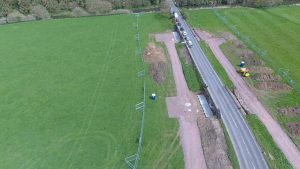 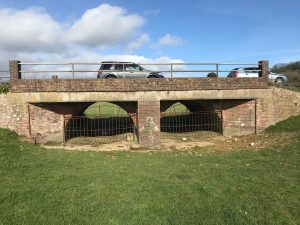 One thing the roadworks are sure to guarantee is a wet summer.  The river has not flooded properly yet this year, so watch out. Here is a reminder of what happened in July 2012. 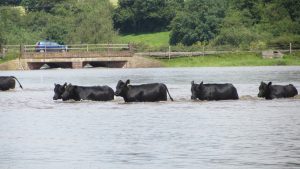 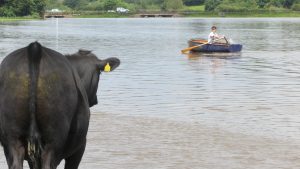 I can barely bring myself to mention our oilseed rape crop this year, it is not much short of a disaster.  I reported in the autumn of the problems we had with cabbage stem flea beetle at establishment. The beetle flies in and eats the emerging plants, and if in sufficient numbers can destroy the crop completely. However if the crop survives, and limps through to spring in the hope that a dose of fertiliser and sunshine will bring it back to life, we find there is a nasty sting in the tail. While the CSFB was eating, it was also laying eggs, which hatch out over winter and the resulting larvae burrow into the plant, and munch their way to the growing point, rendering the plant a wreck.  We now have 120 hectares of scruffy moth-eaten rape staggering into a half hearted and extended flowering period, some plants escape, while others slowly succumb to the internal onslaught. This whole sorry turn out used to be prevented by the use of a seed dressing at the start, which discouraged the feeding and egg laying, allowing the rape to reach its potential. The seed dressing was the controversial neo-nicotinoid type, which is suspected of harming bees, so perhaps rightly, it has been banned in Europe, though nowhere else in the world.  I am told that certain European countries allow farmers to continue to use it under a derogation, which isn’t playing fair. The sprays that used to work no longer do as the beetle has developed resistance.

The upshot of all this is that rape growing will greatly reduce in the UK until a new treatment can be found, thus removing a very valuable break-crop from our rotations, with very little with the potential of being profitable to take its place. We won’t be giving up quite yet, we will reduce the acreage, try different sowing times and change the agronomy a bit, but my gut feeling is that will be pot luck. Some years will be bad CSFB years and others not so bad. 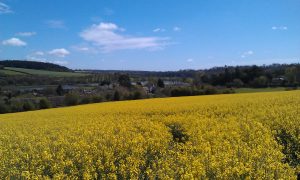 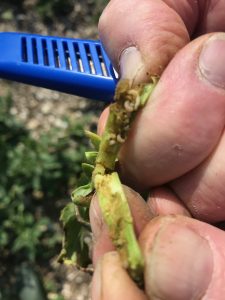 The flea beetle larvae at work in a rape plant 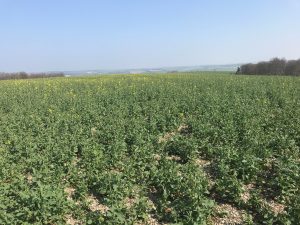 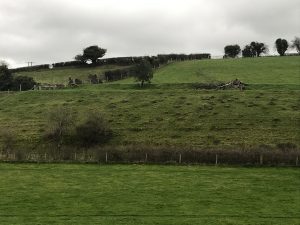 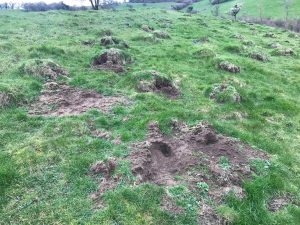 Look closer and find that the ant hills are under attack

So what explains this?  For very many years this small area of steep bank was fenced off, to stop the sheep getting caught in the brambles along the hedge at the bottom.  A couple of years ago we removed the fence because the cattle don’t get caught in brambles, and the grass needed grazing. Most of the downland banks along the valley used to support ant hills in my childhood, but they have gradually disappeared, without it really being noticed.  The fence had clearly kept the marauding ant-hill destroyer away, allowing the ants to flourish, but now he is laying waste to the bumpy landscape, and quite soon all the ant hills will have gone.  We are considering putting back the fence, in the name of ant hill preservation.  No prizes for who the guilty culprit is….. The same menace who eats birds eggs and chicks belonging to ground nesting birds such as lapwings, stone curlew and English partridge, which perhaps is why we find none of these birds on our farm. 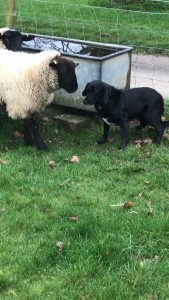 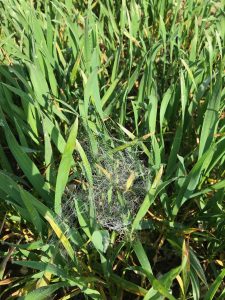 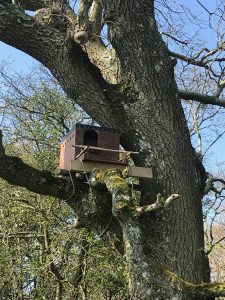