On Monday 17th September Nick Bragg and his silaging team turned up with tractors, trailers, a huge forage harvester, a new JCB loading shovel, and a mobile weighbridge.  It was time to cut the maize, and see how much was really there after the very dry summer.

As you can see from the picture, cutting the first swath around the outside of the field is quite tricky, the tractor has to drive unhealthily close to the forager, and the forager driver has to spend more time guiding the spout and plume of maize into the trailer than he does on looking where he is driving.  And this quite often is the outcome: 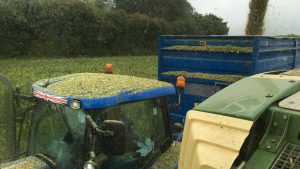 The machine takes the whole crop and chops it down to less than 8mm lengths, so this 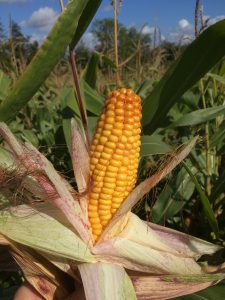 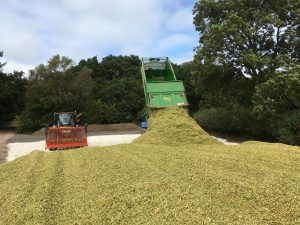 It is very important to compress the silage as thoroughly as possible, to exclude oxygen, so that anaerobic fermentation will occur, acids are then produced which preserve the plant material in a form which is very appetising either to cows, or to the organisms which live in an anaerobic digester in our case.  They produce methane gas, which is captured and fed into the nearest gas main. 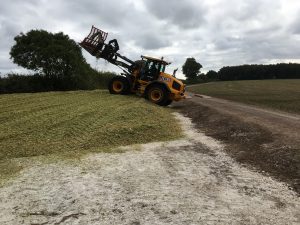 The most important job is done by the driver of the loading shovel, he has to clear the tipped load out of the way before the next one arrives, build the clamp in a safe and sheetable shape, and compact it by driving back and forth across the whole heap all the time he is not moving tipped loads, so he is on the go the whole time.

The yield was not what we might have hoped for in a more normal year, and the team cleared 22 hectares in one day, producing some 700 tons.  They came back the following day to sheet down the clamp in howling wind, and then move all their kit on to the next farm.

During the winter, lorries will bring in spent digestate for us to spread on the land in the spring, and on the return journey they will take silage back to the digester.

While the maize was being harvested, and since, we have been waging a running battle with the dreaded cabbage stem flea beetle, which has been wreaking havoc in our oilseed rape fields. This has without doubt been the worst season for this pest we have ever seen here in Dorset.  The problem is that there is no reliable cultural or chemical control for this pest, and I can see a day not too far ahead when farmers will give up the struggle, and will return to boring continuous cereal cropping, which is not only less good for the soil, but will lead to a reduction in yields.  There are no other break crops which produce as reliable a return on a large scale as rape does, so it would be remarkably helpful if someone could rush onto the market a new insecticide which does not harm bees and which can be applied as a seed dressing to the rapeseed.  Sadly no sign of this for the forseeable future.

Too much rape looks like this, see the little blighter munching: 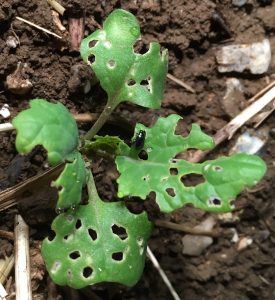 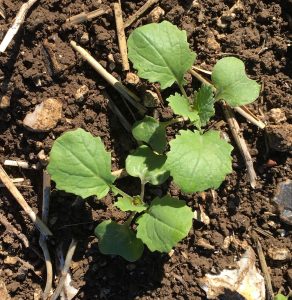 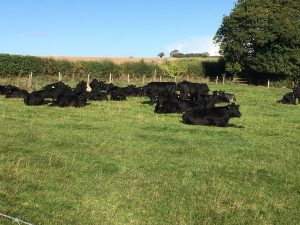 A couple of weeks ago it was time to send our youngstock to market.  The grass is running out and we need to save what little there is to feed the cows.  Luckily they all passed their pre-movement TB test. Here are the three lorries which took them up to Frome, where sadly prices were about 15% lower than at the same time last year.  This is largely a consequence of the dry summer, many farmers are short of fodder, and that which is available is very expensive. 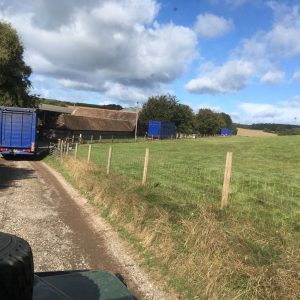 On the subject of TB, a number of farmers I know are still suffering heavily from this pernicious disease. One has had to send 30 cattle for slaughter this week as they tested positive, the most depressing aspect of this is that most of the animals are less than a year old, indicating that they have contracted the disease whilst outdoors this summer. I understand that 12 of them already had TB lesions in their bodies so the disease has got a good hold on them frighteningly quickly.  The dry weather has resulted in grass being very short as the cattle search for food and eat it down tight, this also means it is more likely that they come into contact with ground that has been fouled by diseased badgers.

Another farmer in the district is trying to sell his herd so he can retire, but he keeps getting the odd TB reactor, which means waiting another 60 days for the next test.  A herd has to go clear for two consecutive tests before restrictions can be lifted and animals sold.  He is on a treadmill that he must wonder if he is ever going to be able to get off.

The badger cull pilot areas have recently been shown to be reducing new TB infection levels by up to 50%, so perhaps there is some light at the end of the tunnel. 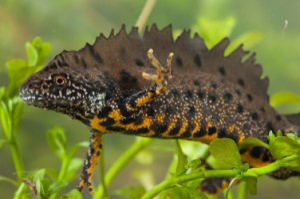 We have just received the results of an interesting survey which has been carried out this year, of 3 ponds surveyed, 2 are found to have a population of great crested newts, quite a rarity.  We know that one of the ponds had a viable population 20 or 30 years ago, but confirming their presence is quite tricky.  These days the ponds are awarded a Habitat Suitability Index (HIS), and in addition to this an environmental DNA test is carried out to test for newt DNA in the water.  After this in-depth analysis, 2 of our 3 ponds are deemed to contain great crested newts, which are a European protected species.  Does this mean that after Brexit they will be in danger?  I do hope not.  The male has a very distinctive crest along its back, easy to see when in the water, but it lies flat on the back when on land.  It also has a gorgeous orange tummy with black blotches on it, unique to each individual. 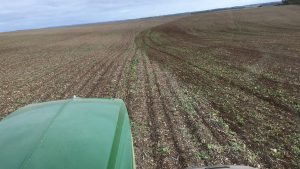 For the last two weeks we have been flat out sowing our autumn crops of wheat and barley, finishing yesterday (8th Oct).  The weather and soil conditions have been almost as good as they could be, a couple of bursts of useful amounts of rain, with lovely sunny days in between. The wheat sown 2 weeks ago is already showing up in the rows.  We have been able to roll all the fields to push the stones in to the ground, and to give good seed-soil contact which helps a speedy germination.  At times the seagulls have turned up in the hope that they might find some worms exposed by our machines. At every pass of the drill they rush across the freshly moved soil, but are mostly disappointed, as we only cultivate shallowly. Ploughing turns soil over from deeper down, which exposes many worms, one of the reasons we gave it up many years ago, as we don’t want our little wriggly friends taken away, they are an essential component of healthy soils. 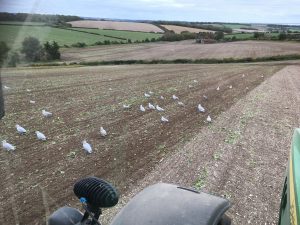 The seagulls move away as tractor approaches 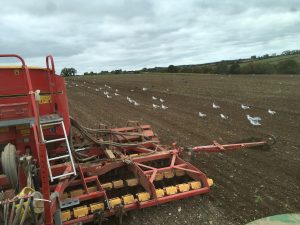 One of the hazards of moving kit on the road is a puncture.  It doesn’t improve relations with fellow road users when you have to drag the machine (rollers) very slowly to the next pull-in, hoping you don’t wreck the wheel.  It had to happen on the narrowest part of the main road didn’t it, on a blind bend?  The machine is quite wide and the wheel has to run partly on the verge where it is a bank, with assorted debris lying along it. 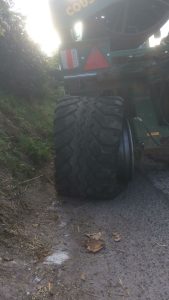 It has turned into springtime in the autumn this week as our August sown cover crop flowers like crazy in the October sunshine.  There are still plenty of bees about to appreciate the flowers.  They like the phacelia in particular.  Not a native of the UK, phacelia originates in the Americas, but seems to be very happy growing here, it fits in well in a good many environmental seed mixtures, being a good producer of nectar. 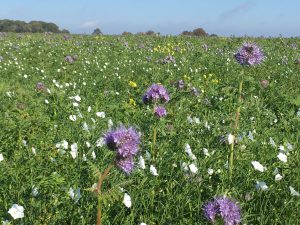 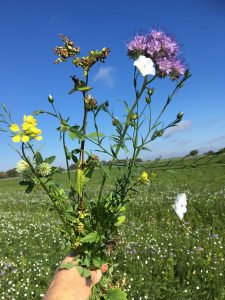 Phacelia, linseed, clover and charlock in flower, spot the odd one out, and buckwheat which has already set seed.  They are also pretty vigorous below ground level, their varied rooting habits should be contributing to soil microbe activity.  I hope will notice some improvement in soil properties after a few years of doing this kind of thing. 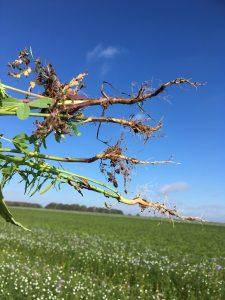