The poppies have flowered for quite a long period this year, giving a hint of the fact that they are a bit thin this year, if the population is low, the plants will throw up extra branches and flowers to fill in the gaps.  If the crop is thick it will remain largely mono-stemmed. This season has been hard for the spring crops in particular, as so little rain has fallen since they were sown in April, their growing season has been severely truncated, by wet weather at the beginning, and hot weather at the end.

We started the 2018 harvest campaign yesterday (10th July), in the winter barley on the Knoll, above Knighton House, to the right hand side of the picture above, the crop seems reasonable, though not up to the record yield of last year, it is very dry, at 12.5% moisture we are losing 2% of the yield simply due to dryness.  The straw is lovely and clean, very bright, almost white, as disease levels have been low in the dry season. 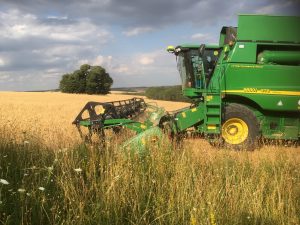 The combine completes the first round of the Knoll, it’s a long way round this 95 acre field.

The Knoll has some of the best views in Dorset, sweeping round from Badbury Rings in the East, and even the Isle of Wight on a clear day, to Hod Hill across the valley, Win Green away to the north, and our own poppy fields to the west. 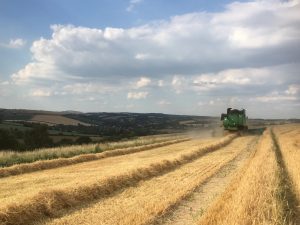 Similar views are on show in Great Ground, here is Hod Hill, rather closer: 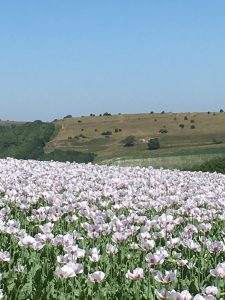 In the poppies this year there is the odd colourful rogue: 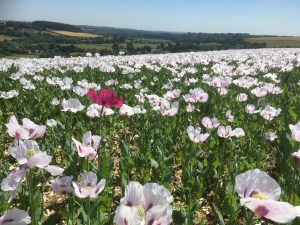 A week before harvest we hosted our regular straw sale, an auction of standing straw, run by our friends from Symonds and Sampson.  It was a hot day, but well attended, trade was brisk and good prices were achieved due to the fact that most farmers’ sheds are empty after the long wet winter, and the drought has left people short of fodder, add to this the concern that straw itself will be short due to the dry season and you have a perfect storm. 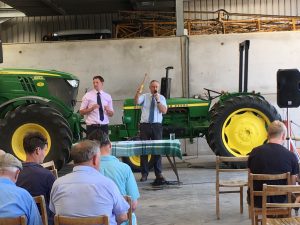 What am I bid?  Mark Northcott prepares to drop the hammer on another lot of straw

Stuff Brexit, we have to make sure we have enough winter fodder for our animals.  What on earth they will be worth after March 31st is anyone’s guess however. One thing I will say though is that if the UK’s farms and food industry were run like the current government, the supermarket shelves would be bare.

Wessex Internet brought in their team last week, as part of a project to bring fibre optic to businesses in Dorset and beyond, we are adding our farm office and grainstore to their network of breakneck internet speeds.  Part of the plan is to upgrade the grainstore CCTV system, so that the store can be monitored over the internet, from a distance, on a phone whilst driving the combine at lunchtime for example. 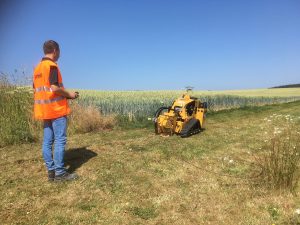 In this picture Wessex Internet are trying out a new mole plough, which left very little mark where it has been, with the fibre safely out of harm’s way in the ground. 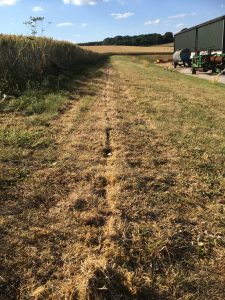 The cows and sheep are rapidly running out of food, and shortly we will need to break into winter rations to keep them happy, the grass stopped growing some time ago, and what remains is getting browner by the day.  We have made about half of the silage we will need for next winter, but still have some way to go, some of our grass margins around the arable fields will hopefully help to fill the gap, but will we get any more growth this year?  Many farmers start to talk about 1976 when it is as dry as this, there is some way to go before it gets as bad as that, lets hope it doesn’t. 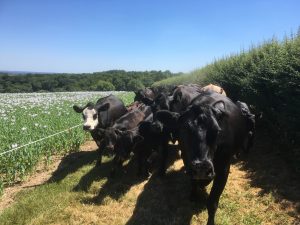 Moving the cows from one side of the farm to the other was a bit of a challenge, all they wanted to do was eat the grass verges and the hedges.  Once they get through a gate into an open field though, they just love to stampede, even the bull was seen cantering down the hill. 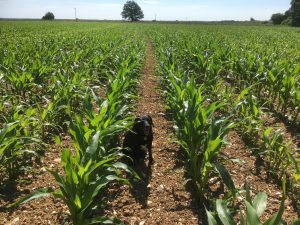 This picture of the dog in the maize was taken on June 23rd, it has grown so high and so fast the dog is now way out of sight. 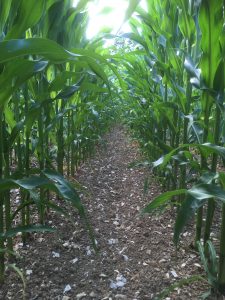 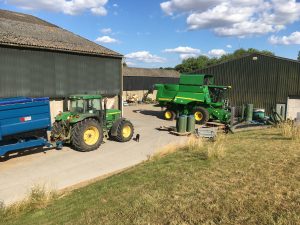 Combine, trailers and grainstore equipment queuing for a washdown. (And the dog)