The cows and calves are now comfortably bedded and chomping through the winter silage supply indoors.  One bunch had a 10 day detour to a field of phacelia and clover cover crop, to see if they liked it, and whether recycling it through the bovine digestive system was a good way to cut the excessive growth down to size.  They certainly seemed to like it, and have reduced it to a manageable size for the spring preparation of seedbeds for barley.  The mower man won’t be so pleased about the enormous footprints in the verge next to the farm when he gets the mower out in the spring, maybe we need to roll it. 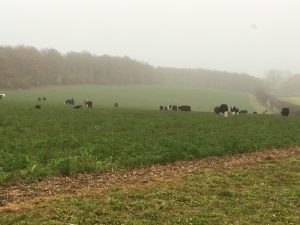 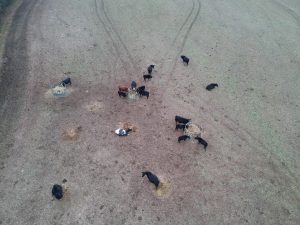 After 10 days or so, with the threat of heavy rain, we weaned the calves and moved them to Websley and the cows to Shepherds Corner. They had done a great job in the field, although as is usually the case they spent more time near the silage feeders we were buffer feeding them with, so the poo gets deposited in a fairly concentrated area.  To do the best for the soil, we need to train them to do this evenly all over the field, and not all in one place.

Over the last six weeks, the lambs have been introduced to the pleasures of turnips, it always takes them a few days to get used to the taste, and they will eat every last blade of grass that they can find around the hedges before they will submit to a turnip diet. Once that hurdle is overcome however, they grow like crazy, and will be happy for months.  Just don’t smell their breath. 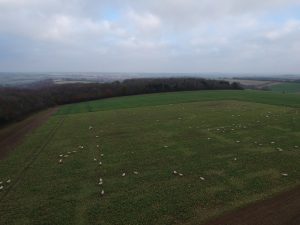 The ewes are grazing fodder rape in the field next door, no turnip for them, their old teeth aren’t quite up to it. 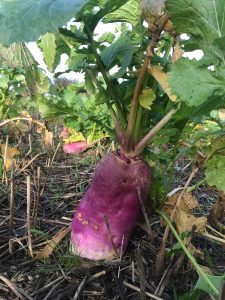 Regular readers will recall that we have experimented with a large area of cover crop this autumn, all of which has grown extremely well.  As we turn our minds to establishment of the next crop we wonder how on earth we are going to incorporate all this plant material into the soil.

The manufacturers of a new style of ‘no-till’ seed drill are falling over themselves to sell new kit to farmers like us, but it would be very easy to spend upwards of £100,000 on the wrong machine.  We hope to do some research in this area next year, with the aim of finding a machine that can do what we want, reducing the need for cultivations, and coping with large amounts of trash. In the meantime, we have decided for the approaching season that we will cope with our existing kit, and make the best of it. Today we are taking advantage of a dryish period, and mowing off three-quarters of the height of the plants. 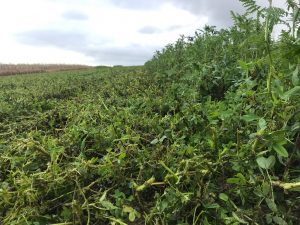 The theory is that the decomposing mowings will give the worms and other soil dwellers something to feed on, at the same time raising soil organic matter content, and breaking down the plant material into nutrients that can be used by the next crop.  Some of the phacelia is still flowering, but there won’t be many bees around now to enjoy them, and it is too cold for any nectar to flow. 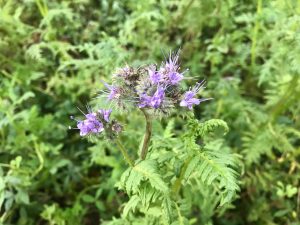 There has been a steady flow of lorries in and out of the farm over the last weeks.  Wheat has gone to various homes, and barley has gone to Southampton, to be loaded onto this boat bound for Ghent in Belgium, where it will be brewed into some delicious european lager.  How this kind of trade will take place after March 29th 2019 is anyone’s guess, will we have to pay enormous tariff charges in a WTO scenario, or will all have been smoothed over so our country can continue to function properly??? 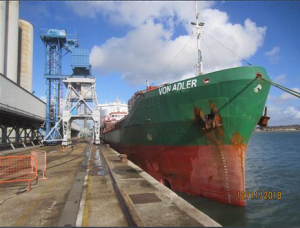 We have also begun to ship out the pile of maize silage that was made by Nick Bragg and his team back in September. Once unsheeted its delicious smell fills the air. There is a single lorry on turn around between the farm and the digester, bringing spent digestate for us to spread on the fields in spring, and taking away the maize on the return journey.  The digestate is a lovely dry fibrous material, not unlike potting compost, it looks like a great soil conditioner. 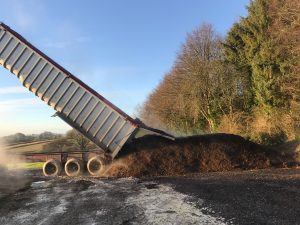 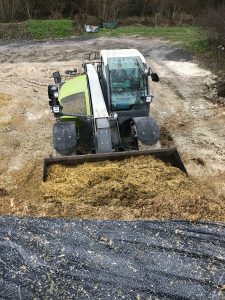 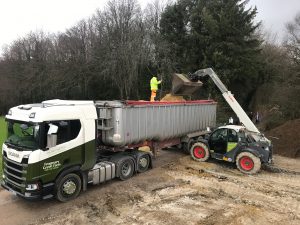 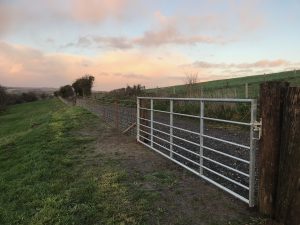 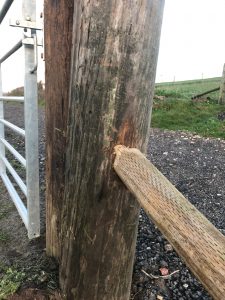 Now that we have had a respectable amount of rain (185mm in November), the ground has softened up sufficiently to allow Gary and Brendan to get on with erecting the long awaited new fence along the track between Knighton and Websley, the old one was very tired, and was demolished almost a year ago.  The summer has been too dry and the ground too hard to replace it until now.  They have put a smart new gate in the middle which will cut whole minutes off the daily stock inspection round.

A summer study of bee life on the farm produced some results this week:

Bees were only counted if they were foraging or nest searching on the 100m marked area on the margins during a timed slow walk.

These figures compared favourably with results from other farms across the project, but we are warned not to read too much into the numbers at present because the sample sizes are small. 15 farms in all.  The aim of the project is to discover what kind of field margins have the most beneficial effect on bee numbers. 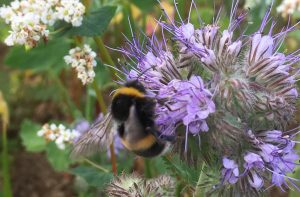 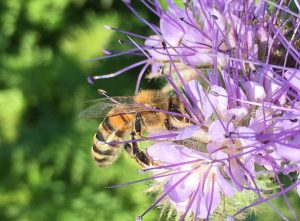 A honey bee with its proboscis planted in a phacelia flower

A farmers’ study tour to Hungary at the end of November was fascinating.  We visited a number of farms and businesses and learnt a lot about Budapest and the wider country through its interesting past.  From an agricultural point of view, the communist era has left its mark in a very substantial way.  Before collectivisation of the farmland, farms were small and privately owned.  After the communists took over following the end of the second world war, the land was all taken into collective farms, and production was centrally controlled, with the inefficiencies one might expect.  Once the wave of new democracy freed the country in 1989, the land was eventually returned to its former owners, however many had found other jobs, and many more had lost their farming skills.  And so developed the current system of large farming corporations, often covering thousands of hectares, on land which is still owned by many thousands of landowners who own very small areas. These new superfarms loosely follow the boundaries of the old collectives, and probably still have many of the same people running operations, some of whom have become wealthy managers.

One farm we visited was of 7000 hectares, and of the fields we saw, they were harvesting sugar beet in one (300 ha), and were growing wheat in another (600ha) one, the size of our whole arable operation.  With no hedges or trees across the entire field.

There appeared to be no attempt whatever on this particular farm to grow any areas for wildlife, no beetle banks, wild flowers, grass margins, trees or anything, it was an environmental desert.  It led me to think about the extra costs we incur in providing wildlife friendly stuff in the UK, and how are we to compete with they who provide none?  Perhaps their rich black soils are more suited to crop growing than ours, and that we shouldn’t worry that there are huge areas of environmentally dead areas across central Europe. Buy it from them and just grow pretty flowers and bumblebees at home. And yet….. we were told that their average wheat yields are around 5 tons per ha, the UK’s is 8.5tph. There is erratic and unreliable rainfall in Hungary which keeps their yields down. The UK benefits from a maritime climate, plenty of rain, giving us some of the most productive land in the world. Is it right to abandon food production in the UK in favour of being a lovely pretty environmental wilderness (with dogs), and source all our food from a dead place? This is what some people advocate. It is madness. That way hunger lies. 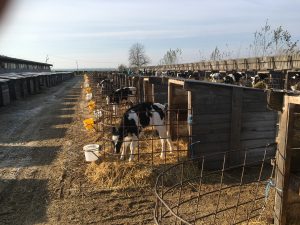 Calves in hutches on a large dairy farm in Hungary 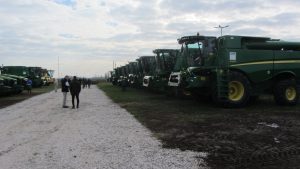 Combines waiting for a new owner in Hungarian dealer’s yard. 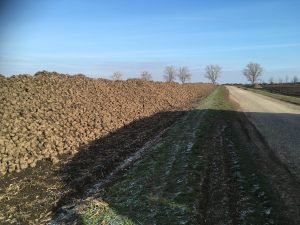 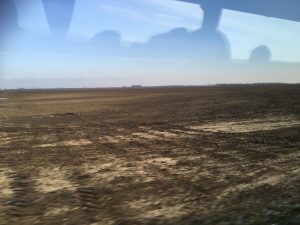 A 300ha sugarbeet field after harvesting 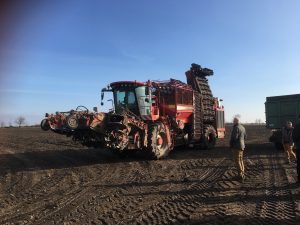 Sugarbeet harvester waiting for the ground to thaw 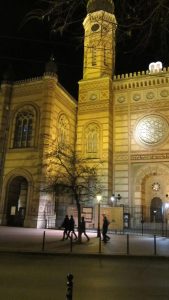 Some UK farmers walk past the largest synagogue in Europe, in Dohany street in Budapest