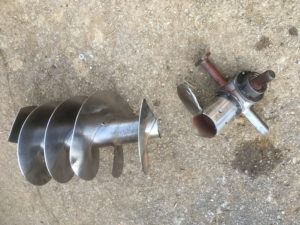 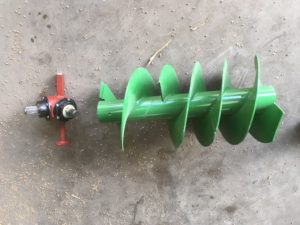 Harvest ground to a halt twice with breakdowns during the final week, at last conditions had come good, and we were going for it, unfortunately when we were down next to the village cutting wheat in Wynchard the unloading auger packed up, not very helpful when you’ve a full tank of grain, and you want to fill it up again many times over.  It was well after last chance ordering time for new parts, and it took half of the next day to take the machine to pieces to find out what was actually wrong.  Eventually we found that the splines of the gearbox shown in the above picture had worn, and in such a way that the auger could not be separated from the gearbox, which normally it should.  It was particularly tricky to diagnose, and in the end we cut the auger open so we could see what was happening from inside.  In the event, both parts had to be replaced.  £3000 and two days later, we had the correct parts, and were able to reassemble.  A day was lost by the wrong part being supplied from Nottingham at first attempt, this being blamed on John Deere’s computer system changing part numbers without telling anyone!  One advantage of the delay was that the wheat was so much drier by the time the combine was fixed that it didn’t need drying. 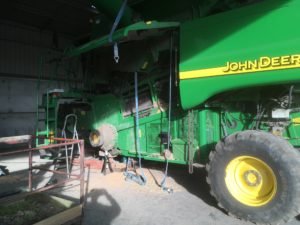 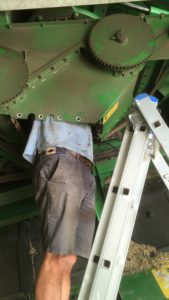 In the end we finished cutting the wheat and the poppies on bank holiday Monday, a beautiful and very hot day, the dust was flying when our poppy buyer came down from Northants to see the harvester in action.  This is a new venture from last year, our previous buyer ceased operation last winter, and for a while we thought there would be no more Poppy growing, then processor Charles Jackson from Northants came forward with a contract for growing poppy seed for the culinary trade.  We jumped at this, and sowed 80ha of poppy in March.  A few weeks before harvest, Charles approached us and asked if we would be happy for him to take the whole crop after all, for morphine as before. So this has been done, the poppy straw is safely in store, and is now destined for Australia after processing in the new year! 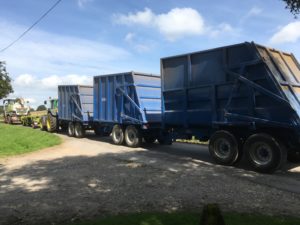 Here is the business end of the harvester, designed so that it cuts off the capsule, with a minimum amount of stem: 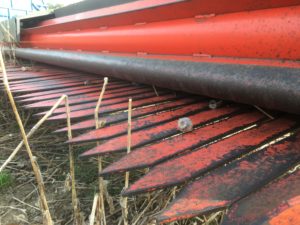 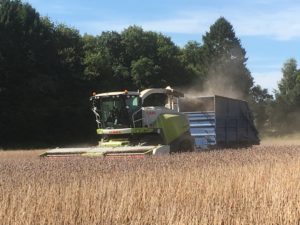 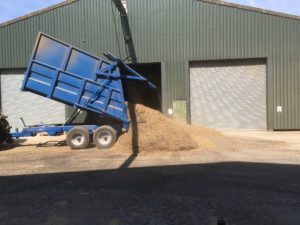 Here is the combine in action on bank holiday Monday, cutting the last piece of wheat in the Park, next to Knighton House school, being chased by the baler and loader keen to stack the bales as rain was forecast for Tuesday. 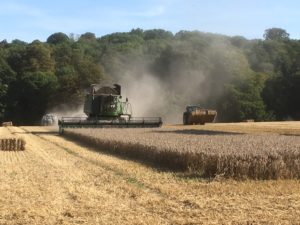 2017 harvest was one of the longest I can remember, having started on 7th July, we had hoped we were in with a good chance of an early finish and some relaxation time. Fat chance.  As many readers will recall, late July and much of August were pretty unhelpful weatherwise. The spring barley was a bit a trial to put it lightly, the season had already weakened its straw, and the summer rain knocked it down badly, so that when cutting we couldn’t get the header low enough and many ears were cut off and left on the ground, this cost us quite a lot of yield.  After the rain delays, the wheat was very ripe, and we were heading back towards normal harvest timing, and with even further delays we were right back to normal timing, only just finishing before September. 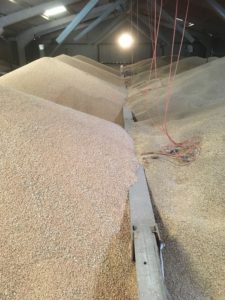 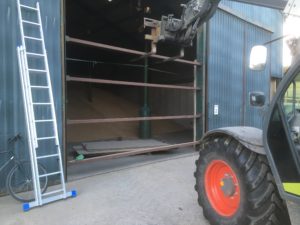 In the mean time the grainstores were filling up, and at various points doorways have to be blocked up so the grain can be stored up to full height.  The doorway is cunningly designed with steel beams and plywood boards hung on them, so it is possible for one person, with a forklift and a ladder to install.  Similarly simple to open up when the lorries arrive, the only slight complication is the avalanche of grain that envelopes all when you lift out the first board.

Over the years we have relied heavily on our grain store weigher, which every ton of grain passes through on its way to the store.  We like to know exactly what each field yields, so the weigher is essential.  For the last couple of years we have found that at the end of the selling year, we have had a pleasant surprise finding there is more in the store than we thought there was.  However as the discrepancy has grown, so has our frustration with the weigher.

Misplaced as it turned out. On one of the many wet days we set about trying to find out where the error was coming from.  Brendan took an empty trailer off to a weighbridge at Milborne and then returned there with a full load for accurate weights.  We then ran this grain through the weigher, it came through almost exactly right, so our anger with the weigher was obviously not fair.  A bit of head scratching followed.  We then ran the grain through the drier, followed by the weigher, 14 tons turned into 11 tons.  Suddenly a loss of 21%, where on earth was it going?  Weight loss from drying couldn’t account for more than 2 or 3%. 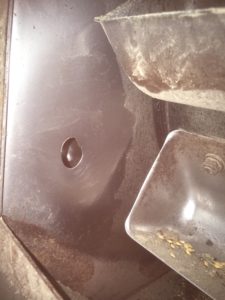 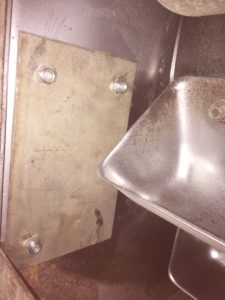 A trip down the pit with some spanners and a torch revealed a couple of holes worn by years of grain movement in the bottom of an elevator.  A proportion of the grain was bypassing the weigher and going straight to the heap, and yields were consequently looking somewhat lacklustre.  As the rain continued this gave us time to fix the problem, and then to test it with another load which had visited the weighbridge, this time a much more acceptable result was achieved, and from here onwards our yields miraculously rose to something rather more respectable. 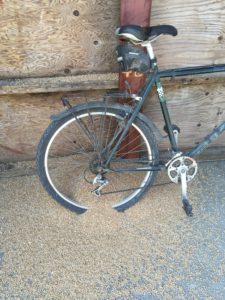 Don’t park your bike next to an overflowing grain store.

Since harvest we have been sowing the new oilseed rape crop, all done now and neatly rolled down with our shiny new rollers which arrived a couple of weeks ago, they are considerably more solid than the old ones and we hope they will last longer.  They are certainly doing a firmer job in the field. 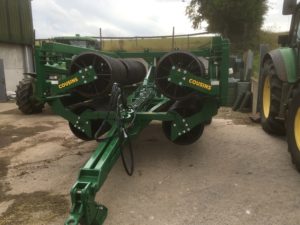 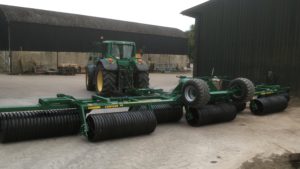 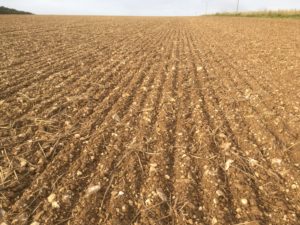 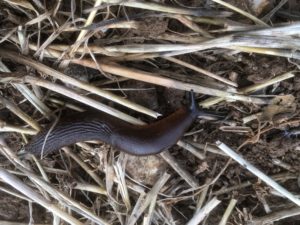 The continuing damp weather is encouraging these unpleasant characters to venture out of the headlands in search of delicate newly emerged rape plants.  Many gardeners will be too familiar with these creatures, slugs can demolish a good many young plants in a night, so we have to dish out some poison to keep them under control.  Spot the slug pellet.  Now ferric phosphate, not as environmentally controversial as metaldehyde, which is responsible for a lot of trouble with water supplies in some parts of the country. 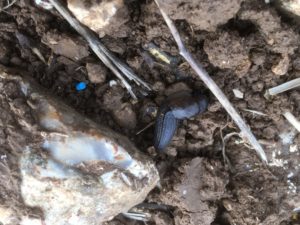 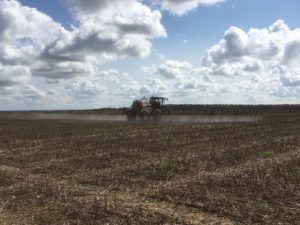 Here is the sprayer applying glyphosate (the chemical constituent of Roundup) to a weedy poppy stubble.  This chemical has been in the news lately as the EU authorities consider whether it should have its licence renewed for a further 15 years.  There has been a great deal of fuss made by the anti-pesticide lobby about this, and the anti Monsanto brigade.  Monsanto invented glyphosate, and are seen by some as the evil bogeyman of agribusiness, particularly as they have been prime movers in the development of GM crops in other countries.  Monsanto may be evil, they may not be, but glyphosate has been used on farmland around the world for the last 40 years, and for many years now has been manufactured by many other companies since it went off patent.  After nitrogen fertilizer it is the most cost effective and incredibly useful input we use in arable farming.  It enables us to control weeds very cheaply when there is no crop growing.  It allows us to operate a series of stale seedbeds in a field, this means we shallow cultivate to encourage weed seeds to germinate and then spray them off before we sow the next crop, several times if possible.  If we can do this effectively, it can drastically reduce the need for subsequent applications of other chemicals while the crop is growing.  This also helps when we are looking for strategies to avoid encouraging resistance to chemical control that is developing against many commonly used ‘in crop’ chemicals.  Glyphosate’s mode of action means that it is much slower than many in inducing resistance in target weeds, and even after 40 years there are few reported cases.

One further point worth mentioning is that glyphosate enables us to keep our soils in a healthier state than would be the case without it.  Too much movement of soil by excessive cultivation is detrimental to soil health for a number of reasons.  Using it to produce stale seedbeds allows us to establish crops without moving a great deal of soil.  If it is banned, we would have to return to more intensive cultivations, and even ploughing, in order to bury the most difficult to control weeds and hope they don’t regrow.

The combine takes a deep breath before launching into a lovely field of wheat: 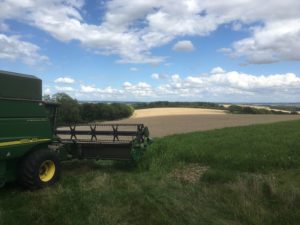 Here we are in the seat after making good progress in the same field, with just the one straight GPS guided line remaining to be cut in this land: 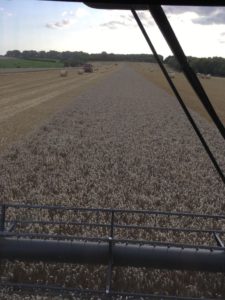