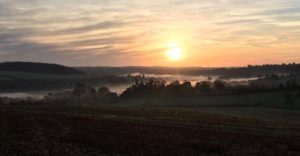 Brendan took this magnificent sunrise picture over Blandford last week, with mist in the river valley, and a sky that could have been painted by an Old Master.  Look online to see a larger version.

As the arable season draws to a close for winter, our autumn sown crops have been growing well, and apart from a little late slug nibbling here and there, most look good. I am sorry that my mention of pesticides in the September issue upset someone enough to write an anonymous letter to the Forum Focus, I would value the opportunity to debate the issue. The way I see it, when it costs upwards of £100 per hectare to establish a crop, £10 spent on slug pellets is a small price to pay to make the difference between a crop worth harvesting next summer, and bare soil.  It seems to me that we could not feed the world population with organic food, because the yield of organic crops is so much lower than ‘conventional’ ones. Very much more land would be needed to produce the same amount of food with organic methods. 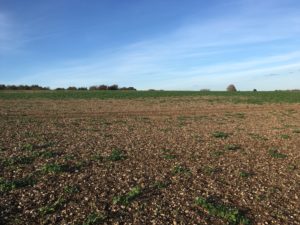 A patch where slugs have ruined the rape crop

Assuming that the majority of the most productive land is already in production, this means that a huge amount of less productive land, which is often of the most value environmentally, would have to be ploughed up to grow crops.  It is also the case that the best way to build fertility in soils enough to produce good organic crops, is to have animals in the rotation.  This then throws us into conflict with the vegetarian lobby.

The world food situation today could be summed up as follows:

We are on a treadmill of production and consumption.  The green revolution in agriculture over the last 65 years, fuelled with cheap oil and clever science, has caused the world population to balloon.   Improved healthcare, a reduction in world conflict, and religions which prohibit birth control have also played their part.  There are many mouths to feed, and the hungriest ones are not too bothered about how their food is produced as long as it is safe and nutritious.  Organic food is a nice idea, but it is more expensive to produce than conventional, and takes up more land. It is a niche market, aimed at the better off consumer.

I do not pretend that all in the UK countryside is perfect, I know of many things that can be improved upon, and spend much time discussing many of them with anyone who will listen. I would love to give up the treadmill of high input production and return to dog and stick farming, but I can’t see it paying the rent, unless Mr Gove backs up his words with huge amounts of subsidy to turn the whole country organic, and closes the door to cheap imports of food that we can produce at home.. (Why are there New Zealand apples in UK shops in October?) 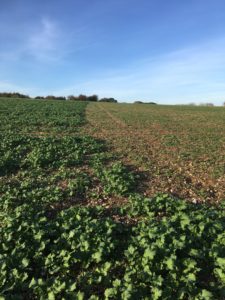 A field where some of the rape is good, next to a resown part, after destruction by slugs, which should now produce a crop next year 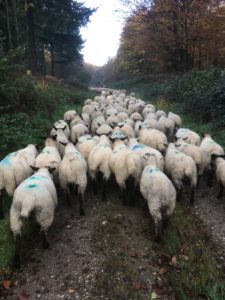 Last week we rounded up our recently weaned lambs, ran them through the footbath to treat any lame ones, and put identification tags in their ears to make them legal, before taking them on a long walk to their next grazing land, where they will spend the winter. It was a foggy morning to start with, but by the time we got them out of the yard the sun was breaking through, and it was a glorious hour long walk up the farm, trudging behind the lambs, who are very slow moving without their mothers to lead them. They love to stick their heads down at every opportunity, to find something tasty to eat on the verge as we go by. There is no point trying to rush them, otherwise odd ones will break back, in an instinctive suicidal move designed to save the rest of the flock, as if they are being pursued by a wolf, and they are the decoy to distract the hunter. 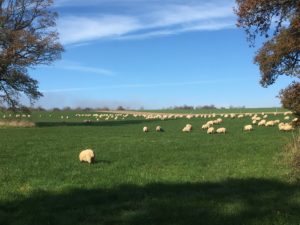 Here are the lambs on their new pasture in the sunshine 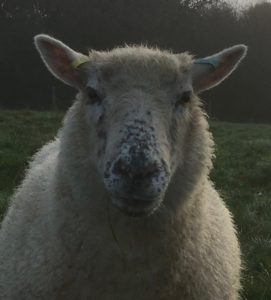 One of the pet sheep who helps out on school visit days.

This one was born in election year 2015, when they were all named after politicians. Her orphan brothers and sisters included Cleggie, Cam ‘n’ Ron, and Millie,  somehow she ended up as Maggie.

As well as the sheep work, in the last week we have managed to complete most of the autumn crop spraying programme. We have loaded out several lorries to take wheat to Hovis in Southampton, and Ryvita in Poole. We also started preparing the cows winter quarters, Gary had to move 30 tons of grain out of one shed, then 150 bales of straw into the same space, and then move out various machines and pallets of accumulated stuff to clear the barn ready for strawing down. The mild weather has meant the grass has continued to grow, so the cows haven’t needed to come in quite yet. The cooler weather of recent days is slowing it down now, so it won’t be long before they will be tucking into silage in the shed at Shepherds Corner. 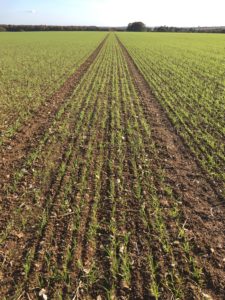 Lovely straight drilling by satnav.  The driverless tractor is nearly here, now you can buy and sell grain and check prices from your phone in between headland turns.  I know one farmer who is planning to buy a drone to check his animals every day, to save time and fuel bumping around distant fields.