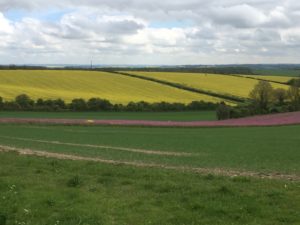 A streak of red campion in the pollen and nectar mix contrasts with the rape coming to the end of its very long flowering period.  The campion seems to be dominating the mix, and once it has gone over I wonder what will be left in its place, it hasn’t left much room for the clovers, phacelia and trefoils that are meant to be there with it.

The dry weather continues, with a brief wet spell at the turn of the month, which gave the crops a desperately needed drink.  Coupled with the very cold nights we seem to keep having, this has turned into a peculiar spring, grass growth has slowed, and cereal crops are looking patchy due to moisture variation in the soil.  We are now running at nearly 10 inches of moisture deficit compared to an average year.  Let’s hope it doesn’t all fall at once! 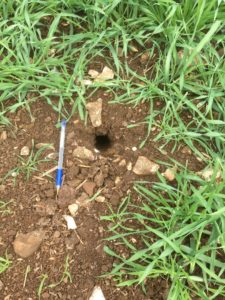 Who lives in this hole, and are they enriching our soil?

On attending an “Enrich your soils” event last week, we learnt, amongst many other useful things, that for every percent we can increase the organic matter in our soils, we increase the water holding capacity of the soil by around 17mm in terms of rainfall.  This has huge implications in terms of flood prevention, 17mm is quite a lot of rain, (nearly ¾ inch in old money), and if this falls in a short time, is enough to cause flash flooding.  If farmland can absorb quantities like this then flood risk can be alleviated.  Wessex Water have been funding courses of this kind in order to educate farmers how to improve their soils, and to enable them to do more than just act as a medium for growing food.  One of the keys to healthy soil is the organic content, made up of decomposing crop residue, and a huge range of fungi, bacteria and larger organisms, such as worms, which all work together, often eating each other, and when combined with the rootmass of a growing crop, form an inter-connected web of activity and nutrient transfer.  The organic fraction of a soil, ideally at least 4 or 5%, is responsible, as well as holding water, for holding nutrients in a form readily usable by plants, and preventing them being washed through the soil profile, which can end up polluting ground water.  Many arable soils are near 2% organic matter, and farmers are rapidly learning that for successful crop growing, we need to build these levels, not see them gradually diminish further.

To enhance soil OM we can add manure, or grow soil improving cover crops, and a big difference can be made by altering what we do to our soils with machines.  Excessive cultivations can deplete soil OM, by exposing fragile soil components to the air, they oxidise and can be lost to the atmosphere, or washed downwards through the soil profile by rain.  Not only this, but cultivations can upset the soil’s inhabitants, such as worms, nematodes, fungi etc, who all make important contributions to soil health.  The art is to do as little as possible in order to form a decent seedbed, and then leave it alone so the beasties can get back to work. 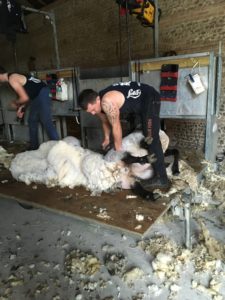 Sheep shearing champion Dean Nelmes called round on May 2nd with his shearing team, and polished off our 264 sheep in short order before lunch.  They had to finish with our pet sheep flock, tame sheep are often a bit of a pain as they don’t behave like normal sheep.  Rocky our 5 year old wether, in particular, he is huge, and can be very stubborn, however Dean got the better of him in the end.  For video of Dean in action at the Dorset County Show, there is an entertaining interview with former Durweston resident, reporter Steve Humphries on the BBC website, it includes a sheep being shorn in just 30 seconds, and an attempt by Steve to shear a sheep himself. 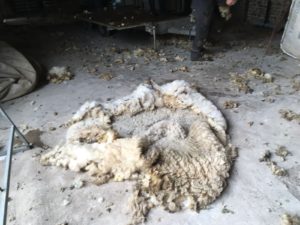 Within a week of shearing the ewes have started lambing.  Among our small pet flock, made up of former orphan lambs, four out of six have already lambed, one of them being Sammy, who is now seven years old, on Monday evening she gave birth to her 17th, 18th and 19th lambs.  She is exceptional, having borne triplets for 6 years running.  The trouble is that a few years ago she had a dose of mastitis, which reduced her milk production, and she has never been able to rear 3 at once, so one (or two this year) have had to join the gang of orphans.  We decided to pension her off last year, and prevent her from getting in lamb, as she is now quite aged in sheep years, and we felt another pregnancy might finish her off.  However once she was shorn it became rather obvious that she was in lamb anyway, which seemed a bit of a mystery until we discovered that she may have spent a few hours with the rams when they were delivered in December.  Bearing in mind that the ewe is only receptive to the attentions of a ram for approximately 30 hours in a cycle of 17 days, this was a bit unlucky.  Anyway we have 3 healthy lambs, one still with her mother.  This is also a lesson in birth control. 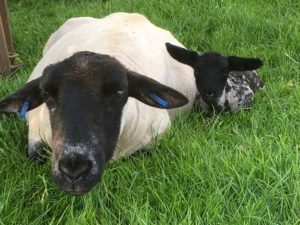 Sammy is always good value when we run a school visit, she is fearless, and very greedy, never put off by a crowd of 25 school children, she always has her eye only on the stale toast that all the sheep seem to love.  We have kept a record over the years of what lambs the pet sheep have produced, and of Sammy’s offspring, we still have Tilly, who had 3 lambs herself this year, and Tiger, who will only lamb for the first time next year.

During the first few days of lambing, we have suffered some bad attacks by foxes.  One of Tilly’s triplets was taken on the first night, so we penned them up for the second night, then another, large and strong lamb was taken on the third night.  It is unusual for foxes to be bold or strong enough to take anything other than newborns, so steps are now being taken to try to stop this happening. 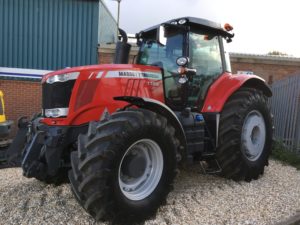 C&O Tractors Ltd shocked their farmer customers last week by announcing that they are ditching their long standing relationship with New Holland, (Blue tractors) and from now on will be selling Massey Ferguson tractors and combines (Red).  This is unprecedented in the farming world, the relationship between farmers, their preferred make of tractor, and their dealer is a complicated one.  C&O are making a risky and unusual move, however if they can carry their customers with them, and the Masseys turn out to be as good and reliable as is claimed, then maybe in the long term this will prove to be a very daring and ultimately successful decision.  It is a long time since we bought a blue tractor on this farm, and a good deal longer since we bought a red one.  Many readers will I am sure remember C&O’s predecessors Stanley Pond Ltd, who took on Ford Tractors in the 1970’s, in place of …… yes, Massey Ferguson. 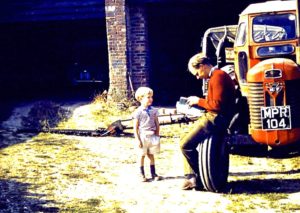 From the archive, I have found a picture of the earliest Massey Ferguson I can remember on this farm.  There has only been one other since then.  The farmer in the picture is consulting the instruction book for the old fashioned finger-bar hedge-trimmer that is hitched to the tractor.  He is clearly receiving valuable help from his assistant. 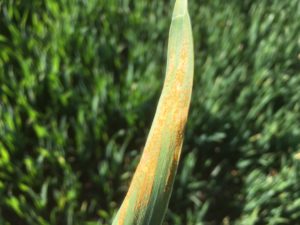 Some of our wheat crops this year have been suffering from newly developing races of yellow rust, and even new varieties which are supposedly resistant are breaking down rapidly to this damaging disease.  Extra doses of fungicide are being used to dampen down this epidemic, and a new policy will have to be developed for next year, to try to avoid the embarrassment of patches of yellow rust showing in some of the fields.  We will have to change our ideas about which varieties to sow in the autumn.  These decisions were already set in train last year when we sowed the fields which will provide next year’s seed.

The Bluebells and wild garlic have produced a beautiful show of colour in the woodlands. 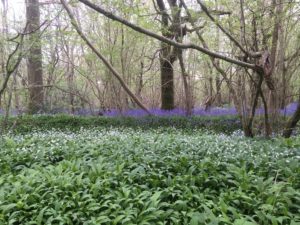 The rape has flowered for pretty much the whole of April, and is now taller than it has been for several years. 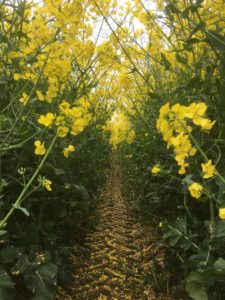 Someone was a bit tired, and decided to lean on the nearest convenient soft thing 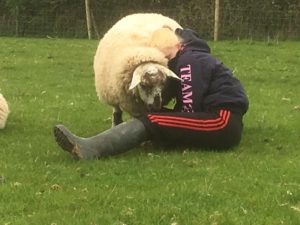