The wind rippling the spring barley on Shillingstone Hill under a fluffy sky.

We were almost crying out for rain as I wrote this column last month, what a difference now, everything is a healthy shade of green, the crops are growing like mad and every sunny day builds more biomass in the fields.  The wind and rain last week, which gave us a 9 hour power cut, also flattened some of our barley.  The winter barley and oilseed rape have almost got to the point where all growing is done and they are about to start the downhill run towards harvest.  The wheat is done with flowering and now the grains are developing in the ears, hayfever levels were very high when I went crop walking in the wheat last week, the air was thick with pollen.  The poppies are growing inches daily, and will be flowering very soon in the most forward fields, the first one or two blooms have appeared today, complete with pollen beetles and one or two other assorted beauties. 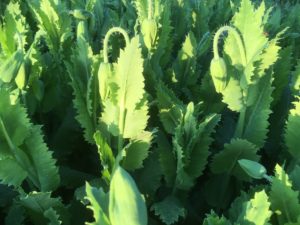 Most poppies are at the hook stage right now, but a few early mavericks have appeared in the last couple of days. 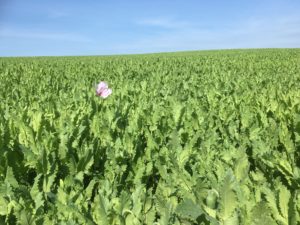 A blob of pink in a sea of green. 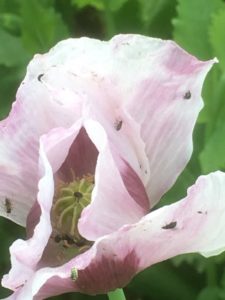 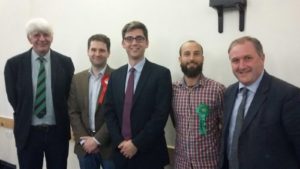 At the end of May I had the chance to join in a grilling of the four parliamentary candidates for North Dorset at a farmer meeting at the Exchange in Sturminster Newton.  Each was given an opportunity to introduce themselves and to explain why we might like to consider voting for them, then the audience were invited to ask questions, and each candidate answered in turn.  It was extremely disappointing to find how little homework had been done on matters agricultural by half of the candidates standing in our predominantly rural constituency.  The Green and Labour candidates were woefully under-informed about many matters which are of great concern to farmers.  Our sitting MP has been a positive force for farmers since he was elected, and until the recent election has held a post in DEFRA, and the young Libdem candidate had certainly done the homework required to suit his audience, giving positive and sensible answers to questions.  Things got interesting when questions relating to education, foodbanks, and the demise of the milk marketing board were raised, and our chairman James Cossins had a job on his hands to keep things under control.

As I may have mentioned before, farmers have been feeling particularly vulnerable since the referendum vote last year, and the recent election will do nothing to allay this.  The appointment of Michael Gove, arguably the politician most responsible for the result of the referendum, as the new Secretary of State for Environment, is a move none of us had foreseen, and we await to see what he makes of the job with a degree of nervousness. 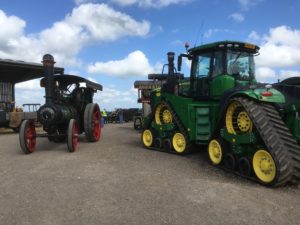 Farmers were out in force for Open Farm Sunday last weekend, and I was roped in to help out at Peter Snell’s farm at Horton, where some 1800 people flocked to the farm in the sunshine.  There was plenty to do and to look at, including these contrasting machines, probably 100 years apart in age, and at least 500 horses apart in power.  The green one is the famous machine which featured on these pages last year as the first of its model to arrive in Europe from the US.

Just out of view in the picture the green giant is hitched to a 12 furrow reversible plough, which can be viewed in action on youtube at https://www.youtube.com/watch?v=lHdtzp5je70.  It is a wonder of first world productivity and capital investment, whereas the following picture shows how the same job is done near a small town called Coracora in Peru, where a family member has visited recently, and helped to keep the 2 ox-power ploughing outfit engaged with the soil, by leaning on it. 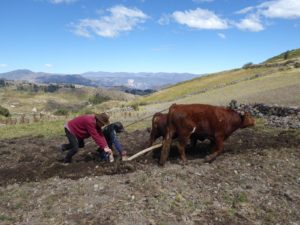 The game and wildlife conservation trust have been carrying out some experiments here recently, using recording equipment, and sticky paper, to learn more about the local bat population.  The recorder can hear the bats as they patrol the hedgerows, and the sticky paper will help to establish the insect population and in turn how it influences the bat population. 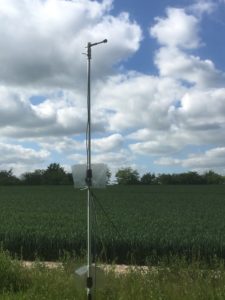 A small tribe of orphan lambs has established itself once again, noisily demanding warm milk at least 3 times daily.  They are now around 5 weeks old, and extremely greedy, sometimes they drink so fiercely that they pull the teats out of the bottle, and all the milk pours onto the ground.  There is no loyalty between them at all, and they will battle ferociously to get the largest share of the milk on offer.  A firm hand is needed to make sure all receive their fair share.  They don’t care how uncomfortable it is to reach the teat. 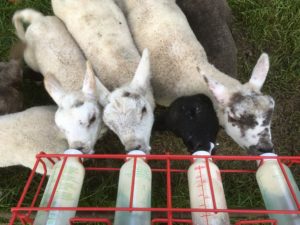 After the application of rubber rings about 3 weeks ago, the lambs tails have been falling off.  This may sound cruel, however a woolly tail is very good at collecting poo, which will then attract flies, from which maggots will surely develop, which is a far more cruel fate than a few hours of numbness in the tail region.  Maggots will eat an animal alive. 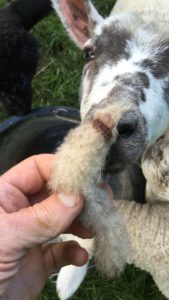 We have had a regular stream of school visits to the farm this spring, only one had to be postponed due to heavy rain.  We have enjoyed showing what is going on around the farm.  We usually visit the sheep with lambs in the fields,  the cows and calves, who are being entertained by the bulls at the moment, we look at growing crops and encourage the children to pull the crops apart to discover where the bits we eat come from.  We also explore the woodland to learn about various plants and trees, including finding out the difference between bracken and fern.  If any teachers are reading this and would like to enquire about bringing classes to visit us, please get in touch via the website.  The visits are free, and a new scheme offered by the Dorset County Show 1840 fund now aims to help schools with the cost of transport to get out onto farms for educational visits.  Our visits usually end with a session bottle feeding the orphan lambs, and then a bit of a free for all, feeding toast to our older tame sheep, led by our old friend Rocky, the huge tame wether, who is now 5 years old. 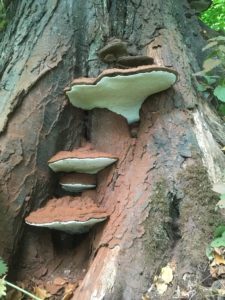 Exploring in 4 Acre wood yesterday, where Durweston School are establishing a Forest School, we came across some spectacular bracket fungi.  How long has a bracket of this size taken to grow, and is the rust-coloured covering of the surrounding trunk simply fungal spores, and is it harmful?  The wild garlic that a few short weeks ago was forming a beautiful lush green carpet all over the woodland floor, punctuated with pretty white flowers, is now all dying off rapidly, and just looks like a well trampled field. 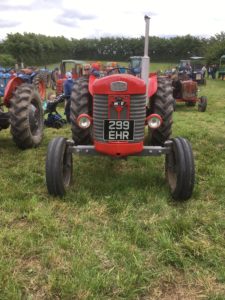 At a charity fund raising vintage tractor run at the Shaftesbury Estates, Wimborne St Giles the other day, amongst all the other tractors present I was pleased to discover a beautifully restored MF 65 tractor, the same model as the one from my childhood, featured here last month.  Not only this, but I found myself in the company of fellow Field Marshall enthusiast, Mark Farwell, who impressed by managing to start his very smart Series 3 model (Green) on the starting handle, a feat that I have never mastered with our Series 3A (Orange), instead always having to resort to a tow start.  We pop-popped all around the estate for a couple of hours, then finished with a view of the impressively restored house and gardens, before being plied with a barbecue lunch in the gentle rain, which had held off until that moment. 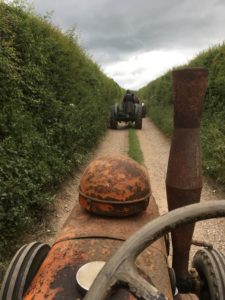 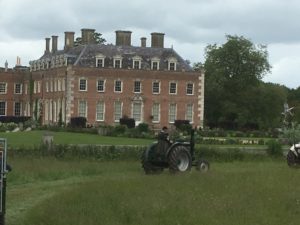 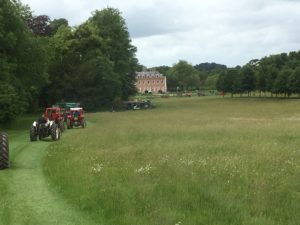 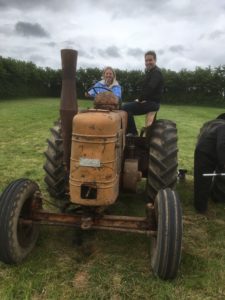 The Field Marshall was revolutionary for its time. It has a single cylinder horizontal diesel engine, it had a lot more power than the 4 cylinder petrol/TVO engined tractors popular at the time, which were tricky to start and required a lot of tinkering.  Points and plugs always cause problems.  You can’t get much simpler than a single cylinder diesel, no spark required, just a squirt of fuel from an injector, and compression provided by the momentum of the huge flywheel on the side of the engine.  When cold in the mornings, you insert a rolled up piece of cartridge paper into a screw-in holder in the cylinder head, having lit it so it smoulders, this helps the engine to fire the first few times while you crank the handle.  For those not quite man enough to crank the handle, there is another way to start the engine, this uses a cartridge, as in shotgun, but with no lead, there is a place to insert it, you then turn the engine until the piston is in the correct position, then give the cartridge a whack, and the explosion is sufficient to turn the engine until it fires.  I have never yet seen this done, and cannot believe it would be good for the long term health of the engine.  Personally, I favour a tow start, but this does require the presence of another tractor, which of course must already be running, and a clued up driver.

There is, unsurprisingly, no syncromesh in the gearbox, so changing gear is an art, you have to hold the clutch pedal down until the external clutch stops turning, then shove the lever into the correct gear and hope you don’t have to change it too often.  It is hard not to grind the gears when manoeuvring.  Marshalls were popular for driving thrashing rigs, and often replaced steam engines for this job, the clutch pulley has a belt run around it and this drives the long belt attached to the thrasher. 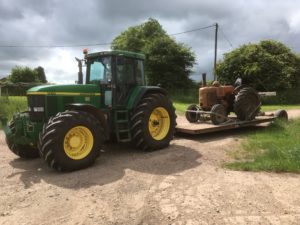 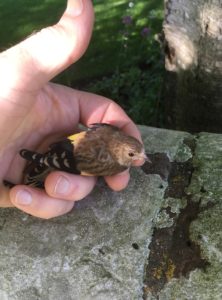 A young Goldfinch which I found fluttering dangerously in range of marauding cat or dog near the farm yard. 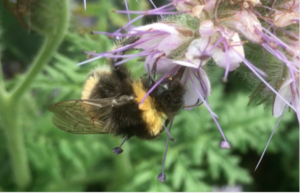 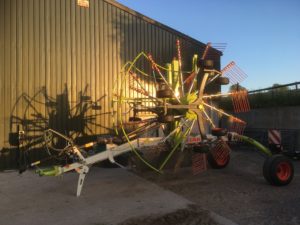 We have been making silage while the sun shines, and this rake is very handy for pulling the grass into neat lines when not making artistic patterns as the sun goes down.