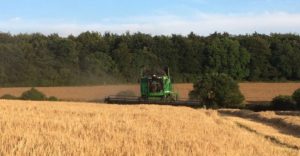 Phew, winter barley in before it rained!  The last 4 weeks have been frantic.  The month started with a bug hunt with Durweston School, wild oat pulling, grainstore cleaning, and crop judging on the urban fringe, and finished with the winter barley harvest in the barn, and the nation’s real ale supply safe for another year. 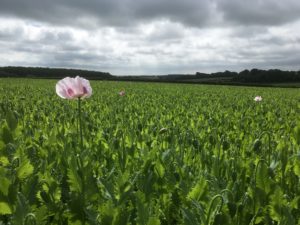 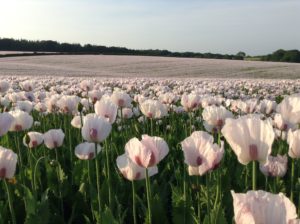 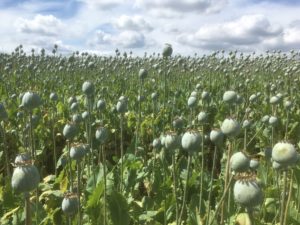 Along the way the poppies have flowered, shed their petals, and expanded to plump capsules in double quick time.  The very warm weather of the last month has kept disease at bay and has enabled our most of our crops to end the season clean and photosynthesizing like mad in the sunshine.  On the very hottest days the wheat’s leaves roll up to conserve moisture, and then photosynthesizing slows right down.  Luckily the really hot weather didn’t go on for too long, and the wheat and spring barley have been able to senesce (ripen) in their own time.  The winter barley and the rape however have hurtled towards a very early harvest, and between Thursday evening (July 6th) and Monday afternoon (10th) we cut all 200 acres of the Maris Otter, and even most of the straw was baled before the rain came on Tuesday. Due to the weather harvest started the earliest it has since 1989, when we were one day earlier. The barley seems to have yielded better than usual, and we nervously await quality test results to see if it makes the grade for the best ales this year.  The rape could be ready by next weekend if the weather perks up again. 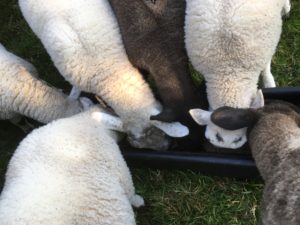 Our six greedy orphan lambs have at last been weaned off milk, which they have taken a pretty dim view of, they are very noisy when they don’t get what they want, but have gradually developed a taste for weaner pellets, and tuck into them vigorously, they seem to have turned into pigs.  They push and shove each other with astonishing violence, such greed is quite awesome to behold.

Crop judging on both sides of the M25 in Surrey and Kent on the hottest day of the year was hard work, with 25 different crops to look at and mark out of 100 for 6 different characteristics, we covered over 200 miles in the day, ending up with the top 3 in each of the 3 classes for Winter and Spring Barley, and Oilseed rape.  On getting home after such a trip, it is fun to reassess ones own crops, and mark them in the same way.  Dorset always wins of course!  We certainly have fewer weeds in our crops.

On one of the farms we visited we found an interesting diversification from regular arable cropping, in the form of lavender, which is harvested for the oil, when flowering it looks and smells wonderful. 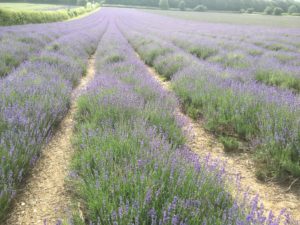 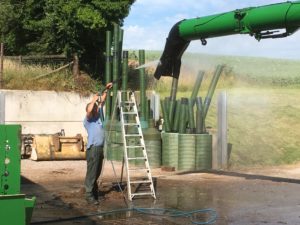 The combine has gone from dusty in the tractor shed, after 10 months idle, to shiny clean, to filthy dirty again from the dusty barley, all within a week.  Even at 10 years of age, the old girl still brushes up well, looking nearly new on the outside. 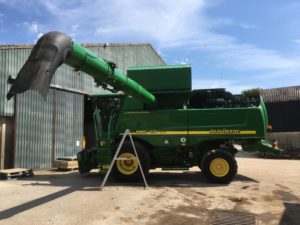 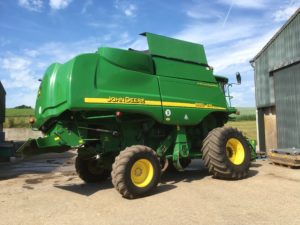 At the top of the page she is opening up the first field of 2017.

Our straw sale took place a week later than it should have done as it turns out, we actually cut the first couple of acres before the sale, but had to hold off from any more, it would not have looked good for the straw sitting in its rows to be rained on before being sold.  The 18th Annual Straw sale took place last Friday, jollied along by the now habitual French bread and Wyke Farms cheese, washed down with a variety of refreshments, including the delicious Flack Manor Double Drop Ale, brewed in Romsey, using only Maris Otter barley malt. 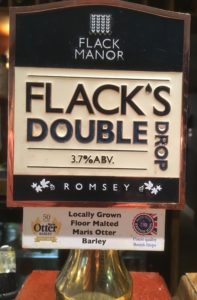 Our friends at the Langton Arms helped us to ensure the beer was delivered on time.  The sale rattled along in the shade, as farmers gathered to buy, to sell or simply to spy on the prices achieved.  The sun shone brightly outside, prices were good, and afterwards many stepped briskly homewards with thoughts of nothing but hopping onto their combines and getting started on the 2017 harvest. 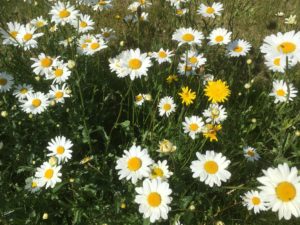 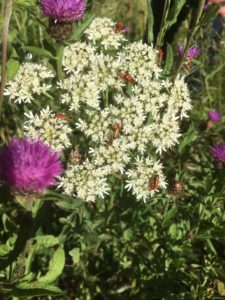 The wild flower margins around our arable fields this year have thrived in the dry weather, and have been buzzing with all kinds of insect life, which in turn feeds the birds.  We had the oxe eye daisy phase first, and now we see Ladies Bedstraw, birdsfoot trefoil, knapweed, scabius, musk mallow, wild carrot and others taking their turn, each favouring a different range of insect life. 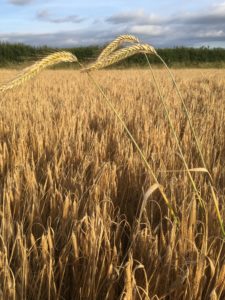 A rogue triticale plant amongst the ripe barley a couple of days before we started cutting. 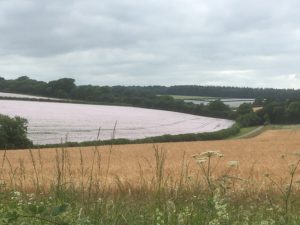 Flowering poppies stretch away into the distance beyond Shepherds Corner 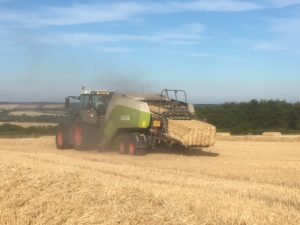 Adam Coleman’s straw team were soon into the barley fields to wrap up the straw whilst it was nice and crispy dry.  The last three fields got rained on so needed a bit of fluffing up to dry out when the sun came out again a few days later.  Adam’s baler man Roger has got a lovely shiny black new Fendt 939 to drive the baler. 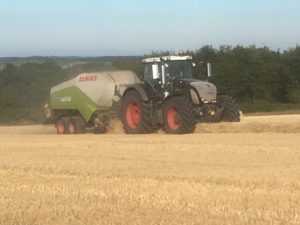 The barley soon found its way into the barn, no drying needed so far, it was very dry, however grain size, as is often the case with the Maris Otter, meant that we had to run it all over the screen cleaner at a rather steady 5 tonnes per hour to take out 5% of the smallest grains. 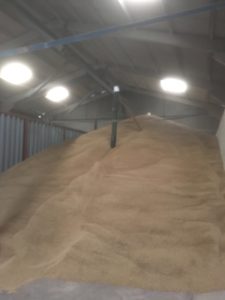