After 96 mm of rain, nearly 4 inches in a week, the riverbank is bound to lose the battle to contain its contents, hence we had water all over the meadows at Durweston for a short time at the end of last week, it also came up close to the Marsh and Ham car park in town.  We were bound to get payback at some point after all that lovely dry weather. 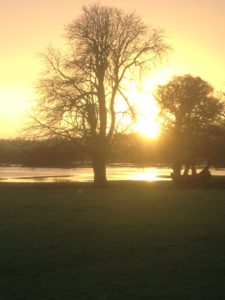 The cold weather before the rain was very welcome, slowing down disease in crops, and killing off some of the more sensitive weeds.  Strangely, although one would expect such weather to be good for the animals too, but sadly we have had a couple of cases of pneumonia amongst our young cattle, and in spite of several doses of treatment, one of them couldn’t beat it off, and succumbed at the end of January.  The other seems to have picked up. 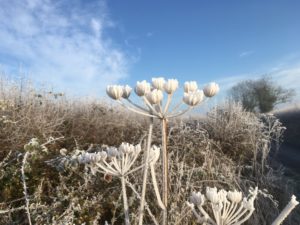 On several days it got cold enough to freeze up the water troughs, we have to remember to go round to the outdoor animals and smash it up and remove the ice, otherwise it will soon refreeze on those days when it doesn’t get above zero. 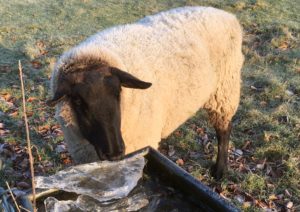 Some folk are pleased about this, like Rocky, our very tame and friendly wether, he is always inquisitive, though he didn’t seem to actually want a drink.  All our school visitors meet Rocky, and many have fed him toast, which he likes much more than grass.  We save up our stale crusts for him on visit days. 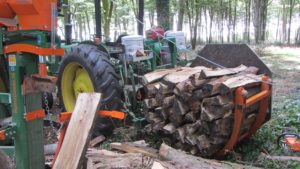 This month Gary and Brendan have spent many hours cutting and splitting logs, well seasoned after lying in the cord in the wood for a couple of years, they need just a few months under cover now, and will be all ready for next season.  We still have plenty in bundles to keep us going for this winter.

We have a system for log production:  The process begins with a skilled man coming into the woodland to fell the trees that are ready to be harvested.  He then cuts them into metre cords, which we generally leave on the ground to season for a while.  The next operation is to bring in the splitter and split the cords into log sized billets, which are then stacked on the bundler as shown in the picture.  When complete the bundle is tied, and tipped onto the ground.  The bundles are now easy to move with our forklift, and are left in a corner of the wood to season for several more months.  Eventually we bring the bundles indoors until they are dry enough (below 20% moisture) to cut into logs with the log cutting machine, and pile up in the log store.  The trick with the splitting is to do it while the cords are still green enough, if too dry, the billets don’t cleave particularly well, and we get a lot of annoying shorter scrappy lengths.  We had a bit of this trouble recently with some timber that had lain in the wood for too long, and the best way to deal with it in the end was to cut into log lengths before splitting, which was quite a lot more work, and involved a lot more bending and lifting than if we had done them when green enough to split properly. 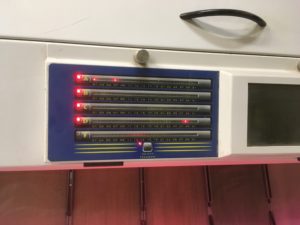 A visit to a company in the midlands last week, to discuss new markets for some of our produce, was very instructive.  Amongst other things, this company specializes in processing ex-farm grains for breakfast cereal makers.  It was very surprising to find that 100 tonnes of average ex-farm wheat would need to have 15 tonnes removed by a variety of cleaning machines before it looks good enough to be turned into breakfast cereal.  Several cleaners, blowers and graders are used, as well as a colour sorting machine, which, at a rate of 10 t per hour, photographs a fast moving stream of grain, and with tiny jets of air, can divert the poorer grains into a different chute which then sends them to join the other reject grains in a bin that will be sold for animal feed.  Only the best for the fussy humans!  The panel in the picture shows a red light flash every time one of the many cameras detects a sub-standard grain as it falls through the sensors behind, and in the part just below the picture, the little air jets do their very quick and accurate job. 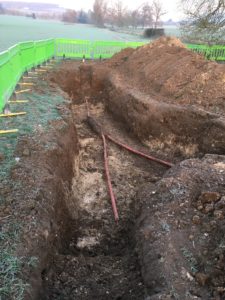 Some readers, mostly in Durweston, will recall a series of power cuts at the end of January, it turned out that moisture had got into a large underground joint near Bryanston, which took quite a while for the engineers to find.  Many properties were fitted up with generators while the fault was dealt with.  The size of the cable is impressive, although it is disappointing that technology from only around 20 years ago cannot seal a joint sufficiently well to prevent such a breakdown. 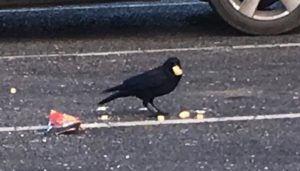 A crafty crow was spotted helping himself to a spilt packet of hula hoops in the Tesco car park last week, it was quite a challenge for him to pick up two hoops to carry away with him, but he managed it in the end. 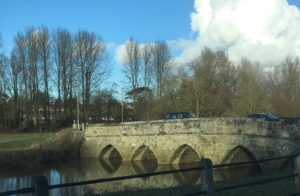 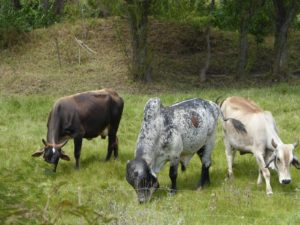 Colourful Columbian cattle spotted recently by a travelling member of the family, and a full moon rises over a gate. 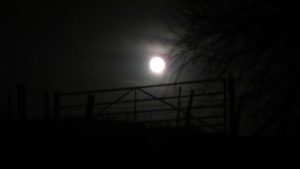