A major event for tractor fans, especially green tractor fans, has occurred this month.  Sitting on the forecourt of our local John Deere dealer, Smart Ag services, right now, is a monster the like of which has never been seen in Dorset before.  John Deere have recently started to build their most powerful series of tractors in a quadtrac form, and the first to be sold into Europe from their US factory in Illinois is going to a farm in Dorset. 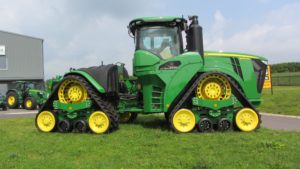 This 620 horsepower beast will be the envy of many tractor nuts for miles around, and the salesman who sold it has landed himself the sale of the decade, the sad thing is that he moved to Australia before the he could deliver the machine to its new owner. 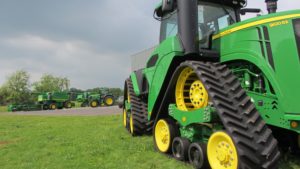 On our own farm this month we have enjoyed a long sunny dry period which has seen all our crops growing very fast, the winter barley and wheat is now all in ear and has had the last sprays which will hopefully see them safely to harvest.  There has been a grand battle going on in the fields of wheat across the country this season, with many varieties succumbing to a new race of yellow rust disease which has hit them hard, when they were previously meant to have good resistance.  Fungicide sprays should be able to hold the disease but it has meant that more spray has been needed this year where natural resistance should have been enough to keep it at bay.  My photograph below shows what it can do to a leaf that should be a nice healthy dark green, this was on a plant in the corner of a field where the sprayer does not always reach.  If the whole field looked like this we would be looking disaster in the face.  The rust destroys the green leaf area which can then no longer photosynthesise, it will then form yellow pustules of spores which then spread by wind or rain splash to other plants. 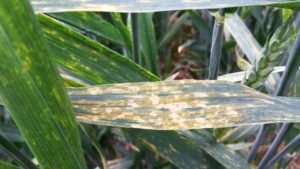 It is interesting to contemplate this whilst reading in the press of the shenanigans in Europe over the re-licensing of Glyphosate, the active ingredient in the weedkiller Roundup.  A group of green MEPs cleverly decided to make a point about this herbicide by getting their urine tested, and found that glyphosate was present, in tiny amounts, but at levels which are higher than those allowed for any pesticide in drinking water.  Some may find this alarming, but to me it underlines what I have believed for many years, which is that the tolerance levels for pesticides in water are vanishingly small compared to many commonly accepted poisons such as arsenic, cyanide and lead.

The organisations campaigning to ban Glyphosate clearly have their sights set on Monsanto, who have long been seen as the greatest bogeyman on the world agribusiness stage, mainly for their work with genetically modified crops, some of which are resistant to glyphosate.

To get all worked up about glyphosate seems to me to be a bit of an over-reaction, this chemical has been used very widely on farms all over the world for the whole of my working like, it has enabled food production to become cheaper and more efficient many times over.  To ban it in Europe will require the biggest change to food production methods one could imagine, far more fuel will need to be used to cultivate soils to control weeds.   Where one squirt of roundup will clean up a stale seedbed overnight, a tractor and cultivator will need to till the soil several times over to have the same effect, reducing the soil to dust thus making it more likely to be blown away, or washed away by heavy rain.

Not only this, but while Europe may ban this herbicide, as they have with many others before, the rest of the world will laugh at us once again.  Most of the grain producing areas of the world are still using many chemicals that were banned in Europe years ago, meaning that they can grow their crops more cheaply than we can, and then export them to us mugs in Europe, undercutting European farmers.  It is the same with GM soya, which is not allowed to be grown in Europe, but we still import thousands of tonnes of it to feed to our animals, how sensible is that???

One health organisation has told us that glyphosate ‘probably’ causes cancer.  That is not a very scientific statement.  We know that exhaust fumes, cigarette smoke, alcohol and ‘probably’ mobile phone and wifi signals also cause cancer, but we happily accept those risks.

If glyphosate is firmly proven to cause cancer, and by which route into our bodies then I will happily accept that we will have to change our practices, but until properly proven let’s not get too worked up about it. 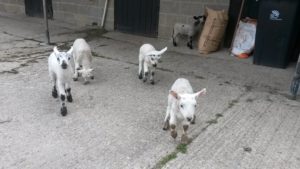 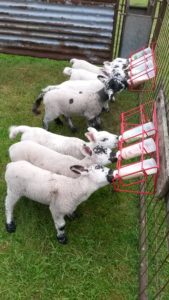 Lambing has drawn to a close, we have many happy lambs gambolling around the fields, and a merry band of 6 orphans in the back garden, still being fed 3 times a day.  Last week a hard working team rounded up each group of sheep to administer vaccine, wormer, anti flystrike spray, and to apply rubber rings to those delicate parts that those poor lambs didn’t realise they didn’t need. 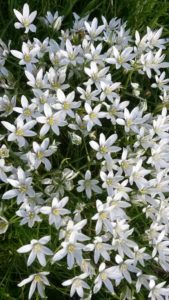 There is a strikingly pretty flower which appears at lambing time every year in one of our sheep paddocks, which I always forget to look up in the book.  This year we have managed to identify it whilst flowering, and it is the Star of Bethlehem, a winter bulb belonging to the lily family.  It is similar to wild garlic, and I have discovered that it is unwise to cultivate in your garden as it will swiftly smother out other less vigorous species, some even consider it a noxious weed.  I will watch it with care. 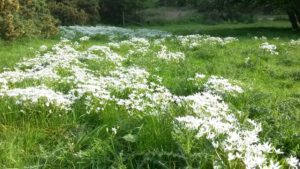 Another noxious plant which we have had to take steps to destroy is a small patch of Japanese knotweed, it is officially a noxious weed, and it is quite clear why, now I have seen it in action.  It spreads via rhizomes (long roots) in the soil, and can only be controlled by repeated and robust glyphosate applications (see above), so that the rhizomes eventually become exhausted by repeatedly killing off the top growth.  It probably originated by some kind person dumping it on a verge by a field entrance, and it has steadily increased its size between a hedge and a bit of waste ground, where it has increased in size for a couple of years without being noticed.  Our sharp eyed agronomist noticed last year that it had got into the hedge, and once we realized what it was it was too late to save the hedge.  The worst thing you can do is to try to dig it up, because every bit of rhizome fragment has the ability to start a new plant, and the spreading will be even worse 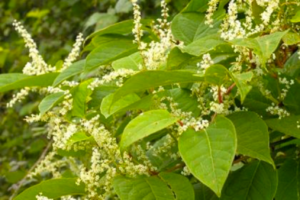