This month we have been getting on with a number of regular winter jobs, such as feeding animals, loading grain lorries and a spot of fencing, as well as some more irregular jobs such as renovating an old pond, and taking delivery of new fertiliser tanks.

We use liquid nitrogen fertiliser on our arable crops, its main advantages are that it can be applied by the same machine that we use for spraying, it can be accurately and reliably applied to the full width of the machine and isn’t vulnerable to wind in the way that granules are when spread by a spinning disc spreader.  It is also very easy to handle using pumps, and to store outdoors in large fibreglass tanks.  Good old fashioned solid fertiliser must be stored inside secure and weatherproof buildings, and requires a machine to unload it from lorries and to fill the spreader.  There are also the empty bags to dispose of afterwards. 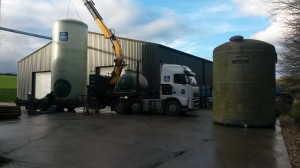 This year our fertiliser supplier agreed to replace three of our old 28,000 litre tanks with two new ones, which will hold a similar amount between them.  This will make management of the different grades of fert that we use a bit easier, and they will be neatly filled by two whole lorry loads each. 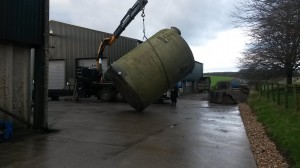 These photographs show Mark the trusty tank man installing a brand new 50,000 litre tank, before taking away the old one.

We have loaded out quite a lot of grain this month, we have sent barley to a boat at Poole quay, and wheat to another in Portland harbour, these ports can generally only fit small boats or coasters, these can carry 3-4,000 tons, and will usually be taking the grain relatively short distances across the channel. 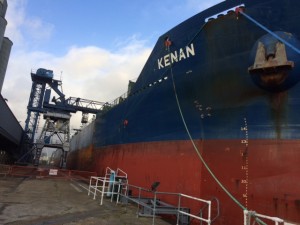 One of our wheat contracts this month has been delivered to an enormous ship at Southampton docks, it can carry 75,000 tons when fully loaded, although I understand this time that it was taking 35,000 tons of wheat, and 12,000 tons of barley down to Spain.  One of the lorries this month was sporting the picture of one of our local buyers, quite amusing to see his cheerful face on this scale whilst I was filling the lorry. 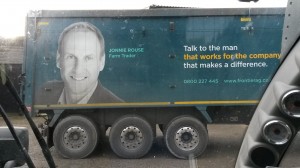 After my mention last month of some old honey comb found in a hollow tree trunk, I was called by a friend in a neighbouring village, who keeps bees, to answer my question about what kind of bees might have lived here.  He tells me that the varroa mite has decimated the bee population to such a degree that very few truly wild honey bees remain at large.  He believes that if it weren’t for human intervention, such as is now the norm for domesticated honey bees, there would be very few about at all.  Beekeepers regularly treat their hives to keep the mite at bay. 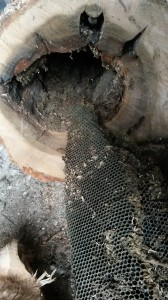 A couple of the younger members of the extended family have been farming on the other side of the world for a few months.  This has given them a taste of how it’s done down under, some involving irrigation with wonderful centre pivot sprinklers, and there has been plenty of driving of huge machines.  They have been in farming heaven.  It’s all going to seem a bit small and green here when they get home. 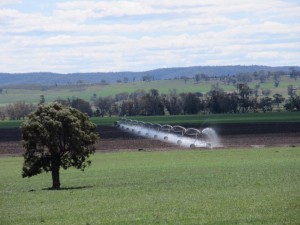 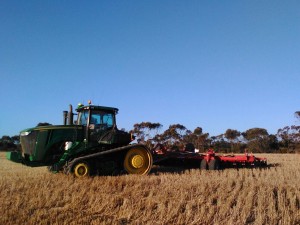 When time has allowed, Brendan has made a start on clearing Folly pond.  It has suffered neglect for far too long, several trees, a lot of branches and countless leaves have fallen into it, the water has been too shaded and has become almost stagnant.  Folly pond was formed many years ago as a clay pit, where clay was dug to provide bricks for building many of the local houses and barns.  Being clay it holds water well, and will hopefully be a little oasis of water loving plants and animals after a year or two.  Our aim is to clear back some of the overgrowth to allow sunlight to reach the water, and to allow a healthy undergrowth to develop at ground level which in turn should encourage some wildlife and eventually clean up the water.  We may have to do some careful dredging to help with this. 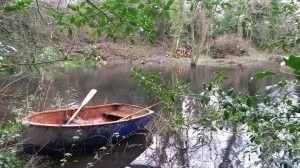 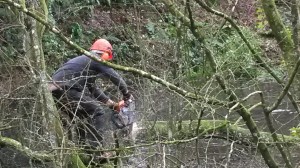 It is quite tricky cutting trees over water, so we have been cutting them at the bank, then rowing out in our little jolly-boat to tie on a rope so that we can haul the branches in by hand.  It is quite slow and laborious, but hard work is already reaping results.