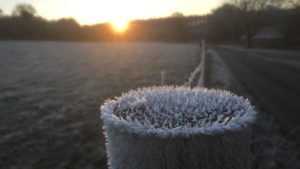 At last some real winter weather, but, oh, where did it go?  Today we are back to an utterly useless 12 degrees, and tedious dampness.  To solve some of the problems we have in the fields with difficult weeds and persistent insects, we need a good 10 days of sub minus 5 to sort them out.   Don’t get me wrong,  last week was beautiful, crisp frost and lovely sunny days, but please could we have a bit more?  The cold weather also means we can get the grain in store down to sensible temperatures, which discourage insect attack and mould formation.  Blowing ambient air through the heaps is the only way to do this, and cold weather is essential.  The irony is that, although we have solar panels on the roof of the grain store, which means cheaper electricity in the daytime, the real cold is of course at night.

Like many walks of life, farming is very susceptible to fashion, I don’t mean wellies and boiler suits in fancy colours, but in terms of the latest fads, techniques and machines, that the right-on farmer just must be seen to be using.  Top of the list this season is cover crops.  The current idea is that it is no longer a good thing to leave bare stubbles over winter, because unused nitrogen remaining in the soil after the wasteful previous crop has been harvested might be leached into ground-water by winter rainfall.  If you sow a cover crop straight after harvest, it will soak up any spare nitrogen, and grow vigorously through the autumn, storing the nutrient in an un-leachable form.  At the end of the winter we kill off the cover crop before establishing next season’s spring crop, the cover dies then off, and slowly supplies the new crop with nutrient as it decomposes.  There are numerous different types of crop we can use for this purpose, and as we at Travellers Rest are suckers like all the rest, back in August we sowed two experimental 5ha patches with a mixture of fodder radish and phacelia.  Both have grown vigorously in the very mild (until last week) autumn, and now we turn our minds to how we are going to make a satisfactory seedbed next March. 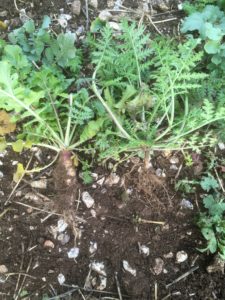 Fodder radish with its strong tap root on the left, and the more fibrous root of phacelia on the right.

An additional benefit of the presence of strongly rooting plants in the soil over winter is that they can break up hard patches and generally improve its physical qualities.

To reinforce the fashionable element of this movement (which is what it seems to feel like) there have been numerous meetings and conferences in recent weeks promoting cover crops and soil management.  We have been subjected to a number of experts in the field waxing lyrical over the interaction between physical chemical and biological properties of the soil, it took me right back to my soil science lectures from the 1980s.  This is a serious business, in spite of the hint of a frivolous tone, it is for all of us to nurture and enhance our soils.  The top 6 inches of the productive soils of the planet are what lies between life as we know it, and oblivion.  It has troubled me for many years, since we began continuous arable farming here on all the land that can be cultivated, that we may not be returning enough organic material to the soil in exchange for the crops we remove.  It is simply not economic to keep the huge livestock numbers that would be required to produce enough manure for this farm.  We buy in various manures which go some way to cover this, but probably not enough.  Some farms chop and incorporate their straw, rather than sell it, but the straw trade in these parts is generally too lively to resist.  Others supply straw to livestock farming neighbours in return for the muck, a great arrangement if you can find one.  I am hoping that in the world of cover crops there is a magic formula which can build organic matter in the soil as well as provide the other benefits, and that before too long we will stumble upon it.

To give the experiment a little scientific rigour, last week I spent a few hours with a fork, digging random holes, trying to see if the soil in different places is in better or worse condition, and how many worms it supports when growing a cover crop, oilseed rape, winter wheat, or bare stubble.  I was unable to come to any concrete conclusions, but was reassured to find that under the stubbles, as well as the growing crops, there were plenty of sleepy worms, digging holes through the soil profile, drawing organic matter from the surface down through the soil, and building their remarkable little thatched stone houses over the entrances to their burrows, on the surface. 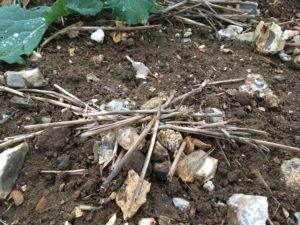 It is quite fun trying to follow their holes down through the soil, finding a semi rotted leaf several inches down, and at the bottom a worm rolled up in a hibernatory ball.  It is also interesting to see who else is curled up for the winter, such as this millipede. 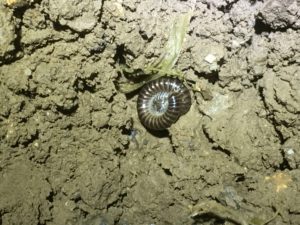 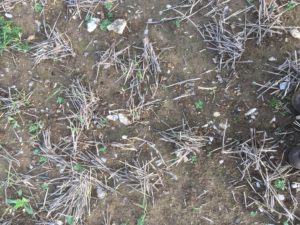 Worm houses, approximately 12 per square metre in this field

Cover crops that we grow for other reasons, such as bird food, are still standing well and are holding a huge amount of grain to keep the birdlife well supplied through the winter, mainly millet, but also barley and linseed supply grains of different sizes to suit different species.  A series of bird surveys over the past year by a local expert has revealed a wide variety of birdlife on the farm, his report differentiates between migratory species, who might come here to feed in the winter, or to breed in summer, such as the swallow, and those who live here all year round, the report is a fascinating read.  It summarises 56 species found on the farm during breeding season, and 77 in total. 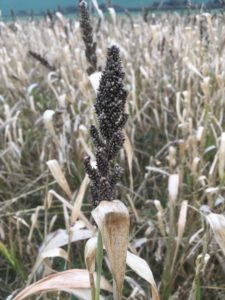 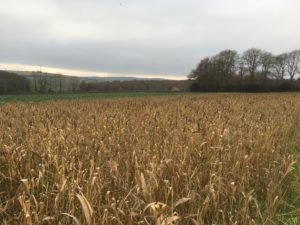 His estimate of 50 species breeding on the farm is a testament to the mixed habitat we are blessed with, and high numbers of pairs of hedgerow nesting priority species such as yellowhammer, song thrush and linnet show that hedgerow management is conducive to their needs. 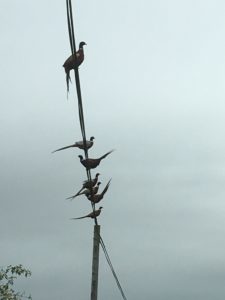 Geoff and Paul from Smart Ag Services have been back to finish off the winter service on the combine, when they had finished there was quite a pile of worn out or broken parts that will have to be heaved onto the scrap heap.  It was very irritating to find that the slats attached to the worn out chains of the feeder house elevator, which could easily be removed and bolted onto new chains, have to be purchased as part of a complete unit, adding several hundred pounds to the already frightening price.  It’s a bit like saying that because your car tyres are worn out, you will have to buy new wheels as well. 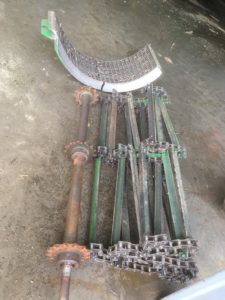 This little pile of worn out parts cost £2300 to replace

In the middle of November Durweston School visited Four Acre wood, one class at a time, for a session with Becky, a Forest Schools specialist teacher.  The activities they undertook included making clay hedgehogs, cooking over a fire, building shelters, and generally exploring the great outdoors.  The teachers and children all said what fun they had had, and are hoping to repeat the exercise next year.  They were very lucky with the weather,  the smaller children were ferried up to the wood in our farm tour trailer, which added to the fun.  A visit to the wood afterwards found some evidence of some of the activities, all of which will gradually disappear as they weather and fall down. 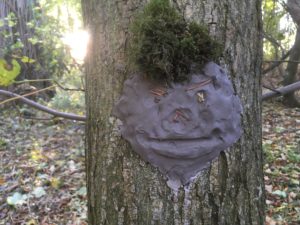 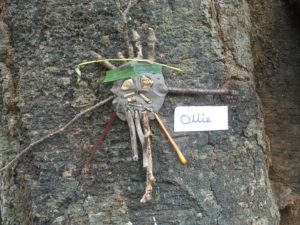 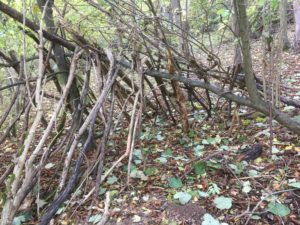 Four acre wood is available to schools and interest groups to use for similar activities.  Please get in touch via the website if interested.