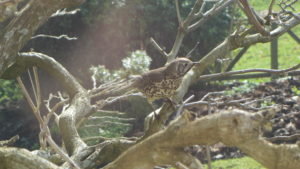 This gorgeous song thrush spent several days building a very comfortable nest within easy sight of our bathroom window, and then has sat tight for a good 10 days since.  Yesterday she was suddenly not there any more, leaving a solitary pale blue egg with faint spots behind.  We can’t decide if she has met with some catastrophe, (our cat is too fat to manage such a heinous crime), is in search of a mate, or has got bored and started to build another nest elsewhere.  If you look closely you can see that her feet and beak are very dirty, she had been pulling straw from freshly spread garden muck to help with her nest construction.  Luckily the nest is mostly lined with soft moss.  She is much more handsome and interesting to watch than the fat pigeons that usually nest in the same area, and we hope she will return very soon.

Calving continued busily until about a week ago, now we are into a long gap before we expect to see any more births.  Readers may recall from last autumn that pregnancy testing showed up that we should expect a long drawn out calving period due to the trouble we had with our bulls last year. 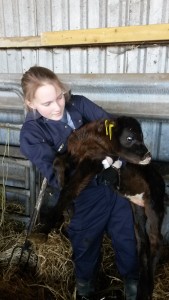 One little calf was born who seems to defy all logic.  Our friendly local vet marked the mother down as 14 weeks pregnant on the day of testing, which translated into a late May birth, our records show that the mother ( an attractive ginger heifer) was attended by the AI man in September, which tallies with the Vet’s estimate, and yet a healthy bouncy, if small, calf was born at the end of March, two whole months early.  He was healthy and keen to drink, and his mother had milk ready for him, none of which is likely with most premature births, I would not expect a calf born that early to be fully developed or able to survive at all.  We are still mystified, but he remains happy and is growing well. 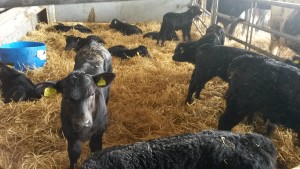 Here are all the calves waiting patiently while their mums have their TB test one Saturday morning in March.  Luckily this time they were all clear, although we are unsure whether this means we are completely TB free yet, after we had one poor cow tested as inconclusive for two tests in a row back in the autumn.  This means that she had to be destroyed, and the rest of the herd tested again, even though she had been kept isolated from any other animals for the 60 days between tests.  The bureaucracy governing all this is an utter nightmare, and in parts seems to defy common sense. 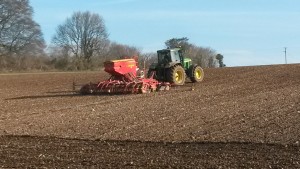 We managed to get all of our spring crops sown into lovely seedbeds before the end of March, that 2 week dry period was just the ticket, and now the barley is emerging in its neat green rows.  The poppies are somewhat slower, just a few tiny purple leaves are showing right now, within a couple of weeks I hope that the fields will have a strong green tinge.  The earliest part of crop emergence is the most nerve wracking, you wonder if anything will come up at all, and then once it appears, being so tiny and vulnerable, it feels like anything could devour the whole crop in no time, a random frost or a crowd of greedy birds or insects.  Fingers are crossed, and bangers may need to be deployed.

The muck spreading men were very efficient this year, many tonnes of chicken manure were spread in pretty quick time, followed by cultivation, sowing and rolling.  The manure gives the crops a great start, a benefit I like to think lasts for the whole season, well worth the effort and the smell.  So much more effective than something that comes out of a bag.  Here are the muck spreading team in action: 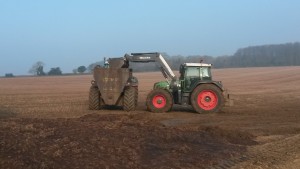 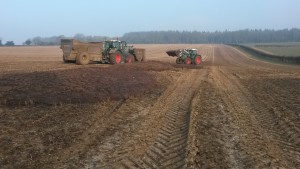 Whenever one is using machinery, there is always the chance of breakdowns, and sure enough, we had to spend several hours repairing our Knight cultivator when it should have been working in the field.  It has press rolls on the back which are attached to the main frame with large bearings.  The bearings have to withstand pretty rough treatment, being dragged up and down fields all day behind 230 horsepower, being repeatedly wacked by flying flints and a constant stream of flying soil.  It is no wonder that occasionally they give up the ghost, luckily Gary is always on the ball and quick to notice trouble, so back he comes to the workshop, and the heavy work begins.  Hammers, chisels, oxy-propane heating kit, angle grinder and large socket spanners, not to mention the forklift and some lifting straps, are all called into action to turn the job around as quickly as possible, so we can get back to the field while the weather holds.  There is a certain knack to removing rusty old bearings, and reassembly is always easier if there are at least 3 people available. 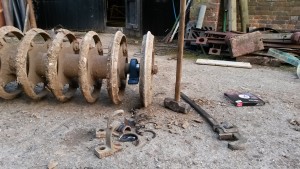 As the winter crops slowly wake up after the winter, they need a few doses of fertilizer and a splash of fungicide and weedkiller if they are going to give of their best, so the sprayer has been busy, and the fertilizer spreader has been spreading MOP (potash) fert on the fields which the GPS guided soil tests we had done in the autumn tell us need it. 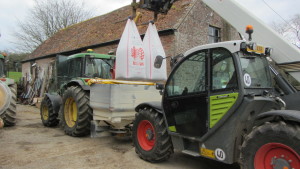 The tractor may be 20 years old, but it is still reliable, and capable of carrying the GPS kit which controls how much fert to apply in each part of the field.  The yellow beacon on the top of the cab is the GPS receiver, and at any one time may be talking to a dozen or more satellites in order to plot an accurate position for the tractor.  Attached to the tractor between it and the spreader is a crane, which can be used to lift ferti bags into the spreader, although in this picture you can see the Claas handler is being used, it is quicker and easier than the crane, which requires a lot more jumping in and out of the tractor, to line up the bags and hook the loops onto the crane hook.  It can only lift 2 at a time, whereas the handler can lift 4.