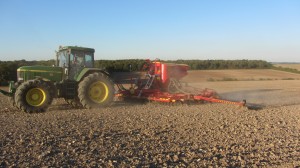 Having finished harvest on Friday 4th September in glorious weather, we paused for a short breather, watched some more rain, and then once the soil was dry enough we got stuck into sowing the rest of our autumn sown crops.  Approximately two thirds of the farm is sown to winter wheat, winter barley and oilseed rape.  The idea is to get these crops well established before winter, then they sit quietly through the cold weather, waiting for spring to come when they can steal an early start on spring sown crops as the soils warm up.  The lovely weather for the last week of September meant that we could steam ahead day after day.  All our seedbeds were semi prepared from work done straight after harvest, this allows weeds to grow in a stale seedbed, which we then spray off with a light dose of broad spectrum weedkiller before sowing into a clean seedbed where the new crop should not face too much competition.  Our 6 metre Vaderstad drilling outfit, as seen in the picture above, flies along behind our trusty 15 year old JD 7810 tractor, and although the dust was flying by the end, there was plenty of moisture in the soil beneath, and germination has been swift, many acres are now sprouting green shoots. 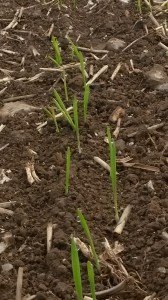 Sowing up to 100 acres per day, we were all done by Friday 2nd October, with just over 700 acres sown.  We have had to spread a few slug pellets in wheat crops following last years oilseeds, tell-tale grazing has been quite easy to spot, left unchecked, slugs can wipe out the emerging leaves quickly, leaving embarrassing gaps in the fields.  The chemical most commonly used in slug pellets is under threat of removal from the permitted list, because where historically it has been overused, and then followed by torrential rain, in some parts of the country it has found its way into water supplies, and is very expensive to remove.  Consequently farmers are now heavily restricted in the amounts allowed, and in the timings of application.

In a follow-up to my comments on neonicotinoid seed dressings to control flea beetle last month, I have been directed to some interesting papers reporting scientific work done on their effects on bees, I have also discovered that there is a large research project being conducted in the midlands this year, which will be reporting in the new year, which I hope very much will shed more light on this subject. 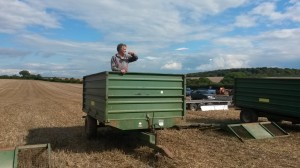 A bit of light relief was on hand during the lull before we started autumn sowing, in the shape of a couple of farm sales. The first of these was on the occasion of a neighbour retiring from farming, he had farmed his land for many years, and his father before him, as a tenant on a well known local estate, and had amassed a very interesting collection of machinery, fixtures and fittings, as well as the usual junk.  A farm sale generally follows a long established format, the items for sale are all numbered up and listed in the catalogue, these days available online beforehand, as well as in printed form, so potential buyers can do their research, decide what they are after and what limit they should set themselves.  On the day, farmers descend in their hundreds, like vultures, looking to pick over the bones of the farm.  Once the bell rings and the sale begins, the crowd swarms to the first row of assembled miscellany, the cheapest lots are usually sold first, and through the morning the tension builds, with a gradual crescendo towards the headlining lots at the end.  There are always some surprises, and some disappointments.  Everyone who bids has their own style of showing their interest to the auctioneer, and it is always fun trying to spot who is actually bidding, with a nod, a wink, or a flick of a catalogue.  We managed to purchase a couple of lots ourselves, items with specific jobs destined for them, a trailer and a set of mounted discs. 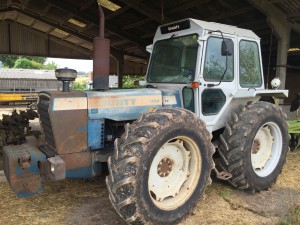 The star sale of the day was a 35 year old County 1184 four wheel drive tractor, which gradually climbed to an amazing £27,000.  There were clearly at least two very keen collectors battling it out.  I had thought it would have made a fine addition to our tractor lineup, but my limit was way out, less than a quarter of the final price. 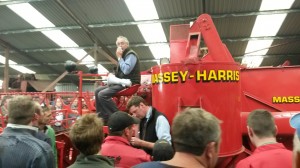 The following day there was a dispersal sale, near Blandford, of a spectacular collection of International Harvester, mostly american built tractors combines and balers, along with a few other interesting items.  There was a huge crowd in attendance and bidding was brisk.  It seemed a shame to break up such a fine collection as this, but the owner had decided the time to sell had come, it is hard work keeping such a collection in good running condition, and they would all find their way to new loving owners. 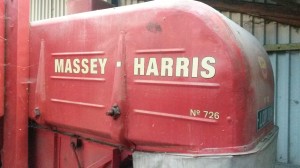 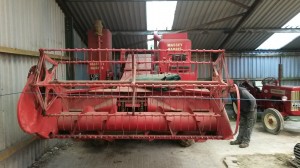 In a burst of emotional reminiscence I laid a few careless bids on an old combine, similar to one we had here when I was a boy, but fortunately sense prevailed, I dropped out before it was too late.  Where would I keep it, and where would I find the time to run it up during harvest?   It was a Massey Harris 726, an iconic design with unmistakable visual profile, which was continued with the 780, a larger model which followed, which was the same as the one we had here for a few years, and was driven by Charlie Damen and Den Corry.  I found some lovely video of three preserved models working in 2012, and have put the link on the video clips page. here

These combines suffered from a rather hazardous design fault, the engine, a petrol/TVO 6 cylinder Chrysler or Austin, resides underneath the combine, where dust and chaff always collects, and all too often would catch fire.  The driver would need a well tuned sense of smell, and at the first hint of smoke would have to leap off with a fire extinguisher before the whole field caught alight.  This happened once here, but we managed to save the machine and the field, so it was a big relief when we sold the combine on before it got burnt up.  These days every farm has a leaf blower, and if you’d had one in those days you would get off every hour and use it to clean off the engine.  Fortunately modern combines all have their engines on top near the back, and the airflow is designed so that the engine is constantly blasted with cooling air, which also keeps it clean. 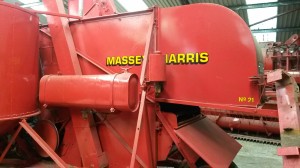 One of the most exciting lots was another combine, older and somewhat rarer than the 726, a Massey Harris 21, one of only 5 working examples still remaining in the country.  It had taken part in a reunion this summer, with three of the other four.  It is in fully restored condition, and attracted fierce bidding, finally being knocked down for £9,600.  I understand that in the early days of my family farming here, our neighbour Mr Gifford at one point had 3 Massey Harris 21s, two which generally worked together, and the third was kept as a spare, I am still unsure whether this meant ‘for spares’, or as a third machine to bring out to the field if one of the others broke down. 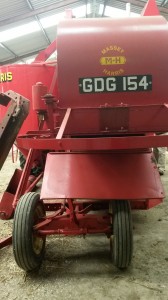 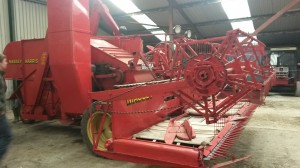 Here are a couple of pictures from the mid 1960s showing our old 780 combine, the first shows Charlie Damen complete with pipe in mouth, followed by Father on a Claas Matador, the Roadless tractor was nearly new, and the registration number points to it being new in 1965, the enthusiastic youngster running alongside could be the author.  The second shows Den Corry talking to the boss. 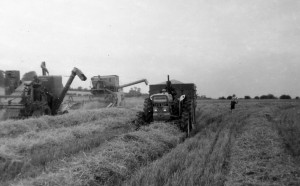 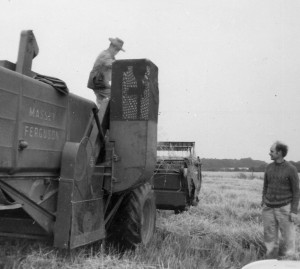 The most important ingredient of any farm sale is of course the butty van.  From the outside it might seem to be a sensible precaution to leave one’s wallet at home when having a day out at auctions like this, in order to avoid the risk of getting drawn into unwise and competitive bidding wars.  However this would be a disaster.  It is biologically impossible for a farmer to walk past a butty van without stopping for a bacon roll and a polystyrene cup of weak tea.  Twice if it’s a long sale. The butty van will usually offer a range of attractions, such as floppy burgers with all the delicious extras, like onions, and those strange squares of yellow plastic pretending to be cheese, but which add an extra intrigue to the burger experience.  However the bacon roll is the original staple food of the auction goer. 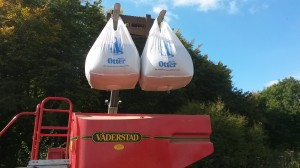 Since 2001, the majority of our winter barley has been a variety called Maris Otter, it was bred by Dr Bell in Cambridge, and first came on the market in 1965.  Uniquely amongst barley varieties, Maris Otter still remains in strong demand as it celebrates its 50th year.  The owner of the variety, Robin Appel Ltd, based near Southampton, also owns the Warminster Maltings, one of the few remaining floor maltings in the country.  A floor maltings converts barley grain into malt fit for beer brewing 10 tons at a time, whereas a modern stainless steel malting vessel might process 300 tons at a time, although not in such a traditional olde worlde fashion.  Otter malt is a premium product sought after by many UK craft and micro brewers, and is also exported to a number of overseas destinations.  Otter’s popularity is due to its unique characteristics, particularly flavour, and reliability in the brew.  It has a low yield but commands a premium price to compensate for this.  Many well known real ale brewers always use Maris Otter malt in their beers, eg St Austell, and Flack Manor brewery. 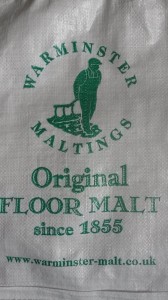 Last week all growers of Maris Otter were invited to the Maltings in Warminster to celebrate this remarkable milestone, we were treated to a tour of the maltings, a slap up lunch complete with suitable recommended beers to accompany each course, and prize-giving for the best growers of the year. 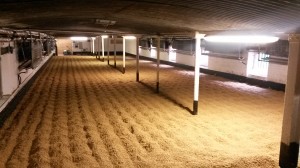 The malting process is always fascinating, the attention to detail and quality control is second to none, and a great deal of manual effort is expended in achieving a top quality product.  The barley is steeped in water for 3 days, then when at the correct moisture, is spread on the malting floor for 4 or 5 days.  In this time it is turned and ploughed numerous times, to encourage even germination, during which time enzymes convert the starch of the inside of the grain into sugar. 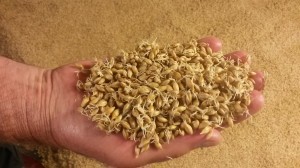 At the point where all starch has been converted, the grains with their tiny roots on are taken to a kiln, where they are dried rapidly, and then bagged and readied for sale.  If you chew on a grain at this stage, you find it has a crunchy texture and a sweet malty taste, from maltose, which is what the yeast will feed on in the brew, to produce alcohol. 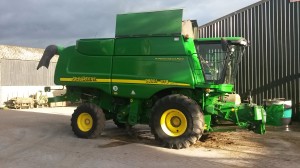 Lucky Brendan has spent the last few days power hosing and scrubbing the combine, it is a tedious job, but the machine now looks a treat, and after a run up to make sure all its constituent parts are still working, it has been tucked away for the winter.  The header has also been cleaned, and spray-painted, to protect the shiny metal bits from rust until next harvest, when it will get all worn off again.