November; generally not a month many people look forward to with much excitement.   Once the fireworks have been let off, people start to focus on the next festival, and embark on the annual spendathon, which once was a celebration of the birth of a well known religious figure, and now uncompromisingly worships at the feet of Mammon.  (money, wealth and material possessions).

However on the farm during October and early November this year, due to the extended period of mild weather, we celebrate the continuing growth of our crops, and of the grass, which means our animals can remain outside a while longer, delaying housing and preserving our supply of winter fodder. Admittedly the heavy rain in recent days has been a bit annoying, we still have a bit of spraying to do, and when the ground is as wet as it is, we are restricted to what we can do outdoors.  If lorries turn up for grain we can’t load them if it is raining hard, we don’t want the grain to get wet, and our sheds aren’t big enough to load indoors.  It is even worse for the poor drivers if they are delivering to ships at the dockside at Southampton, Poole or Portland, where some of our grain has gone recently.   At the slightest hint of rain the Skipper orders the hold to be closed, and the drivers have to sit it out.  One wet day recently there were over 40 lorries queued up to tip at Southampton.  At least at Southampton there are silos that can be tipped into when wet, but at Poole and Portland the lorries tip into an open hopper on the quay and an elevator sends the grain straight across into the ship’s hold. 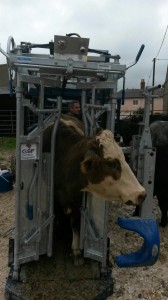 A visit from our Vet last week was a little nerve wracking, we had had a bit of trouble with our bulls during late summer, and not as many cows were served as early as had been planned.  The visit was to pregnancy test the cows.  In desperation in September we had to resort to AI (artificial insemination) for 16 of the cows as they came bulling, fortunately the news from the rear end of the crush, from where the Vet makes his inspection with a long rubber glove, was better than we had feared.  Just 4 of the whole herd of 55 were found to be empty. 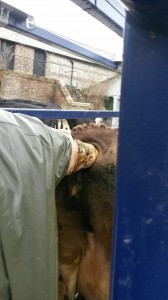 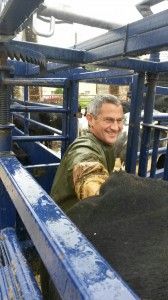 This is good news, although calving next spring will be a very long drawn out affair, with a few starting in March, but many lasting well into June.  Because of the long gestation of the cow, very similar to humans, it will take several years to pull back our calving period to the more desirable March/April period. 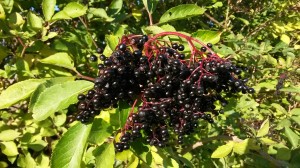 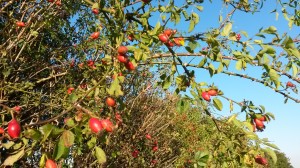 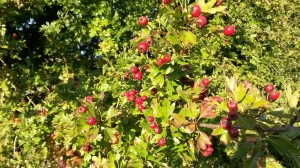 This autumn there has been a tremendous show of hedgerow fruit.  The birds’ larder is full to bursting.  There are plenty of holly berries about, although they will mysteriously have all been eaten before Christmas.  There are rosehips and hawthorn berries, the elder and blackberries have all shrivelled up by now, but there are plenty more, for example the berries below which come from the vibernum and spindle bushes, also beech mast, acorns and hazlenuts. 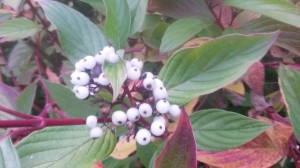 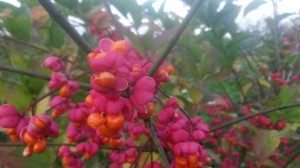 We should not forget sloe berries, from the blackthorn, always good for tarting up  cheap gin, if you have not tasted sloe gin, then find some, or even try making it.  By tradition, sloe berries should not be picked before the first frost, though in a mild year like this, a night in the freezer should suffice.  Then find a decent sized bottle, fill it about half full with sloes, after pricking them all several times, traditionally with a blackthorn thorn, then add half the weight of the sloes in sugar, and top up with gin.  Shake vigorously once daily till all the sugar is all dissolved, and then leave for a couple of months to mature.  You can then decant into an empty bottle, and drink as required! 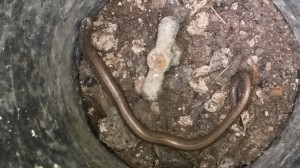 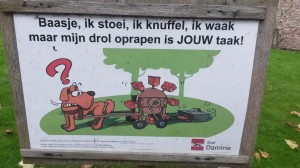