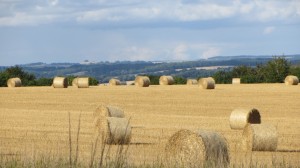 The 2014 harvest was completed here at 8.30 pm on Tuesday evening, 19th August, the earliest we have finished since 1995, and that was just one day earlier.  If the intermittent rain we have seen in the last couple of weeks had kept to itself, we could have wrapped it up a good week earlier, anyway, we finished with a flourish, hauling nearly 1000 tons of wheat back from Thornicombe in three and a half days.  The combine was flying, cutting between 35 and 40 tons per hour for hour after hour, in a good crop which was thrashing beautifully, very little chaff or unthrashed head found its way back to the grainstore. 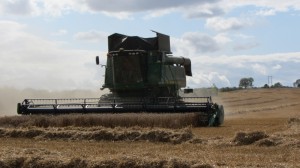 The generally fair weather has meant that the baler men have not been far behind the combine, the straw has mostly been fit enough to bale up straight away, so fields have been cleared in very good time, whether big square, small square, soft centre round or compact round the story has been the same.  It is always fun to haul the old New Holland small baler out of the shed for a few rounds, and this year was no exception, after a warm up in the barley a few weeks ago, baling 350 destined for workshop/garage walls in Stourpaine, the old baler performed beautifully, it was bought in 1981, for £3952, that would be more like £25,000 for a similar machine today.  It didn’t miss a single knot in 120 bales this time, but the old Browns accumulator sledge had a few problems coping with the speed the bales popped out the back, a 30 ft swath does test the ability of a machine designed for nothing bigger than a 12ft cut combine. 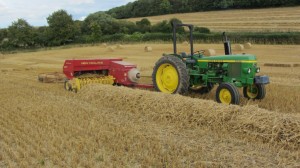 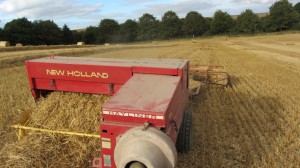 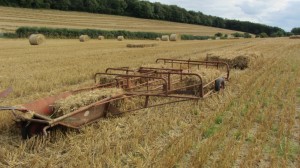 My friend in the East has a theory that the weather normally expected in the West has this year migrated to the East, and vice versa, in other words, whilst we have basked in glorious sunshine day after day, they have endured day after day of showery rain, creating havoc with the hay making and straw carting, when so often in recent years the boot has been on the other foot.  There are farmers still struggling to finish combining in Essex, which is normally unheard of by the time we have finished here.  Should we be sympathetic??

The poppy harvesting gang arrived on July 31st, a good fortnight earlier than usual, and they romped though our crop, with one rain day’s rain break, a big area this year, we struggled to fit it in the barn, and a small heap appeared in the tractor shed for a few days before the poppy company started to take the crop away for processing. 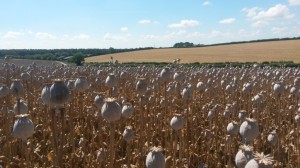 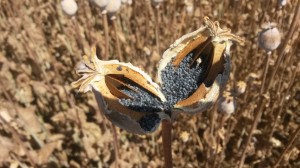 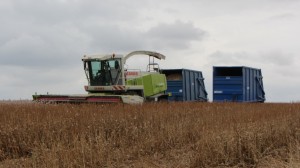 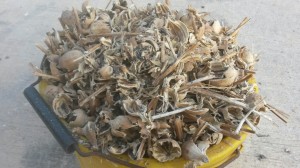 Whilst harvest has been full steam ahead, the Dorset Charcoal boys have been toiling away in our woods, they have been making good use of a number of turkey oaks that blew down in the January storms, and some thinnings we have taken out to create a better woodland environment.  They have set up their kilns in Foxwarren, and have been busy cutting, chopping, stacking and burning.  The basic idea with charcoal is that you partially burn the wood in a controlled way, this drives off the water and oils in the wood, leaving a lovely dry carbon rich product, which is easy to light, smoke free, and environmentally friendly, perfect for barbecues!  For the full story on Dorset Charcoal go to www.dorsetcharcoal.co.uk. 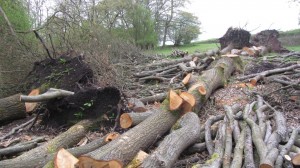 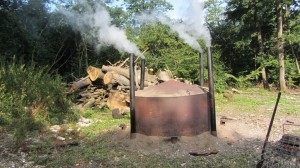 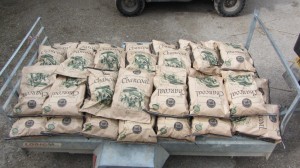 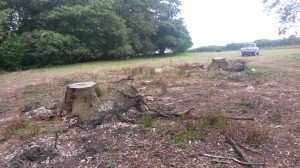 It is remarkable how the stumps have returned to the ground after the trunks were cut off.  The woodlands are a hive of activity at the moment, Ern Steel continues to cut hazel for thatching spars, as he has for the last 30 years, and we continue to harvest and process firewood for the coming winter on days when harvesting is not possible.

In the mean time, out in the fields, cultivations are already well advanced for next season’s crops, we will be sowing oilseed rape next week, and Gary has already produced some lovely seedbeds, following a good dose of chicken muck. 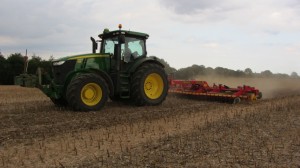 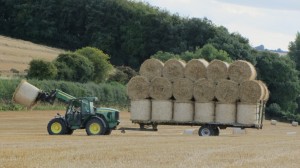 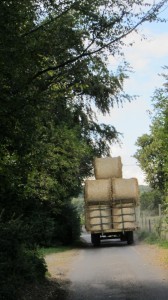