Autumn arrives early in the bird food crops, the quinoa is going through a wonderful series of colours as it ripens, from green to yellow, orange then red before ending up crispy brown, full of tasty seeds for seed eating birds to feast on over the next few months.  The hedges are packed with fruit, a smorgasbord of delights, there are plump blackberries everywhere, rosehips, hawthorn berries, not to mention apples and a fantastic crop of raspberries in the garden. 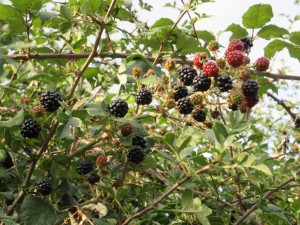 Once again I am greatly saddened to see that on too many farms, tidiness takes preference over feeding the birds, and loads of hedge fruit has been smashed to smithereens by hedge trimmers keen to tidy up hedges before the soils wet up for the autumn. 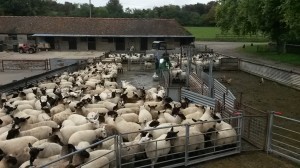 The sheep flock was rounded up a couple of weeks ago so we could wean the lambs, and dose them all with wormer and fly repellent, to prevent autumn fly strike.  The ewes have been checked over, and several older ones no longer up to rearing lambs were taken to Salisbury market today, this is what we call culling, in order to make way for some of our own reared youngsters to join the lambing flock.  Next week we will have to endure the lottery of a TB test, our second since we had a reactor back in the summer.  Since then we have been shut down, with no animals allowed onto or off the holding until we have passed two more tests at 60 day intervals with no further reactors.  Fingers are being crossed, because we will need to sell the handsome beasts off the meadows before long, the grass is running out.  The TB test is notoriously unreliable, but cannot be argued with, any reactors will be shot, with no appeals.  I apologise for going over this again, but very many farmers have been trapped in the TB cycle for years at a time, an unimaginable burden, and yet no serious attempt is made to deal with the source of the problem, sick badgers.  Their latrines litter the fields, so it is no wonder that cattle pick up disease from them. 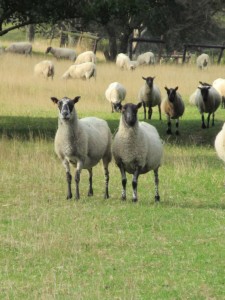 The badger culling trials are a complete joke, 70% of how many are to be culled??  No one knows how many were there in the first place.  It is all a sick political compromise.  The answer is quite simple but nobody has the guts to do it:  The badger originally gained protected status when its numbers were threatened by illegal and cruel baiting and hunting, and after 30 years we now have a badger epidemic.  If protected status were removed, land managers could root out diseased families of badgers, and encourage a clean and healthy population, which would then not cost millions every year in fruitless controls on cattle, which keep getting reinfected.  Vaccination, I hear you yell, blimey, how much will that cost?

The arable fields are all waiting for the autumn corn sowing campaign, but we are waiting for a good flush of weeds to spray off before we can begin, how long will we have to wait, the soil is very dry, but who dares to wish for the weather to change? 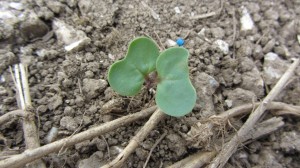 The rape was all sown in the first few days of the month, and in spite of the dry soils, is coming up well, we are having to keep a very close eye on it in case of an attack by flea beetle.  You may have heard in the press that a family of pesticides called the neonicotinoids has recently been banned from use because of concerns that they are causing damage to bees.  For a number of years we have been using one of these insecticides as a seed dressing on the oilseed rape, to great effect, it means that we have rarely had to spray our emerging rape crops with a pyrethroid insecticide.  With such a seed treatment the control is achieved by the chemical inside the plant when chewed by the flea beetle.  I struggle to understand how there can be enough chemical still in the plant, greatly diluted by the plant having grown to 2 or 3 feet in height by the time it flowers and the bees start feeding, six months later, to harm them.  However there is some hotly debated evidence which points towards just this, so the EU has taken the precautionary step of a ban, whilst further research is undertaken.  In the meantime, more spraying will have to be done, in some parts of the country whole rape crops have been destroyed by the pest in spite of widespread spraying.  There are fears of resistance to the spray in some areas, then what do we do? 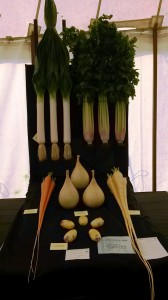 A visit to the National Vegetable Competition at the Dorset County Show revealed some spectacular entries, I was pondering how you grow carrots, parsnips and leeks to as much as 3 feet long, I think some very dodgy methods must come into play!  Someone obviously knows their onions….. 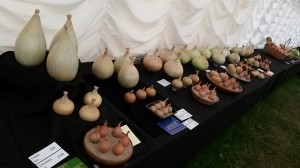 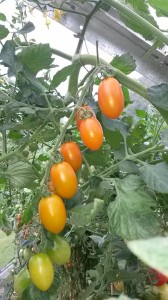 In what is turning out to be a rather controversial issue this month, dare I mention the world wheat market?

Over the last six months, the price of wheat has lost about a third of its value.  To put this in context, the value of the wheat in a loaf has fallen from about 8p to nearer 5p,  I wonder if this will be seen in the shops.  Bumper harvests in many regions of the world have led to full stores and a greatly depressed market.  The French have had a poor quality harvest and are pouring their sub-standard wheat onto the market to make way for maize in their co-operative stores, and this is pushing the price down hard. UK farmers have been reluctant to sell since harvest, but are going to have to face it sooner or later, it is no fun confronting a falling market already at a 4 year low. 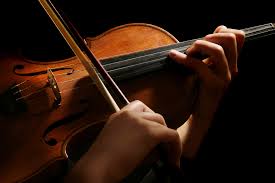 If you would like to see less, or more, of a controversial nature in this column, please feel free to comment to the editor, or the comments section of the website! 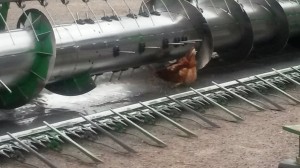 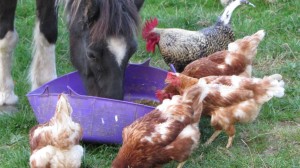