As the sun sets on 2013 it could be a time for reflection, or else we could just get on with life and enjoy the dry ground underfoot in one of the drier autumns of recent years.  Let’s be honest, since May this has been a cracking year for most of us, a lovely warm summer without a sweltering drought, one of the easiest harvests with lovely clean plump grain, and a very kind autumn for establishing the new season’s crops.  As we all know now, it only fell apart this weekend.  (Writing on dec 16th) Our rain gauge has had the dust well washed away since last Friday, we have collected 69mm over the three days, with more forecast for tonight and Wednesday, this morning it looked like this. 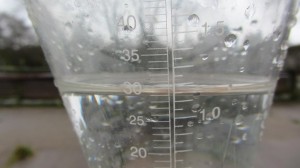 [Update on Thursday, we are now up to near 120mm since last Friday]

Because of all the rain, we have exercised the precautionary principle and moved the ewes off the meadows up to higher ground, they won’t be back before April now, there’s not much grass left anyway. 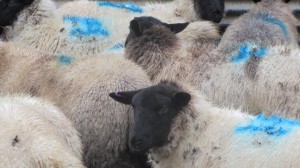 The lambs have been moved from grass onto turnips today, where they will spend the winter, and hopefully continue to grow.  They have had a walk through the footbath on the way to sort out the odd lame one.

The cows have been indoors for the last few weeks on a delicious diet of silage and more silage, and the bulls now have access to shelter in a yard, with their own supply of silage. 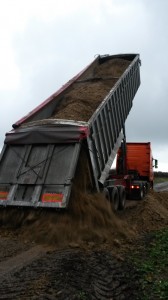 The sudden arrival of rain has unfortunately coincided with the arrival of a number of large lorry loads of chicken manure.  We have had to find a safe place to store this, which is difficult if the ground is too wet.  The best place would be in the fields where it will be spread in Feb or March, but too bad, we can’t get it there now because it’s so wet, so have piled it up on a hard standing, where it will be sheeted to keep from soaking up too much rain. 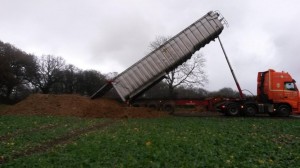 The horses who live here during the winter have been fitted up with smart new shoes today, the farrier visited the morning, his visits always attract a crowd of hens looking for hoof shreddings, and the dog who is always on the lookout for something tasty to chew on. 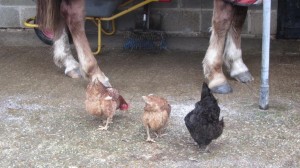 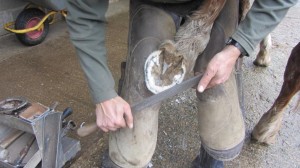 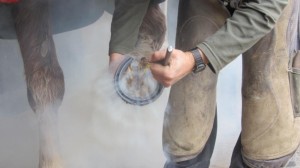 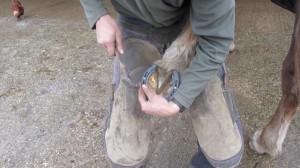 The farmyard has been the scene of a quiet revolution over the last couple of months.  Regular readers will recall the story of Silver the cockerel, who managed to overthrow his old Nemesis Copper as cock of the roost.  Well it is alarming how quickly the younger generation think they can take over, because poor old Silver is now the downtrodden underling, and his son, who we could call Cocky Young Devil, has managed to pinch all his Dad’s birds, and the old fellow wanders around for most of the day with one hen for company if he’s lucky. 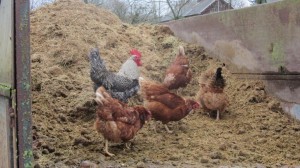 The cocky young devil with his new friends. 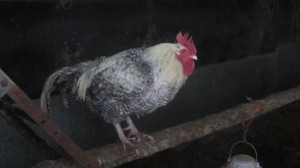 Poor old Silver, back on the perch by 3.00pm, no friends to stay outside with

There has been a flurry of grain lorries today, which meant a good wash-down was needed for the forklift after moving several tons of that chicken manure.  It was three loads of wheat today, mostly heading for feed mills or local stock farms, and we’ve been asked for a load of barley tomorrow, which will be off to a boat at Southampton, probably going to Belgium to make some of that lovely continental lager……. 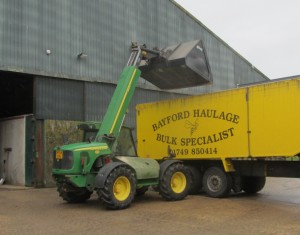