The view across to the trailway today from where I was rolling, shows cattle and sheep on the last remaining turnips in the middle distance, and the trailway snaking off towards Blandford on the right, close to France Farm.  (click pictures to enlarge) 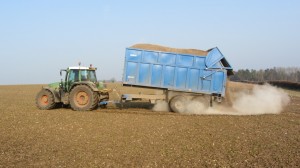 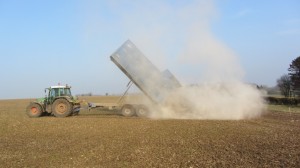 The last 10 days have seen a huge amount of activity on the farm.  Since the dry weather arrived we have had four different contractors in to spread lime, manure and compost, all has then been worked in with a cultivator, sown with barley or poppies, then rolled down tight with the rollers to push the stones in and leave a level finish.  We have also given a first dose of fertiliser to all the winter sown crops, and sprayed a pre-emergence weedkiller on all the newly sown spring barley. 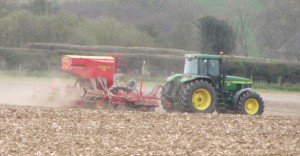 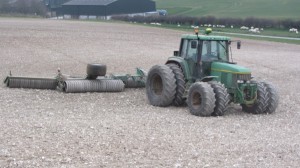 For the first time this year, we have been trying out variable rate nitrogen fertilizer application.  The theory is that you apply more nitrogen to poorer areas of crop, in the hope that it will catch up the better areas, so ending up with a more even crop by harvest.  We have chosen our most obviously variable fields to try this out on and in order to achieve this, we have to subscribe to a service which provides infra-red satellite images of our crops, which show up the greenness and plant density of the crop.  From a website we can then download appropriate fertilizer spreading maps to apply the right amount in the right place.  The spreading files are taken from the office computer to the sprayer controller on a memory stick, a colour shaded map then appears on the screen showing which areas will receive more or less fert.  As the machine proceeds across the field you can watch the pressure gauge going up and down according to what is required.  This can also be achieved with solid fert in a spreader, but we apply most our nitrogen in liquid form with the sprayer, it is more accurate and wind proof, saves on packaging, and is altogether easier. 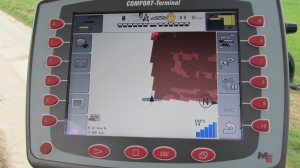 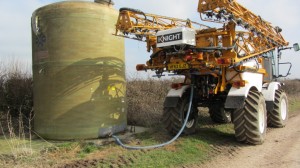 Sat nav is being used more and more on the farm, we even use it when rolling to help guide the driver. The tramlines are left as shallow grooves in the soil by the drill, but these are 36 metres apart, and the rollers are just 12.3 metres wide, which leaves little room for error.  Two bouts in every three need assistance from the sat nav, the trouble is this is not going to teach the old skills of driving by eye to the younger generation. 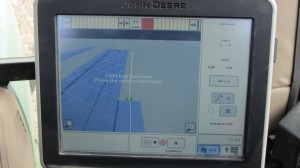 Ron Jeans showed us some wonderful pictures last month in the Durweston News, including a rare one of our old Massey 187 combine, probably being driven by Den Corry.  In fact a close look shows it is stationary, with two people standing on the back. By remarkable co-incidence, I took my own pictures of a similar one only a week or two earlier, at the combine graveyard in Shaftesbury, the most amazing thing about it, apart from being rather sad and unloved, was how small it is. 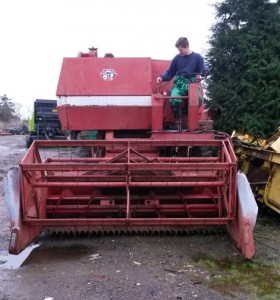 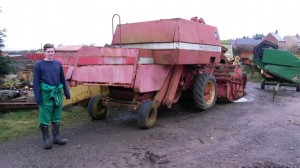 Today’s combines are huge in comparison.  Even this orange Allis Chalmers being driven by Ron’s son Roy in the 1970s was much bigger.  Funnily enough this one is being driven the wrong way round the field as well, you can tell because the spout is pointing into the crop, no good for unloading on the move.  The 187 could cut 10ft, our current John Deere cuts 30ft! 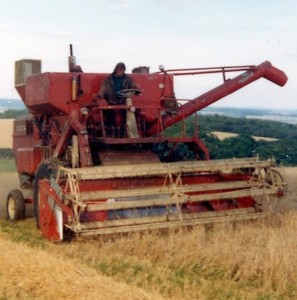 I have been in correspondence recently with Christine Poole, who was born at Travellers Rest and now lives in Canada.  She reads The Durweston News, and has sent me some wonderful pictures taken in the 40s and 50s, including this one of her father Henry Meaker, who many will remember well, standing proudly with his Field Marshall in front of our old green shed around 1950. 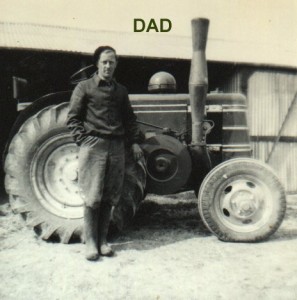 Her pictures included this classic tractor, a three-wheeled standard fordson, which was bought by my Uncle at the farm sale when the Meakers gave up the farm, and was taken to the Steam farir several times back in the 70s.  High time for a re-appearance I think. 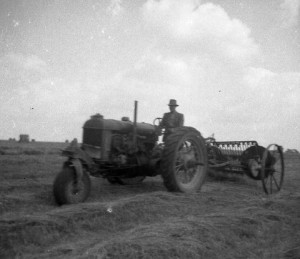 We have been experimenting this month with compost from the Hurn recycling centre, where much of the county’s recycling goes for treatment.  This compost is derived from garden and municipal waste, and seems to be pretty well decomposed, although there is too much woody material in it.  However the huge disappointment is the quantity of plastic in it, this is extremely embarrassing for us, and there is quite a mess to clear up around the fields, where the wind had blown fragments across the field into the hedges.  I apologise if any of this finds its way into anyone’s garden, we will clear up as well as we can.  There are clearly issues with this composting process that need sorting out.  We will not be doing any more if it’s like this. 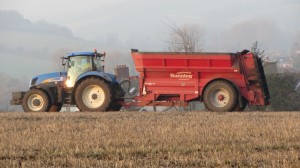 The contractors spread 700 tons in one day

On examination before spreading the tipped heaps looked pretty useful, with very little sign of the plastic, but once spread and dried out, the true situation became painfully obvious.

In theory adding decent recycled compost as a soil conditioner should be a win win all round, but absolutely no good if we are causing a pollution incident while trying to save the planet though.

Calving has progressed steadily through the month, there are about 15 cows left to calve now, we have had one set of twins, and there are now lots of happy little calves charging around the yards at Websley and Shepherds Corner. 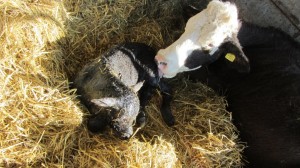 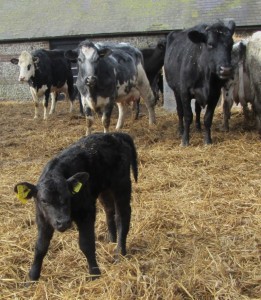 This week we had another visit from our old friend John Baily, who collects lambs, well hoggets, at this time of year, for the abbattoir at Yetminster.  He runs his experienced hand over the animals to see whether they are the right shape to go on, too fat and they are rejected and put on a diet, too thin, and it’s back to the turnips for a couple more weeks.  Our useless but very friendly former pet lamb Rocky, who got a reprieve last year, hangs back and goes through the weighing crate last, in the hope that the lorry will be full by then. 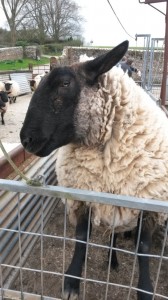 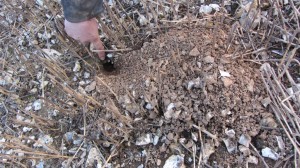 This week I found an unusual sized hole in the ground in a stubble, with a lot of spoil thrown out around it, too small for a rabbit, and completely out of the question for a badger, but who would be responsible, does a field mouse dig a hole like this, and can it throw out soil so vigorously, can anyone shed any light on this?