A fine line up of Field Marshall tractors, famous for their single cylinder diesel engines, and characteristic exhaust pipes, which together result in that unique engine sound, leading to the nickname the ‘Boom boom’.  Some may have heard ours driving through the village the other weekend on its way to and from a small working event of Steam and Starting Handle machines on Bushes road, Stourpaine, very near the site of the Original Stourpaine Bushes Steam Fair, precursor of the very popular Great Dorset Steam Fair.  There was a binder cutting wheat, a steam driven thrasher processing the sheaves, a Marshall-driven static baler, where the bale strings have to be tied by hand, and a pair of steam ploughing engines at work at the other end of the field. 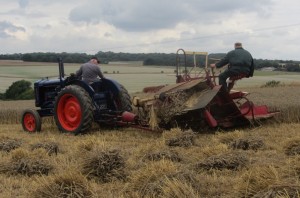 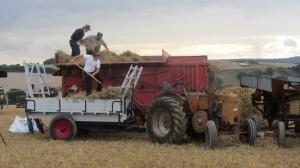 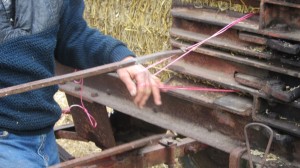 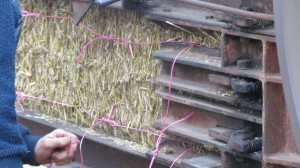 The last two pictures show the tying process on the static baler.  A pair of stout metal needles with hooks on the end are pushed through the bale to catch the twine, which is then pulled through for tying.  Before the days of poly twine they would have used wire, a bit of a pig to work with, and it had a tendency to get all twisted up into a tangle if you let it, hence the term ‘haywire’, with thanks to Phil for this titbit.  When working hard, day in day out, a gang of at least 11 men was required to run a thrashing rig, and on top of this the farmer would need his own team to bring in the sheaves and take away the straw and grain.

While the thrashing gang worked away at one end of the field,  the ploughmen were at work at the other end.  To run two ploughing engines and a plough required at least four men, and more if the ground was very hard, to make the plough go into the ground, and of course the engines would need to be kept supplied with water and coal all day. 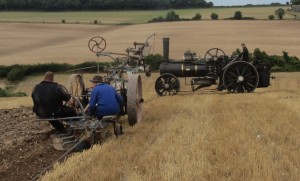 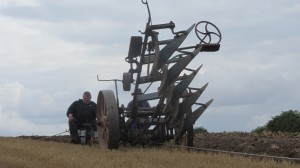 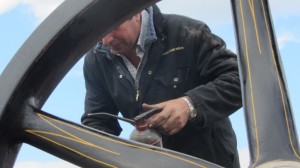 The plough is pulled back and forth across the field by a steel rope around pulleys under the engines, and the drivers communicate by giving blasts on the engine’s whistle.  Waiting for the plough to travel across the field gives plenty of time to keep the engine running sweetly, oil can and oily rag are essential tools of the trade.

Back at home, harvest is but a dim, though still gently glowing memory.  In terms of ease, it must have been the best in many years, the weather was very kind, and we were able to romp through it all within a month, unheard of in modern times.  After the latest start any of us can remember, it ended up as one of the earlier finishes.  Overall results are a bit below average, not surprising when we remember what a bad hangover we had from last year, and what a long cold wet winter and late spring we endured, followed by three months of near drought.  So all in all a good turnout.  Our attention has now turned to establishing next season’s crop, we have sown around 150 acres of wheat so far, as well as all the oilseed rape at the end of August, which is only just starting to move, having had to wait ages for some moisture to get it going.  We have had to do a few repairs along the way, as always, and you will see from the picture that our rollers have been suffering a bit lately, they clearly are not made of such good metal as those of 50 years ago, this is an issue we are taking up with the manufacturer as the machine is only 4 years old.  We have had to replace 22 rings, which at more than £50 each is no joke. 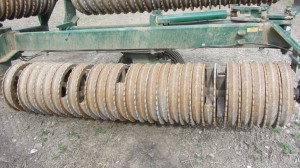 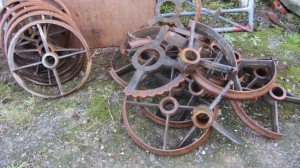 The early finish to harvest meant it was possible to make a visit to the Dorset County Show, and amongst the many attractions there, we found a striking number of different breeds of sheep, some of whom deserved a wider audience: 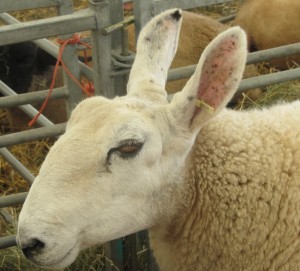 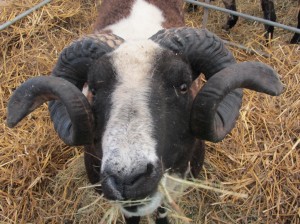 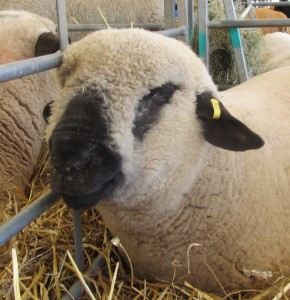 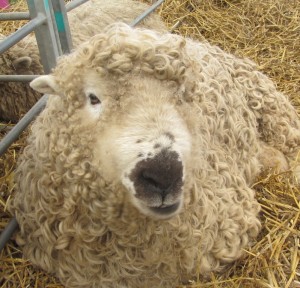 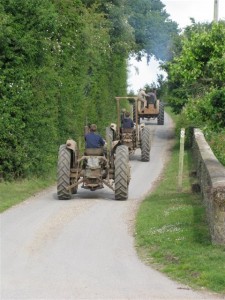