The Season of mists and mellow fruitfulness:  The hedgerows are stacked full of blackberries, rosehips, sloes, and many other fruits, there are many nuts on the hazel bushes, and acorns to sink battleships.  We have had to fence our cattle away from the oak trees in the meadows because of fears of them gorging themselves on acorns.  Our autumn sowing was all completed in double quick time, the weather has been so kind and we had no serious rain hold-ups, so we managed to finish by 2nd October, one of the earliest on record.  After last year, where we didn’t even start until 1st October, and it dragged on until well into November before we finished, we were not going to be caught napping, and have erred on the early side.  This has its downside, because the crops grow away vigorously, good in the fight against slugs, but bad for attracting disease carrying aphids while it’s still warm, and for the weeds which have also grown away vigorously. 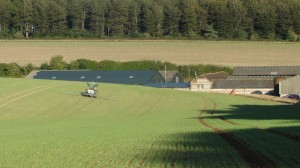 Fortunately, in many of our fields, we had already decided to use a pre-emergence weedkiller, which knocks out weeds as their shoots grow through the thin layer of chemical on the soil surface, so only a few fields have had issues weeds so far.  The autumn has also so far been fairly free of slug attack, mainly due to the lack of moisture in the soil, however here and there are developing signs of their grazing, especially in fields after oilseed rape, which generally encourages slugs the whole season long, with its shady and damp under-storey micro-climate.     A few slug pellets have been applied, and a few more are likely to be needed yet.  The most annoying areas of slug attack are alongside some of our 6 metre wide wildflower headlands, where a lot of those large fat black or brown slugs hide out, and during the night they slither out and munch away at the growing crop.

Last month we took a damp day off, and spent the day at a forestry demonstration and sales event at Longleat.  There was a remarkable collection of kit on show, much of it at work and showing what it could do.  As with many of the agricultural shows, it seems to be all about boys and their toys! 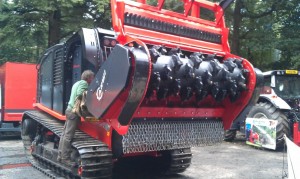 This is a mulcher to die for, it is hard to imagine that much could stand in the way of this monster machine, like something out of a James Bond film, where the hero is tied to a tree and the villain is driving one of these things towards him, flails spinning, tracks grinding forward, trees crashing down and being shredded, dust and soil filling the air, and the huge roar of a 500 horsepower diesel engine screaming at full revs… 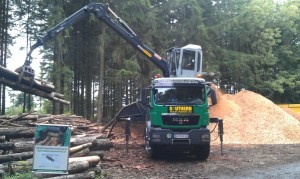 I digress; this next machine is another powered by a huge engine.  This one reduces whole grabfuls of trees to pulp, or woodchip, in seconds.  No poncing about with little petrol engine chippers here, this one is serious, and can reduce a hundred tons of trees to chip in no time at all.  All this huge and expensive kit is riding on the back of a revitalized forestry industry in theUK, due in part to the fashionable trend towards biofuels. 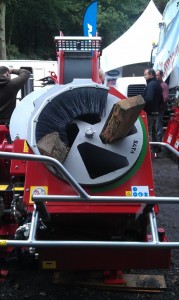 I must admit I do have a bit of a problem in seeing so much oil being needed in such machines to reduce trees to manageable sized lumps for burning.  I think we should all have to buy our own axes and get out there and cut our own fuel.   Burning wood for heat and power makes a lot of sense environmentally compared to oil, although will still cause pollution problems if too much is burnt too quickly in too small an area.  This needs to be remembered when considering the whole oil versus biofuel debate.  The reason we have controversy around so called climate change is because there are too many people, burning too much fuel of all kinds, in too short a time, on one small planet.  Nuclear is no better, because it creates a terrible amount of highly poisonous waste, as well as being staggeringly expensive.  But then, oil and gas has been far too cheap for far too long, that’s why we waste so much of it.  How stupid have things got when the government dares to suggest that people wear an extra jumper in winter, and then have to retract the comment the next day?  If people expect to be able to keep warm in cold weather without wearing extra clothes, and can afford to pay for the extra fuel, then we are all going to hell in a handcart pretty damn quick. Turn it down, do some exercise, insulate, insulate, insulate! 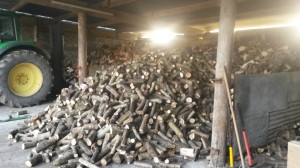 A trip to Frome market last week to see our 18 month beef animals sold was interesting.  There were over 1500 store cattle entered in the sale, these were animals varying in age from 5 months to 2 years plus, which need finishing before they are fit for the butcher’s shop or supermarket. 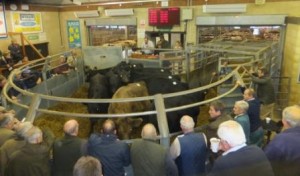 In our case the grass growth has slowed down, and we do not have enough grub for these animals as well as their younger siblings and their mothers for another winter.  However trade in general was good, reflecting the time and resources involved in producing good quality beef.  There was the odd animal with horns, which must have slipped through the de-horning net, however it was very surprising to see two penfuls of red Herefords with full sets of horns, they are surely dangerous to each other as well as to anyone working with them. 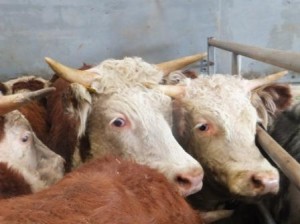 Many cattle are now bred without horns (polled), and the rest are usually de-horned as soon as the horns start growing when they are very young, and a group like this is pretty unusual. 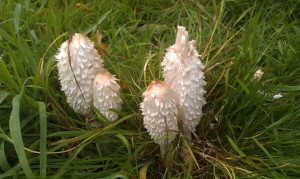