UK agriculture is running about a month behind last year at the moment, I am sure you will have noticed the slow start to the growing season.  The appalling cold weather we have seen over the last month was the last thing any of our crops needed after such a wet and prolonged winter.  A poor sowing season last autumn followed by the arctic conditions of much of April has been a bit of a double whammy.  Let us not forget, the running annual total rainfall to the end of March was, and will hopefully remain, a record at 1680mm, or 67 inches in old money.  This surpasses the previous record (March 2001) by 100mm (4 ins).  The soils have been packed down hard by all the rain of the last year, and in order for them to dry out, we need them to warm up a bit, and for the crops too grow and draw moisture upwards by transpiration.

The cold weather has seriously complicated our decision making; such as when to apply fertilizer and various sprays.  Normally we are well into the fungicide programme for the season by now, St George’s day is usually the time we give our wheats their second fungicide, whereas this year, many of our wheat crops have not yet even reached the stage needed for their first dose.  I dare say at some point they will rapidly go through the growth stages, and will catch us napping, because you can be sure that by harvest time, we will be no more than a week adrift of the norm.  We have had to tear up the calendar, which is usually a handy guide as to when to do what, and we will be adapting to the crop’s growth as we go along. We have already missed a great chunk of potential growing season by starting so late, so will be lucky if this does not affect our harvest.  However, not wishing to be a doomsayer, the most important months for building yield will as usual be May, June and July, when we need sunshine for maximum photosynthesis. 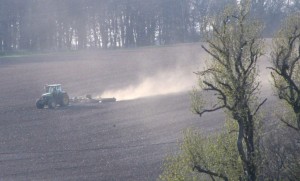 Today, at last, we managed to finish sowing our crops for the season, the final field of poppies was sown and rolled this afternoon.  Already the first sown fields have emerged, having been sown before the recent wet weather.  We have also managed to complete a significant amount of the fertilizer plan for most of our crops.

These two photographs of oilseed rape, taken on April 17th , show clearly the contrast between a vigorous variety which survived the winter well, and a poorer field, which still hasn’t managed to get going due to intensive attack by pigeons. 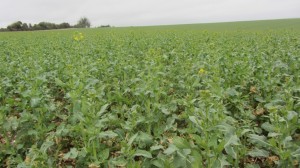 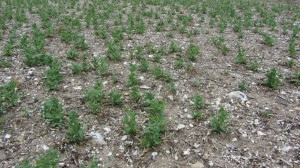 The winter wheat and barley look decidedly patchy in places, where waterlogging and slugs took their toll.  The spring barley has now emerged after sitting in cold soil for weeks, and is moving only slowly. 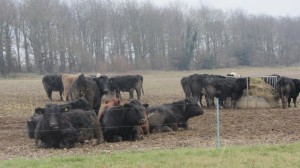 The cattle are all still indoors, we have had to buy in extra silage for them, as we ran out of our own several weeks ago, and they are going stir crazy, desperate to get back outside, however as there has been so little grass growth yet, we are not keen to let them puddle what little there is into mud.  Our second to last calf was born at the weekend, so now there is just one cow remaining to produce, and she seems to be in no hurry.  The bulls are still munching away, blissfully unaware that next month they will be expected to turn out for their annual 8 weeks hard work, all fit and raring to go. 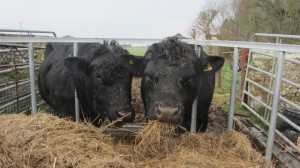 The sheep have been back on meagre pickings of grass since the turnips ran out last month, the ewes will be shorn in the next couple of weeks, and shortly after that hopefully will begin to lamb, so as usual, please could people exercise great care when walking on footpaths near sheep, especially when accompanied by dogs.

Some peculiar notices have appeared on road sides recently, erroneously informing people that shooting of badgers with high velocity bullets (!) will be occurring in the area soon, and that people should keep children, pets and themselves indoors.  This is nothing but scaremongering of the worst order.  Firstly, any badger culling that takes place as part of the government authorized culling scheme will not begin until June, and then only in Gloucestershire and Somerset. Dorset has been mentioned as a possible backup region, but there is so far no clue as to where in the county this might be even if it happens.  Secondly, if badger culling were to take place locally, it would be by trained firearms license-holders, at night, with minimal risk to the public.  A considerable amount of vermin shooting has always been undertaken at night over very many years in most country areas.  The aim of the cull is to try to get some control over the terrible disease of tuberculosis in cattle, and which is spread widely by badgers.  There is no other proven way of controlling the disease, which has been allowed to escalate to disastrous proportions since co-ordinated badger controls were abandoned more than 20 years ago.  In those days, any TB outbreak was followed by strict action by the Ministry of Agriculture to contain the outbreak by culling infected badgers.  This policy was largely effective, and only when the government lost its nerve in the face of the misguided animal rights movement, did the disease begin its tragic spread to the epic levels it exists at today.  Increasingly stringent controls have been imposed on cattle farmers over recent years, to try to reduce levels of TB, with pitifully poor results.  The bald fact is that unless steps are taken to control the disease in the wildlife, the disease will continue to spread across the country, costing millions and causing untold misery to farmers with affected animals.

Our new sprayer has been working hard over the last 10 days, and proving its worth.  With a very early start on Saturday, we covered 56ha with fertiliser, and then moved on to spray the rape and covered 142ha by shortly after nightfall.  This must be a record for the farm, just shy of 500 acres in one day for one man and his trusty machine.  Over the last 10 days we have covered 862ha (2130 ac) with fert or spray or both.  The lion’s share of nitrogen fertiliser has been applied for the season in that time, amounting to some 170,000 litres, approximately 8.5 lorry loads. 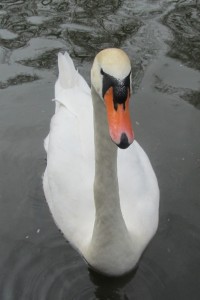 Question:  How do you know if that big white water bird is friendly, and simply after some bread, or whether he has his eye on your camera, or else that fleshy bit on the back of your arm?