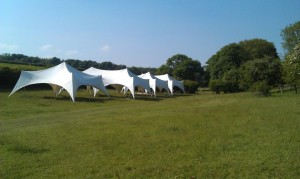 Strange sight seen in a field near Durweston, are they space ships or space savers?

The picture below was taken before the great chicken massacre of Travellers Rest, which took place in broad daylight one sunny Sunday afternoon a few weeks ago.  We now only have 4 hens remaining after the flaming fox took not just one but five hens from the paddock across the road, just opposite the house. 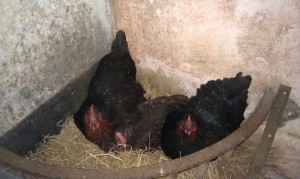 How the animal could kill all five and take them away without being seen beggars the imagination.  She left nothing but feathers.  No doubt it was a vixen with cubs to feed.  The fox trap has been deployed since, but so far without success, the fox is an intelligent and highly suspicious character.  A few days later a fox was seen running off with our cockerel Silver in its mouth, luckily he was interrupted, and Silver survived to see another day, he is now shut in with the hens, and denied the wide open spaces around the farm, probably until harvest time, when the fields will be cleared and the foxes won’t be able to sneak up so easily, hidden by the crops.

Before anyone listens too closely to that madman George Monbiot, who I heard on the radio the other day proposing the re-introduction of wolves, lynx and no doubt bears and lions to theUK, as part of his ‘re-wilding’ manifesto, they should bear in mind the trouble we get already from our native wildlife.  The endless battle between those who would wish to abandon great swathes of our small island to nature, and those who wish to actually benefit mankind by growing food and other useful things will no doubt continue until the end of time.

The UK landscape is the result of man’s activity over thousands of years, and I don’t believe it is right to try to deny the effect man can have on the natural environment around us, but to try to pretend that we can return much of our land to the wild, whilst it is inhabited by over 60 million people is plan daft.  The process of re-wilding would in the short and medium term result in a bit of a mess.  Brambles nettles and thistles would dominate to begin with, and after that a period where scrubby bush and impenetrable undergrowth would predominate until a decent population of taller trees begins to rise above the undergrowth, and then shade some of it out.  The uncontrolled squirrels and deer though, would mean that this would take a very long time, unless the wolves are introduced in such numbers that would keep the deer under control, and of course they wouldn’t attack family pets or people at all would they?  The landscape is already subject to a subtle balance between man and nature,  with so many people involved, and the power that man has to change so much so quickly, such as with road or house building, as well as farming, Mr Monbiot’s ideas are great fun to argue about, even if totally bonkers! 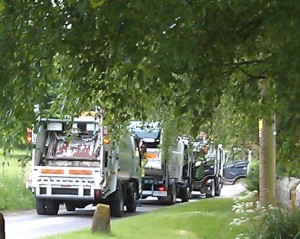 Still on environmental matters; if I hadn’t been able to laugh at the sight of 3 dustcarts and 6 men arriving to pick up three bins at Travellers Rest on the first collection day of the new regime, I think I might have had a heart attack.  I am sure the Dorset Waste Partnership will have a few teething problems getting the new system to bed down, but if, as one of the drivers told me, there are to be two lorries every time, one for the recycling/refuse, and one for the glass and foodwaste, I will be wanting to ask questions.  Out here in the sticks we don’t expect to get exactly the same service as everyone in the towns and villages, although it is already wonderful having our recycling picked up for the first time ever.  But if the savings in energy etc from supposedly more recycling being achieved is to be offset by more heavy vehicles patrolling the countryside lanes, then I would settle for continuing to take my recycling to town myself 4 or 5 times a year. 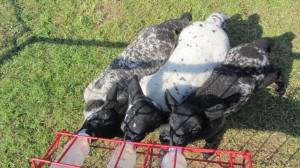 Our orphan lambs started to lose their tails this week, and when we were visited by the Seahorses class on Thursday, the children were both intrigued and revolted by what they saw!  This didn’t stop some of the girls later collecting up four tails in the paddock along the road when we went to feed toast titbits to our group of pet sheep, who have their own lambs.  There was then some animated discussion about who was going to get a tail to take home.  My apologies to those of a delicate disposition who maybe did not welcome finding a smelly lamb tail in the bottom of the school bag! 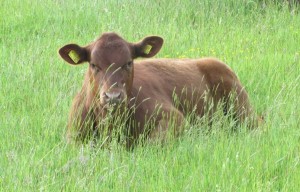 We’ve been working on a drainage project over the last few weeks, repairing the old Portman era drainage system at Shepherds Corner which had stopped working.  Whilst digging a deep hole, we finally discovered what the old boys have been telling us for years, that there was always a pond in the yard. 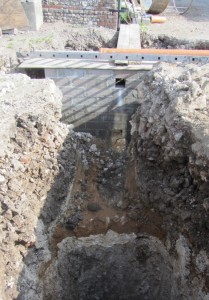 We have discovered the compacted clay lining of the pond, (see picture) sandwiched between the permeable chalk below, and the rubble above which must have been used to fill the pond in quite a number of years ago, in the 50s possibly.

We will be wild oat pulling in a couple of weeks time, we are running later than usual, as the crop season is still some way behind a normal year, and we welcome keen workers eager for outdoor work, fresh air guaranteed.

The big debate now is when will harvest begin?  We normally begin cutting winter barley by July 15th, but this looks unlikely this year unless we get a severe heatwave.  Will I have a combining picture to show next month, or will it be more cuddly animals? 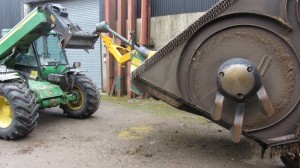 A handy handler is used for all sorts of jobs, repairing the mower in this case. 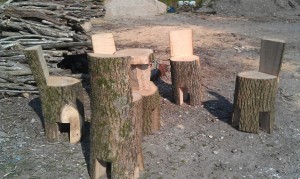 The latest range of office furniture from IKEA 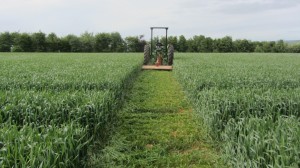 Keeping the footpaths legal until it grows again.