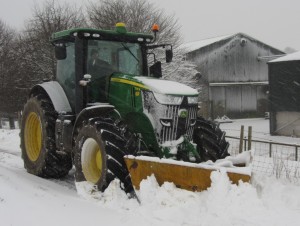 It is not often that we get enough snow to justify hitching on the snowplough.  It doesn’t scour the road very well, and can actually make the surface worse by compacting the snow into ice.  However on Friday we had 5 or 6 inches in quite a short time, and for a quick clearing of the road, the snowplough is just the ticket.

To clear just a couple of inches before it turns into ice overnight though, a scrape with the forklift bucket is better, followed ideally by a dose of council salt grit, to prevent freezing.  The timing of the snow was pretty good, being a Friday, it was easy to play safe and close schools, so people could stay at home, and an intensive tobogganing session could be enjoyed.  As the snow froze and refroze over the weekend, the sledging runs got faster, and speeds improved!

The great thing about this snow is that it sticks to everything, so it’s perfect for snowballs and snowmen, and making fences and old machinery look interesting. 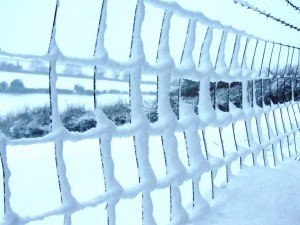 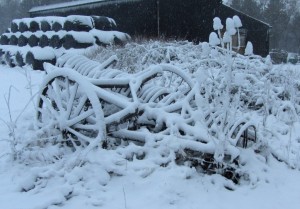 Before we get carried away with the snow, we can’t forget another record breaking month of rain in December, which at 181mm was 54% higher than average.  The total rainfall for 2012 ended up at 1486mm, or close to 60 inches, 46% higher than the average.

The continuing deluge throughout the autumn months left crops looking sad, slow and well behind normal development for the time of year, although admittedly a lot better off than many farmers who didn’t get any sown at all, or those who did sow, but have seen their crops fail.  The wet has not been much fun for the animals either, the young cattle on turnips have been plodding around in mud for weeks on end, looking quite miserable, we have been feeding them silage too, to try to keep them happy. 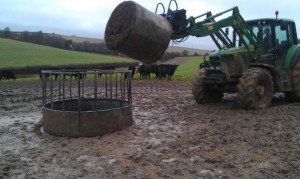 The lambs have done little better, but at least they don’t sink so far in the mud, they just trample too much of the leaf into the mud before eating it.

The cows are a lot better off, they have been in yards for some weeks now, with under cover shelter, and fresh bedding twice a week.  The more pregnant ones are now in the best accommodation at Shepherds Corner, with no weather worries, the ones at Websley still have to go outside to eat.  Calving is due to begin sometime in late February. 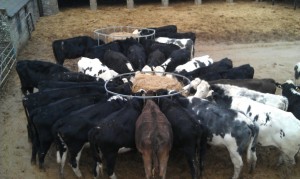 I promised last time to mention hedge-laying, well Martin Piper has been working away here since early November, and is now on his third stretch of hedge for us this winter.  The section shown here runs along the footpath joiningMiltonlane to the bridleway from Folly down to Sutcombe wood, and in places is very well populated with hazel, which is quite easy to lay.  The pictures show some of the detail required when laying, such as the use of forked branches to hold laid stems in pace, and how far you have to cut through trunks before you can lay them over.  It is always surprising how far you can cut through and find the tree will still grow again next season. 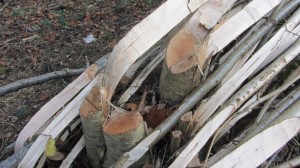 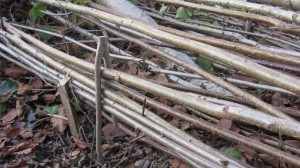 In the last few weeks, in addition to the routine daily animal feeding and bedding, we have been fencing in Shortlands, loading lorries with grain, repairing machinery in preparation for spring cultivations, catching up in the office, sent off potential seed grain for germination testing, and have been testing the market for logs and cordwood.

The last few days have shown such a wonderful change in the landscape, which won’t last long, and I thought it would be fun to contrast the winter scene with that of last May when the rape was flowering.  I am afraid this will look a lot better in colour on the website, than in black and white. 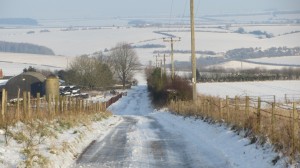 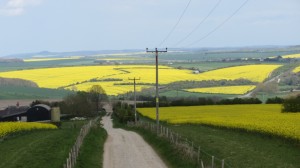 The view looking north east past Websley towards Sunrise and Pimperne.

And as a teaser to finish, who knows what these lovely creatures are? 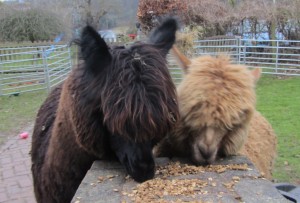