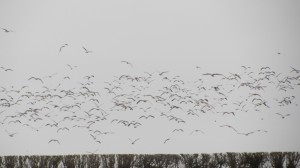 Pesky seagulls, all they want to do is steal my worms.  The merest sniff of freshly turned soil and in they pour.  There were hundreds of them.  Ploughmen are well used to them, and the smell of baking bird poo on the exhaust pipe, but you don’t expect quite so much attention from them when you are sowing barley. 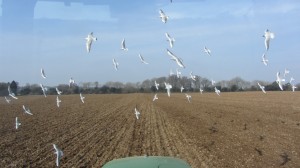 They are not really interested in any barley seed that might get left on the surface, that’s more suited to the pigeons, it’s the worms that seagulls want.  It is a sad thought that it is considered a traditional sight to see seagulls following the plough, yet they are stealing our fertility.  It is worms that do more good to our soils than almost anything else, you can apply as much muck as you like, but without worms to consume and recycle the manure, it is almost useless.  One of the reasons we gave up using the plough about 10 years ago is that turning over the top 8 inches of soil and exposing it to the air really annoys the worms.  They spend all year working the soil, digging tunnels through it which help to aerate it, and provide water channels to aid drainage, and then the stupid farmer comes along, turns their world upside down and exposes them to the vicious beaks of the seagulls.  We still cause some damage to the worms’ world by cultivating to four or five inches, in order to make a seedbed, but not so much as by ploughing.  We are not yet brave enough to convert to a direct drilling regime, where no cultivation is done at all, and the seed of the next crop is simply drilled into the ground through the residue of the previous one. The quantity of flint in our soil, and the increased risk trouble from slugs and weeds has discouraged us so far.

There are farmers who manage to make this technique work, and in theory it saves a lot of fuel, tyre-rubber and metal, however so far we have not seen a machine that could do the job well enough on our farm. 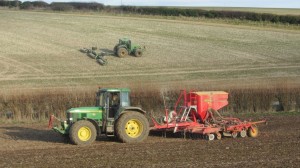 That wonderful dry period between Feb 14th and March 7th was a godsend, the first 10 days gave the ground a chance to dry out more than it had since last September, and although it remained very cold, we got the cultivators stuck into the ground and managed to sow all of our spring barley into quite reasonable seedbeds, in a period of around a week, which is just as well, because the weather has gone all pear-shaped again now.  We also managed to catch up with all the rolling which didn’t get done last autumn.  We have a strict rule in normal seasons, that if the ground is too wet to roll, then we shouldn’t sow, this is because our ground is so stony, that if we don’t roll, there is a very high risk of serious damage to the combine in the following harvest, stones and combines’ innards do not mix without a very sorry outcome.  However, when things got so desperate last autumn, if we were going to wait for the ground to dry out enough to roll after sowing, we wouldn’t have sown much at all, so we had to hope for the best and press on, hoping we could get it all done in a dry period in the spring before the corn is too tall.  Well fortunately we managed it, and although we had some pretty hefty frosts straight after long days of rolling, the crops have survived, and look a lot more combine-friendly now. 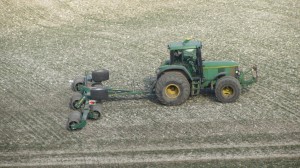 It has been all action in the cowsheds too, as predicted last month; the first cow gave birth on Feb 22nd, and since then we have had a steady flow, about 2 per day, which is very considerate of them.  Clearly the bulls were pacing themselves, and making sure the job was done properly before moving onto the next. 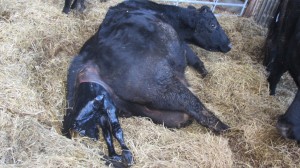 There are now lively bunches of calves in the yard at Websley, and at Shepherds Corner, who would dearly love the sun to shine and warm everything up, so their mummies can get outside and eat some proper grass, as they are quite bored with smelly old silage now.

The sprayer has been in action in the last few weeks, applying a bit of fertilizer to the rape and the winter barley, and spraying a pre-emergence weedkiller to the spring barley fields before the barley emerges.  It was also called upon to help augment the line-up of shiny machines at the open day held by C and O Tractors in Blandford last week, when several hundred local farmers enjoyed an evening drooling over new kit, and a tasty hog roast. 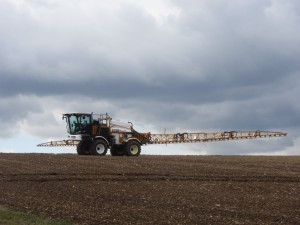 It has been difficult to decide how to time the first fertilizer applications this year, because the soil temperature has remained resolutely low.  The crops have been unwilling to grow in such conditions, and after late sowing into wet seedbeds, their root systems are less developed than in a more friendly season, and are therefore in no state to be able to intercept any applied nitrogen fertilizer.  The danger is that if you apply too early, before the crops have got going, and then you get another serious rainfall event, you risk the nitrogen been leached through the soil out of reach of the root systems, before it can be used.  The juggling act is between getting the fert applied when you can actually travel on the soil, and having it in the right place when the crop needs it. 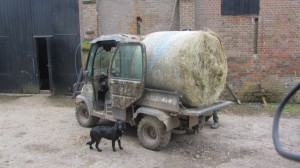 Although the cows with their new calves are tucked up nice and warm indoors, with plenty to eat and shelter from the weather, the outdoor animals have had to endure the foulest winter I can remember.  It has been so wet underfoot for so long, that the cattle have looked very sorry for themselves for months.  The recent dry weather perked them up no end, and they have actually looked a lot happier.  What they made of the snow and 2 inches of rain last weekend I do not care to imagine. 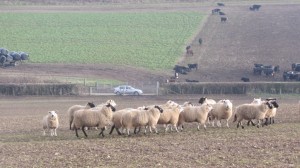