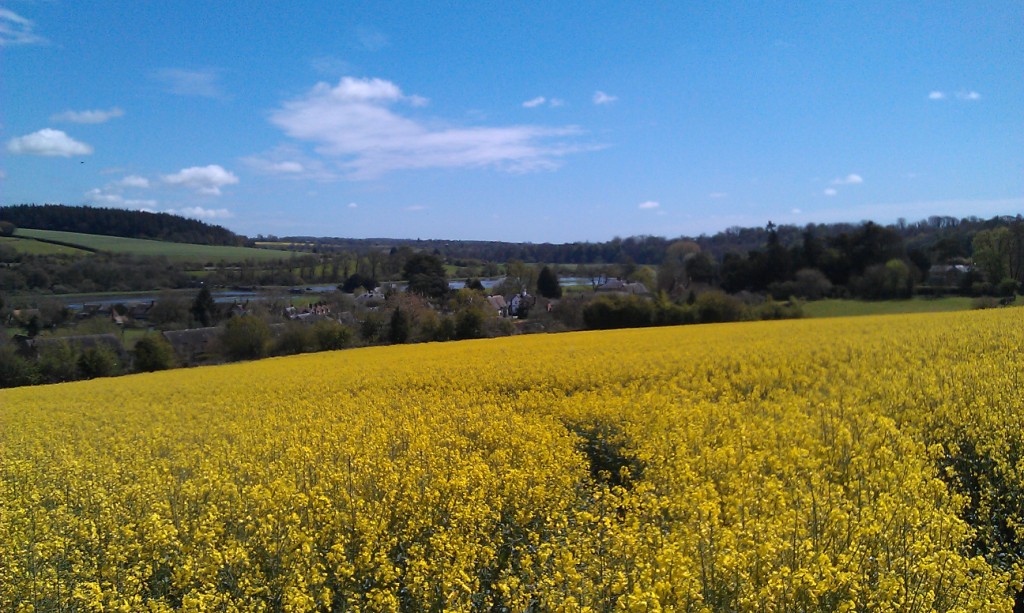 From Norton lane across Wynchard and Durweston to flooded meadows beyond

In the end we had 198mm of rain in April, second wettest since we began recording in 1986, there were 201mm in April 2000.  Not only that, but April was pretty cool, and the same pattern has continued this far into May, fortunately the rain has lightened, but it is still unseasonably cold, which has held back the growth of everything.  The most obvious effect of this is on the rape, which is still in flower after around seven weeks so far.  I can’t remember such a prolonged flowering period, and it seems to me to be a mixed blessing, because on the one hand there should be a good number of pods set, from so much flowering, which could mean plenty of seed at harvest, if the pods get enough warm sunshine to fill them, on the other, the long flowering has made it very tricky judging when to apply fungicide to control sclerotinia, a major disease in rape, which I explained at length in the June 2010 article.  In brief, the disease is an issue when falling petals stick to the damp leaves beneath, and then the spores of the fungus begin to grow into the plant using the rotting petals as a growth medium.  Our aim with spraying is to coat the petals with fungicide, and time it just before main petal fall.  This year petal fall is very slow and gradual, providing an extended period for infection.  We sprayed our rape on 1st and 2nd May, and we can expect about 3 weeks of cover from this, so if there are lots of petals still hanging on next week, we may have to go again, which we have managed to avoid in the past, when one well timed spray has usually done the trick.  To add complications to the decision making, the spores need a certain number of day degrees temperature (warmth) before they will germinate, and there is some debate as to whether the predominantly cool weather will have been an advantage in this case.  Nevertheless, many farmers will I know have taken the risk avoidance tactic of spraying twice, if not three times, and we may have to join them next week.

Of course if the rape has had prolonged flowering, then so have all the wild flowers, the primroses, bluebells, cowslips, wood anemone, and campion are  enjoying a wonderful long blossoming period, the woodland and downs are a real picture. 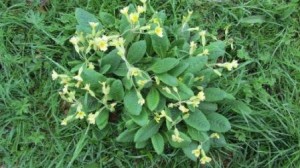 What should we call the plant above, is it a hybrid between a cowslip and a primrose? 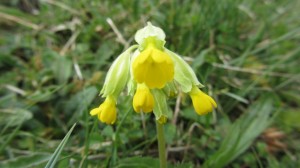 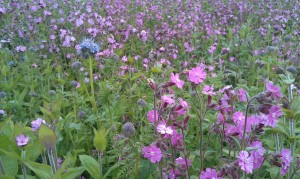 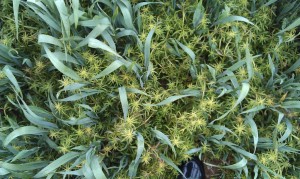 Spot the odd one out: one of the above four is not my favourite wild flower, it is here to show what happens when the drill runs out of seed when you are sowing wheat in early October, then you go back to patch it up in late October, the wheat has struggled all winter to get ahead of the cleavers, which are a menace.  They thrive in modern arable situations, they love nitrogen fertilizer, and are very competitive.  The sample you see here was sprayed on 5th May, and they are now suffering the consequences, however the wheat will not have time to fill in the gaps sufficiently to produce a useful yield, it is lucky it was only a 50 yard stretch.  I do not envy organic farmers trying to keep these things at bay with harrow combs and the phases of the moon! 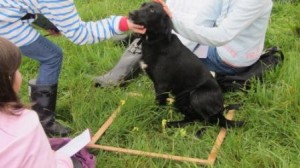 A school visit the other day was conducting a scientific survey, seeing how many plant species they could find and identify when the children threw the quadrat, up on the Rudge downland, their helper didn’t quite have the right idea.

Cattle are inquisitive creatures, and when anything occurs to brighten their day, they are sure to take a keen interest.  So it was this week, when we arrived to lay some chalk around the water troughs in the meadows, where it had got rather too muddy in the recent wet weather.  We had a mini digger and heaps of chalk, which was all too much to resist. 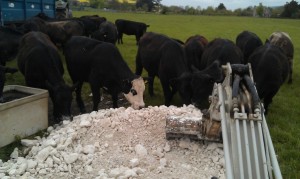 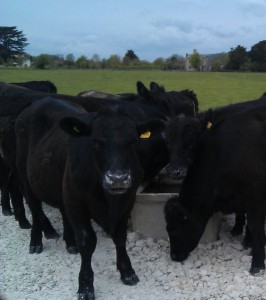 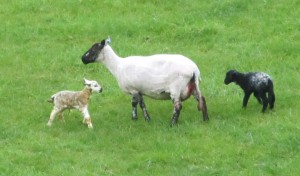 Our ewes have been busily lambing during the last three weeks, we lamb late in the season in the vain hope that the weather will be warm enough to suit outdoor lambing.  What a rude shock these poor lambs got when they popped out an hour or two before the picture was taken. 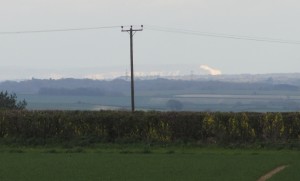 It is said that if you can see the Isle of Wight from the hills around here, then it usually means bad weather is on its way, well on the 6th May, there was the clearest view I have ever seen of the headland above the Needles, from the fields up at Folly, I hope the picture will do it justice.  I am sure the Ed will edit this bit out if the picture doesn’t reproduce well.

We had to move the cows back up through Sutcombe bottom the other week, and we left them in the rejuvenated woodland pasture in the bottom of Sutcomeb wood for a couple of days on the way, as they seemed to enjoy eating the cleavers and some of the other less desirable weeds, and this should mean we should get a better show of prettier wild flora later in the season, and next year.  What we hadn’t anticipated was that they would take to the wild garlic with such gusto, and when we went back to move them back into Foxwarren, the smell of their garlic breath was something truly terrible to witness, I am reliably informed. 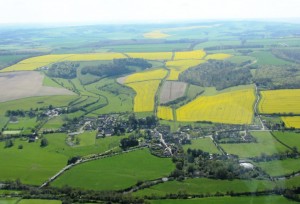 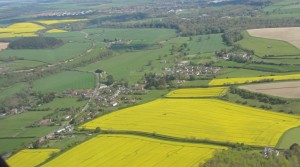 The last month has presented a load of great photo opportunities, from the floods, to the flowering rape, the calves and lambs, and a chance to fly over the farm from Compton Abbas airfield gave me a fabulous view of the village and the farm.  Unfortunately we couldn’t open the window of the little plane, so some pictures are suffering from some reflection in the glass. 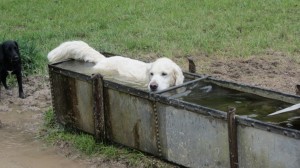 One last picture for the month, a friend’s dog spotted cooling off in a cattle trough today.