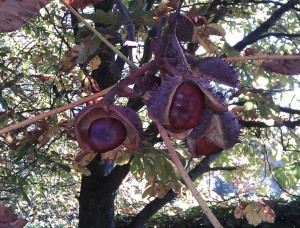 Why not start by talking about the weather for a change, I hear you ask? Well why not indeed; it’s what Farmers do all the time.  A beautiful October, so much warmth and sunshine, and so little rain in what in my records is on average the wettest month of the year, less than half an inch so far, and the average is around 5 inches.  The previous driest October was in 1985, at just under 2 inches.  Anything can happen in the next 10 days……. 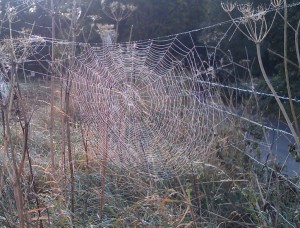 The autumn brings with it all sorts of beauties, an end of season harvest of conkers, sloes, apples and all sorts of hedgerow fruit, and so much of it plump and shiny as it has been so dry. I am mystified however to find a couple of primroses flowering in the garden this week, can anyone explain this?

The other weekend I spent the day over at the National Ploughing Championships at Bishops Lydiard, north ofTaunton, this was the fifth time the National competition has been held inSomersetsince it began in the 1950s, and it doesn’t get any closer toDorsetthan that.  The first requirement for a big ploughing match is for a decent sized area of consistent and suitable soil, this time the farm venue had the most amazing loamy red soil, with no stones, it felt springy underfoot, and the soil seems to just stay where it’s put by the plough, as you should be able to see from the pictures.  The soils here at home would be hopeless, they don’t have the structural strength, and have a very high flint content, so the open furrow usually falls in and will never look neat.

As well as a multitude of tractor ploughing classes, there was a pair of steam engines demonstrating steam ploughing, where the engines are stationed on each headland, and pull a two way plough backwards and forwards across the field with long steel ropes and large winch drums mounted under the engines, a system of whistles tells the other engine when the plough has reached the end of the field and needs to be pulled back again. 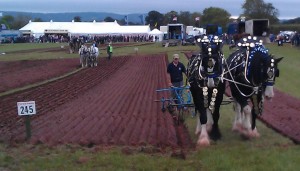 In contrast to this, and much quieter, was the horse ploughing.  Some grass had been planted specially for the horse ploughing area, whether this was for the benefit of the horses feet, or simply to make the ploughing look better I am not sure, ploughed turf always looks neater than a ploughed cereal stubble.  It was great to see that people are still prepared to put in the huge amounts of work required to teach horses to plough, and to do such a good job of it too.  It was always said that you could expect a man and a pair of horses, with a single furrow plough to plough approximately one acre in a day, and to do this, the ploughman would have to walk around ten miles. 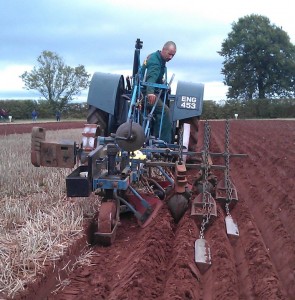 You can see from the picture of the tractor drawn plough above that the plough is towing some strange shaped objects behind it, these furrow formers or presses are smoothing and firming the furrows, in a class known as oat seed furrow ploughing.  The idea was that you would plough the ground like this, then sprinkle your oat seed onto the field, and then drag a set of harrows across the furrows, levelling the field and burying the seed at just the right depth in one go.  The seedlings would of course then emerge in nice neat rows.

I end up with very mixed feelings when I see all this effort being put into preserving what is becoming an outdated art.  It must be nearly ten years now since we ploughed much ground on this farm.  It is a slow and expensive business, the flints wear out tyres and plough parts in no time at all, you end up moving far more soil than you really need to in order to make a decent seed bed, usually at least 8 inches deep, and a ploughed field soaks up rain like a sponge, which then takes days and days to dry out again before it can be sown.  Conversely, a field which is only cultivated to 4 or 5 inches depth does less damage to the soil structure, and drains away much more quickly.  You also expose less earthworms to the greedy gulls if you don’t plough, and the earthworm is our friend, he plays a key role in building soil fertility.  Ploughing enthusiasts will come up with a multitude of reasons why ploughing is a good idea, but quite frankly I don’t agree with many of them!

Having said all of that, in my darker moments I can see that we may have to return to horse ploughing when the oil runs out.  Discuss. 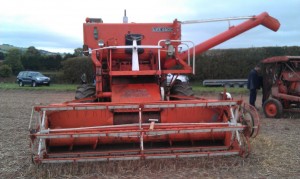 My last picture this month is a fine old combine that was in a line-up of various vintage beauties at the ploughing match.  It reminded me of when we had an identical one, back in the late sixties, it was very advanced for its time, it is an Allis-Chalmers machine, which I believe was built inAmerica.  Charlie Damen used to drive ours, and one of his funnier stories involved his pipe, which he smoked most of the time, which one day fell from his mouth into the front of the header.  He told Norman at the end of the day that it eventually arrived in pieces in the grain tank.  Luckily it didn’t catch anything on fire, although judging by the number of matches Charl used to get through, I don’t think it was lit for much of the time.

We finished sowing our winter sown wheats and barleys on Monday, and all are rolled down and waiting for a drop of rain.  Much of the wheat is now emerged, and today we began to apply weedkiller to keep down the competition from unwanted remnants of the previous crops.  The cooler weather of the last few days has meant that we can start blowing cool air through our stored grain, some of which is still over 20 degrees, since coming off the drier in August.