After two or three years of being all quiet on the Cuckoo front, this year they are back with a vengeance, we have been cuckooed in the morning, noon and night, from several different directions.  This must be good news, though I’m not sure what the explanation is.  I have even stood under a tree in the garden with the cuckoo singing nineteen to the dozen in the branches somewhere above my head. 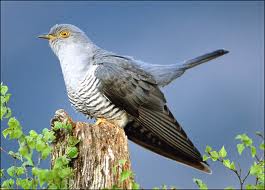 Listening to David Attenborough on the radio last night I learnt more than I ever knew about this strange bird.  How on earth did it evolve its bizarre nest hijacking process?  There are many different cuckoo species, but about 80% of them parasitise just three other bird species, the Dunnock, the Meadow Pipit, and the Reed Warbler, and there is a variety of cuckoo peculiar to each bird, so specialized that even the egg of the cuckoo is similar in colour and pattern to those of the target species.  The female cuckoo, when she finds a suitable target nest, perches on the edge of the nest, and ‘squirts’ her egg into it, with her specially shaped cloaca, then clears off.  When the baby cuckoo hatches, it grows very quickly, it has a kind of depression between its shoulders, which enables it to get underneath the other eggs in the nest, or other chicks, and simply heaves them out of the nest!  Its dumb foster parents continue to feed its voracious appetite, even when it outgrows them, and eventually it flies the nest, and heads back to sub-saharanAfricafor the winter, though goodness knows how it does this without mummy and daddy to show it the way.  For those unlucky enough not to have heard the bird yet this year, I will ask our clever Editor if he can put my recorded clip onto The News website. 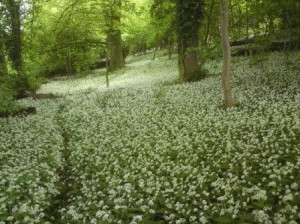 Anyone who has been out and about over the last few weeks cannot have failed to notice what a fantastic show of spring wildflowers there has been this year, as I mentioned last month. I have now adopted the theory that drought conditions have panicked the plant world into completing their life cycles before they expire from thirst.  Some of our crops are certainly exhibiting this, the wheat is coming into ear a week or two earlier than usual, yet it is still barely knee high, not a good sign.  The less said about the spring barley the better, and the poppies, well some more germinated after that lovely inch of rain we had a couple of weeks ago, the trouble is the soil was already so dry that the rain didn’t penetrate very far at all.  We need a hell of a lot of rain to wet up the soil, and the further into summer we get the less likely this is, although sod’s law dictates that as soon as the rays of the sun fall upon the roof of a combine harvester, the heavens open.  We have an enormous Soil Moisture Deficit now, this is the amount of water needed to bring the soil moisture content back to field capacity, which is the amount of water the soil can hold without running of or through the soil.  The higher the clay content of a soil, the bigger the cracks you get as it dries out, which can indeed be hazardous, a farmer friend on heavy Essex clay tells me it is so bad over there he is worried about losing livestock down the cracks. When I was with him in a dry summer a few years ago I recall pushing a tape measure at least 2 feet down a crack! 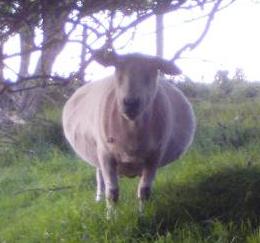 For the last ten days or so our ewes have been lambing, this picture shows one of our older pet sheep, a former orphan lamb, shortly before she produced her triplets, one of whom is now an orphan herself, as mum is a bit short of milk, as well as seeming unable to count beyond two.  One of the funny side effects of shearing before lambing is being able to clearly see the movements of lambs inside their mothers well before they are born.  Elbows and bottoms protrude through the ewe’s sides, while she just sits quietly and chews the cud. 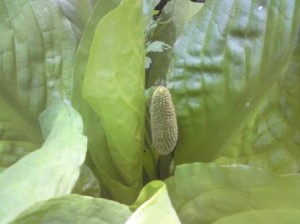 Can anyone tell me what this plant is, found near water?

We were very pleased to welcome a visit from one of the classes at Durweston Primary School last week, we examined a field of barley that they last visited just after it was sown back in September, it is now fully in ear, and we hope another short visit may be possible while the combine is in the field, sometime in July.  We also had a bit of fun working out why the Glebe field (behind the allotments) has taken on a spotty appearance, it took a while, but we got there in the end, it always comes down to the lavatorial when you visit a farm…..

A friend has brought my attention to the current Sainsbury promotion: ‘Feed a family of four for £50 a week’.  I have a number of comments on this, fortunately space here will limit what could easily turn into a rant, suffice to say that apparently the last time Sainsbury offered the same promotion was in 1994.  The fact that they can make the same offer 17 years later may be a sign that something has gone badly wrong with our food system, the supermarkets have undoubtedly got a lot richer in that time, and yet food is the same price or even cheaper, so how did that happen?  Someone got screwed, and the quality of many processed foods is definitely questionable.

The ingredients include a battery chicken, and £5 worth of imported grapes.

Read the label: What’s it got in it? and where does it come from?