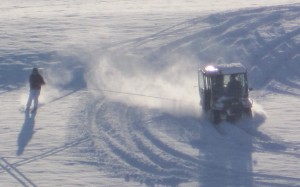 Having missed the chance to write about the snow around Christmas time in last month’s issue, I can’t resist putting in a couple of snowy pictures, even though it is a bit of a distant memory now.  Having had the heaviest snowfall around here for a good many years, it must be said  that the timing of it was remarkable, mostly in the holidays around Christmas, so many people were able to have plenty of fun with it, that is if they weren’t in a queue waiting to leave some airport for somewhere else.  The tobogganing was great, and after the snow packed down a bit, the speeds were pretty hairy, too much for me at that stage anyway.  It’s at times like that I feel sorry for people who live in flat areas, no hills equals no fun. 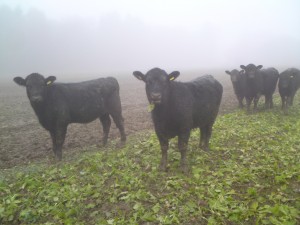 Anyway, as soon as the ground was covered in snow, we of course had to get some grub out to the animals who were supposed to be grazing turnips, as nine inches of snow makes them hard to find.  We took straw to the cattle, silage to the ewes, and some rolled barley to the hoggets (yearling sheep).  The problem with the hoggets is that they are not used to trough feeding concentrate feed, so it took several days for them to get used to coming up to eat.  It was interesting to see how the animals coped in the snow, as none of them have seen this quantity before.  After a day or two of moving the electric fence forward as usual, 4 yards per day, for the cattle, even though the turnips were still quite well covered by snow, we noticed that the cattle knew exactly where to dig for them, because the edge of the field was bare, where no turnips had been sown, and the cattle hadn’t even bothered to go there, there were no footprints in the snow, they only went where they knew there were turnips under the snow, by smell I suppose. 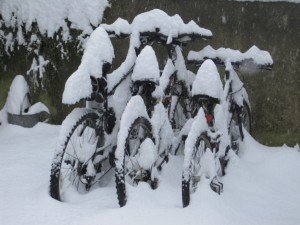 The snow became a bit of a nuisance on the roads of course, there was at least enough to justify dusting off the snowplough and pushing it around the lanes for a few hours, although it doesn’t do anything like as good a job as the forklift bucket, which scrapes the road much closer, leaving only a small amount of snow or ice to be dealt with by salt application.  It is surprising how much salt you need to sufficiently melt even one inch of ice, the tonne of salt that the council kindly delivered in early December was only enough to clear the important junctions twice, and after that we were allowed no more.  The bins at the corner of Church Lane and Milton Lane, and at Broadley, were used up during the first snowfall, and have not been replenished since.  Hence the lanes around here were impassable by anything other than good 4 wheel drive vehicles for nearly two weeks.  Needless to say, we were unable to load any grain lorries during that period, so there was a bit of a backlog by the first week of January, in one day we loaded out 180 tonnes on 6 lorries, and the next, another 120 on 4. 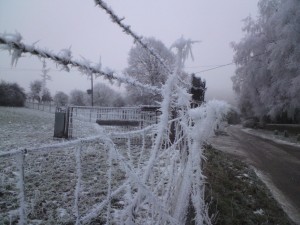 Since I last wrote in these pages, we have had the final chapter of the sad story of the Bull and the TB breakdown.  In early December, we were finally awarded the excitement of a TB test for all our cattle, which would determine whether any of our animals had TB, other than the poor old Bull, who was destroyed back in October.  Well fortunately all went well, and all animals tested clear.  Within a couple of days of the test, we got the final test result from the bull, which was where tissue samples are cultured, to try to get any TB present to grow, and hence prove he had the disease, well this one tested negative, as had the previous one, a visual examination of the carcass.  So, apart from the fact that he failed the first skin test, it rather seems that he died unnecessarily, as he did not appear to have TB at all!  What a shambles, and a pointless waste.  Please see previous issues for further ranting on this subject!

We recently had the cows pregnancy diagnosed, which is a highly skilled operation carried out by our own very local Vet, it involves long gloves, and a good reach.  Apparently the cows’ diet at the time makes quite a difference to the ease of the job, though I feel any more detail at this stage may be too much for the casual reader, who may be enjoying their breakfast.  Suffice to say, we were pleased to find that all except one of the cows is pregnant, and of the 17 heifers, all except four are pregnant, so the bull lives on in spirit at least.  The heifers will get a second chance next year, but the cow will be off to market tomorrow.  The patter of tiny hooves is expected sometime in March.  The cows will be moving to Shepherd’s Corner for the final stages of their pregnancy, and their housing there is being prepared this week. 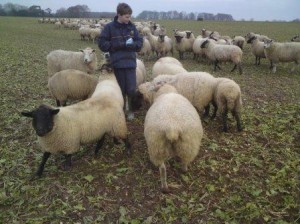