We have now harvested 218 out of 620 hectares of the 2011 harvest, starting with the winter barley, which was a very disappointing crop, a low yield mostly attributable to the very dry weather in spring, although at least preliminary testing shows that it should be good for this years malting campaign, so supplies of the best real ales should be safe for another year!  This was followed, after a week long rain break, by the rapeseed crop, which has defied all the extreme weather, and has turned in a near record breaking yield.  We finished cutting the rape this evening at around 8.30pm, after a wonderful 5 day charge straight through all eight fields, moisture levels have been amazingly low, some today as low as 5.5%, the rape needs to be below 9% for safe storage, and this is in fact too low, less moisture means less weight to sell.  There’s plenty more harvesting to do, but nothing else is ready for now, the spring barley is about a week away, with the earliest wheat not far behind. 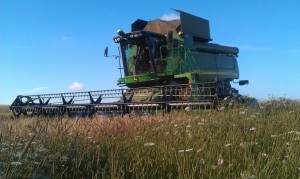 The baler men have been busy, although have been terribly frustrated by the rain on and off last week, which has meant some barley straw has lain on the ground for nearly two weeks, and has taken a lot of drying, there is still some left to bale, so a day or two more of breezy sunshine would help.  We would then like to get on with a bit of muck spreading on the barley stubbles, apologies for any smell, and preparing the ground for next year’s rape crops. 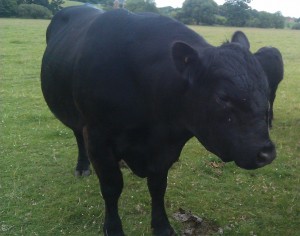 Our bull Bonnie has used up his allotted time of nine weeks with the cows, any who are not pregnant now will unfortunately have to be sold, as we would like to keep a fairly compact calving period.  He is enjoying a peaceful family life now, with one cow and her male calf to keep him company.  We have been keeping him friendly by feeding him a handful or two of nuts every morning, and of course the cow wants her share too.  We are still watching him closely to see if he contracts ‘red water’, otherwise known as tick born anaemia, which is always a risk with an adult animal imported onto a farm known to carry the disease.  He was immunized on arrival, but that is not failsafe, so we have to patiently wait for him to pee once a day to check that all is well. 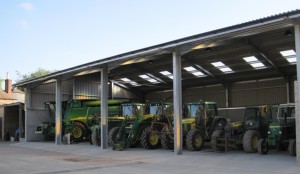 The new tractor shed is now complete, apart from the electrics, and as the picture shows, can actually fit most of our machines in it all at once, which was impossible in the old one, it is already making life much more efficient, being able to service machinery undercover, with plenty of room to open or remove guards for access.  We have never been able to service the combine undercover in a well lit shed before.

Do you know what a pooter is?  It is a simple little plastic pot, with a suction pipe on, which you can use to safely capture insects and assorted small creatures, for observation, and even sketching.  I had never heard of these devices until Mrs Santer’s class from theVillageSchoolvisited recently, for a minibeasts survey.  We had great fun catching anything from grasshoppers to woodlice, and several children managed to gently catch butterflies in their hands, for a closer look, and for Mr Fale to help with identification.  We saw Ringlet, and Skipper butterflies, and several others, as well as an interesting hawk moth. 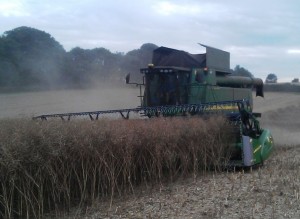 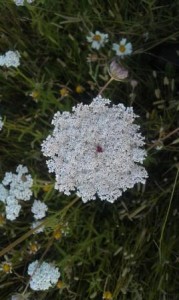 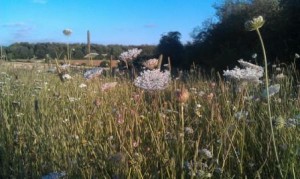 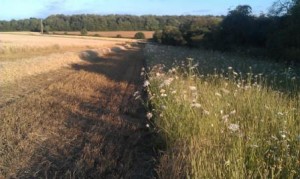