This lovely Spring weather, in a most benign and at times beautiful March has been a dream, we have been able to get on with all sorts of jobs which at this time of year are not often possible, because the ground is usually too wet to travel on.  We got all our spring barley sown back at the beginning of the month in a 4 day blitz, we have also sown half of the season’s poppy crop, and hope to do the rest this coming week.  The winter crops are coming into the new season rather slower than usual, because it has been so dry, and until quite recently, still cold at night, the soil temperatures are slow to climb when it is as dry as this, and we wouldn’t mind a bit of warm rain before too long, to wash in the fertilizer, and get things moving on a bit. 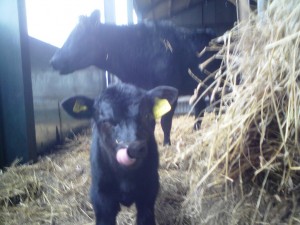 During the last 3 weeks, our cows have steadily been unloading their fluffy little bundles, we now have over 20 lively little characters like this gambolling around the yards at Websley and Shepherds Corner.  It should be noted from my photograph that their mummies teach them from a very young age how to wipe their noses.  If only they had the brains to control where they drop their country pancakes too, then we could use far less straw keeping them clean throughout the winter.  Not much hope there I’m afraid.

The dry weather has enabled us to get on with a lot of hedge and woodland work,  after fencing in and gapping up the old hedgeline in the Glebe, we have moved on to do some more coppicing of an old hedge in Shortlands.  This old hedge like so many others on the farm, is overgrown and falling over, there is a lot of ‘old man’s beard’ in it, which is a vigorous wild clematis which can throttle and pull down trees.  It also makes cutting down rough old hedge trees quite hazardous, because they don’t fall the way you expect.  We lay as much of the existing hedge as possible, but the bigger stems always crack, so it is just as well to cut them off in the first place. 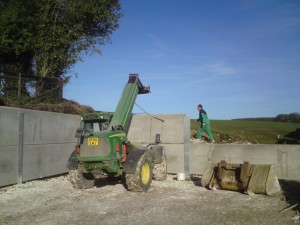 Being dry underfoot also means that the work for the new tractor shed is moving along, we have finished the retaining wall around the site, and have taken down the old 1970s shed that will shortly be replaced by something more suitable for modern day sized machines.  The yard consequently looks huge and bare now, and we are hoping that the foundations for the new shed will be dug shortly, and the steel frame for the new shed will take shape before too long.

We were amazed last week to hear the unmistakable sound of a Swallow in the yard, and there he was, perched on a wire above the yard.  But only the one.  I imagine he must have been passing through, as our own Swallows don’t usually arrive until the second week in April.  A little research has told me that the time of arrival of the swallows is related to the temperature at their destination, because this will influence the availability of their food source, which is mostly airborne insects.

Judging by the way our oilseed rape is this year already plagued by pollen beetle, this could be sooner than usual this year.  The beetle is so populous that we will have to spray them for the first time ever in a winter rape crop, this coming week.  The shiny black little beetle burrows into the base of the unopened flower in search of pollen, and can cause the flower to abort, therefore affecting yield.  Once the flower is open, the beetle can get at the pollen without causing damage, and so then doesn’t need to be controlled. 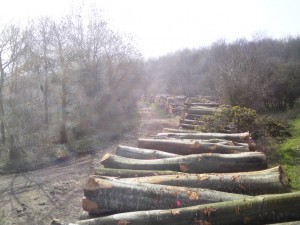 But back to the swallow:  British swallows spend their winter inSouth Africa: they travel through westernFrance, across the Pyrenees, down easternSpainintoMorocco, and across theSahara. Some birds follow the west coast of Africa avoiding the Sahara, and other European swallows travel further east and down theNileValley. Swallows put on little weight before migrating.   They migrate by day at low altitudes and find food on the way. Despite accumulating some fat reserves before crossing large areas such as theSaharaDesert, they are vulnerable to starvation during these crossings. Migration is a hazardous time and many birds die from starvation, exhaustion and in storms.  Migrating swallows cover 200 miles a day, mainly during daylight, at speeds of 17-22 miles per hour. The maximum flight speed is 35 mph.

Who said ‘One swallow doesn’t make a summer?’  We look forward to their wholesale return shortly.

The spring has brought out lots of pretty wild flowers, primrose, celandine and the wood anemone are all out in great numbers around the farm, and the shiny dark green bluebell leaves are promising a good show of flowers in a few weeks time. 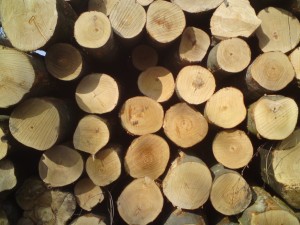 In the woods on Shillingstone Hill, there has been a lot of timber extraction going on for the last few months, there are some huge stacks of timber waiting to be taken away.  Although it is easy to, one must not feel sad at this, these are commercial woodlands, providing an important source of home grown timber for various markets, one trunk I inspected showed at least 55 rings, and beech trees of this size are pretty lumpy to carry around.  I must confess to mixed feelings when you hear that quite a lot of this kind of timber goes for firewood, but one should remember that this is a far more climate friendly form of heating than using oil, coal or gas that has taken a few million years to make, not just 55.