Do we dare to believe that spring is finally here?  At last the daffodils decided to emerge after one of the longest and coldest winters I remember for perhaps 20 years.  There is a lot of catching up to do now, though invariably the crops catch up with the season in the end, and we usually begin harvest between the 15th and 20th of July every year.  Our oilseed rape is slowly coming into flower, and in another week, the fields around Shepherds Corner, and on the Bonsley end of Shillingstone Hill will be a riot of tastefully created bright yellow.  The bees will be happy, with a hundred hectares to forage over in this parish alone.  Well actually the land on the hill lies in Shillingstone parish, but that won’t worry the bees.  Late frosts like we have seen in the last week can sometimes put an interesting wrinkle in the stems of the fast growing rape plants, but it doesn’t seem to do any lasting damage.

We managed to finish our main spring sowing campaign last week, into rapidly drying seedbeds.  We have sown around 100 hectares each of barley and beans, and 38ha of poppies.  Perceptive walkers of the parish paths will have noticed lately that several fields have a bald area around the outside of them.  We have purposely left a significant quantity of 6 metre margins unsown, and on these we will shortly be sowing a selection of grass and wild flower seeds mixtures as part of the Higher Level Stewardship scheme that we joined recently.

These 6 metre margins, which can be tricky to establish well, especially in a very dry, or very wet spring, are designed to encourage insects and small mammals to colonise field edges, and to provide food and nesting sites for birdlife.  For this reason I would like to point out that, although these areas may look very attractive to the casual walker, I am afraid they are not designed with this in mind!  It is sadly a common fact that, although it is great for the health of the walker to get out and about in the countryside, and we are always pleased to see people out walking on the farm paths, the fact that so many walkers are accompanied by dogs means that very often, the areas adjacent to footpaths have been shown to be pretty well devoid of small mammals, and particularly, of ground nesting birds.  I have probably mentioned before the problems faced by ground nesting birds, even worse than dogs, who generally just frighten them away, is our dear stripy-faced friend the badger, who is notorious for wandering far and wide during the hours of night, and digs up grass, and arable fields, even people’s gardens, in search of worms.  Next to worms, they love birds eggs, and will happily steal from nests on the ground.  This leaves us with a problem, as the badger, being a protected species, is probably the biggest success story currently, and he is very busy colonizing ever wider areas of the countryside, and with ever more mouths to feed, what chance do the birds stand?

The other day we had a bit of fun, one of the best days of the year is the day when we let the cattle out.  They definitely get a bit stir crazy after being shut in a  yard for 3 or 4 months, and once you open the gate, given half a chance they will be half way across the next county in a trice.  You would think that the cows, now proud mothers of handsome calves, would wear their responsibilities with a little dignity.  Not a bit of it, they will charge around the field like happy children, full of the joys of spring, closely followed by their calves, who have not yet experienced the wide open spaces of whole fields.  They can certainly run, and jump, kick their legs in the air, and bellow, and stick their tails in the air and run like hell down to the far end of the field and back again.  Once they have got this all out of their system, they’ll put their heads down and get stuck into some proper grass, which they much prefer to dry old hay, or smelly old silage.  Soon their winter coats will fall out and they will take on a healthy sleek look for the summer. 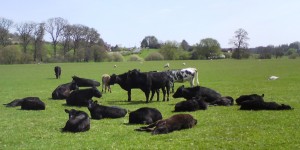 In the arable department, we have spent the last week putting the main doses of fertiliser onto the winter wheat and spring barley.  We do this in liquid form, with the sprayer.  It saves greatly on packaging, as the fertiliser is delivered by 20,000 litre artic tankers into our tanks, from where it is taken to the sprayer in the field by our own 9000 litre bowser.  The fertiliser is moved between tanks, bowser and sprayer by small  Honda pumps.  We have long found this to be a far simpler operation than using bagged fertiliser.  Firstly, nitrogen fertilizer in bags must be stored indoors, in heaps no greater than 25 tonnes (we use over 250 tonnes equivalent each year), this is because of fire risk.  Secondly, the bags then need to be hauled to the field by a man with a forklift, then must be loaded into the Spreader.  Finally, the empty bags, which consist of an inner, waterproof plastic layer, and a tough woven polypropylene outer, which gives strength to enable the bag to be lifted from above, must be recycled, which means the inner and outer, which are fixed together with an annoying plastic zip tie, must be separated, and stored until the recycling company comes on one of their collection rounds.

On Friday, we decided we must spray the beans, which are around the 6 leaf stage now, with an insecticide to control the pea and bean weevil (Sitona lineatus).  The picture shows very clearly the damage done to the small plants, like someone has gone round each leaf with pinking shears.  The most important damage however is done to the roots, where the nitrogen fixing nodules should be forming.  The larval stage of the weevil, which hatches out from eggs laid in the soil in previous years, chews away at the roots, while the adults have a go at the leaves above ground.  One quick dose of cypermethrin, on a calm sunny afternoon, when the little blighters are feeding voraciously, usually sorts out the problem.

Next week weather permitting, we hope to be starting on applying fungicide to the winter wheat, to protect it from diseases, primarily rusts and septoria, which, if or when the weather turns damp again, is usually the biggest yield robber in this part of the country. 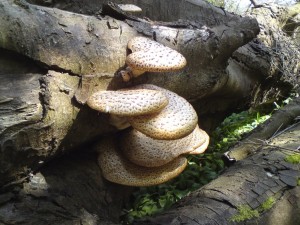 NB. This picture is not the kind of fungus that grows on wheat crops!

Septoria can take up to a third of the yield of the crop if not controlled.  During this pass over the crop, we will also be applying final weedkillers to some fields, to tidy up any escapees from the autumn programme.  This is mostly cleavers (gallium aparine), more commonly known as sticky willy, or goose grass, which are very hard to control before the warmer spring weather arrives.  Whilst googling for the latin name, I have just discovered the following, which was news to me:

Cleavers is used both internally and externally. Internally, it is useful for urinary tract issues. Its diuretic and anti inflammatory properties are useful for bladder infections and painful urination, kidney stones and problems of the lymphatic system.

Common Uses: The dried plant is often infused in hot water and drunk as a tea, which has a most soothing effect in cases of insomnia, and induces quiet, restful sleep.

So there!  Perhaps we should grow them as a crop in their own right, we know we can grow them, and we spend a fortune controlling them!

Let’s drink a toast to the herbalists.

PS  Our main lambing will be starting within the next week or so, and we would be very grateful if people could please take extra care to keep dogs under control around the farm, and not to disturb the sheep, who, like any pregnant mammal, appreciate the freedom of being allowed to get on with the job in a quite corner somewhere!  Many thanks.