After my comments last month about the happy bees with so many acres of flowering rape to forage over, I have been taken to task over the quality of the honey made from the nectar from said rape flowers, which was described as bland!  Not one to be seen to under sell any of the products from our land, I would rather describe it as ‘a multi-purpose honey, particularly suited to blending with stronger honeys, and popular with commercial beekeepers.’  I have also heard it said that it crystallizes rather too quickly, which can make extraction difficult, but I am sure this can be overcome by prompt and efficient hive management.  If the bees didn’t like it, they wouldn’t go there.  (the picture above looks better in colour, try the website!)

Whilst many areas of the farm, and no doubt many gardens now, are crying out for rain, the rape is the one crop that has hopefully benefited, so far, from a dry flowering period.  There is a disease called Sclerotinia which can wreak a bit of damage in rape, it gets into the stems and then kills off the plant above the point of attack. It often begins at the point where a flower petal has fallen and stuck onto the plant. Infected stems become bleached and death of the stem and premature ripening of the top follows. Plants infected at flowering produce little to no seed. Splitting the infected stem open reveals a white mould in which hard black fungal structures, known as sclerotia, can be found. These are similar in size to rat droppings, and once the crop is harvested, they fall to the ground, to become dormant and then wait for the the next suitable conditions.  These sclerotia will germinate next spring to produce little mushroom-like spore producing structures called apothecia. These are shaped like miniature golf tees, and usually appear about the time that the rape begins to flower, often under the protective canopy of a cereal or rape crop. The apothecia produce air-borne spores (ascospores) which are carried by air currents for long distances. The ascospores do not directly infect the rape plants, it is only the spores that land on rape flowers or petals that are able to cause infections. When the petals fall, many will stick to leaves and stems, and the spores are then able to use the flower parts as a food source to germinate and infect the plant. Moist conditions lasting for two to three days, from rain or dew are also required for infection.  This year I would like to think that pressure from this disease will be lower than usual, because of so little rain, and not a great deal of dew either.  In any case, we usually spray for this disease, as a precaution, the idea being to cover the flower petals with a fungicide so as to discourage the spore growth.  Many farmers will do this twice, especially in a long flowering period, to reduce risk still further.  We have gone for a one hit approach this year, but we never know which approach is right for the season until it is far too late.  This disease is one of the main reasons why we must practice rotational cropping, so that there are at least four years of different, sclerotinia resistant, crops between each crop of rape. 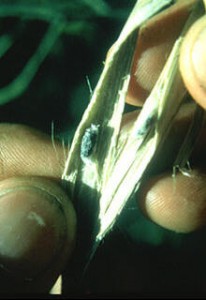 I wish I could say that the rest of the farm is benefitting from the weather, but I cannot.  The shortage of rain is getting increasingly serious, particularly for the spring crops which have seen very little rain at all since planting.  The cold weather earlier in May has held everything back, and at the end of last week I would say we were still well over a week behind a normal season.  It will be interesting (frightening) to see what effect this hot weekend will have, in the presence of so little moisture. 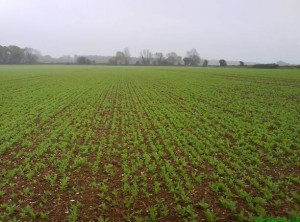 To return to a more positive spin on the weather for a moment, the sheep have been enjoying an ideal spell of lambing weather.  Warm and sunny has been great for lamb survival, a large part of the reason we lamb so late in the year.  The drawback of course is that we are already quite short of grass.  No rain = no grass.  Dairy farmers I know have seen 40-50% reductions in first cut silage yield, which is pretty serious, and as there has been no rain since first cut, there will have been precious little growth for second cut.  A consequence of this has been that we have been advised to enter the straw from all our crops into the annual straw sale this year.  Rape straw and bean haulm usually get chopped by the combine and incorporated back into the soil, however it is thought this year that fodder will be so short, that every last bit of material will have a market, at least for bedding. 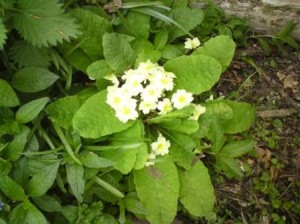 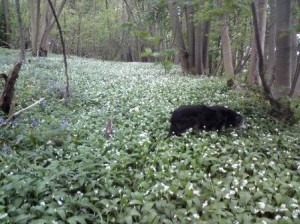 The fine weather has certainly made for some spectacular flowering events everywhere, the bluebells seem to have gone on for ages, the wild garlic is amazing, and the chestnut trees are magnificent. 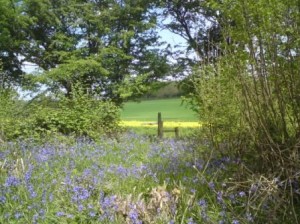 This is also the time of year for orphan lambs, and so far we have three noisy little characters in the garden.  We are feeding them four times a day at the moment, but this will drop back to three as they begin to nibble a bit of grass, and try some pellets. 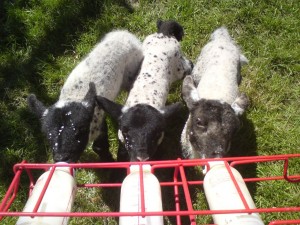 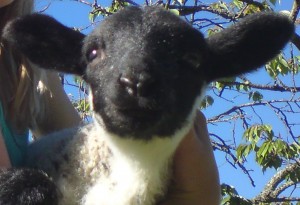 By the end of June, the weather will have had the last laugh as usual, and we will be moving towards harvest with more of an idea of what the chances are of success with each crop.  Before we can harvest, we need to clean out the grainstores, and pull the wild oats, jobs which can be challenging, but are enjoyed by some if not all who try it.  We would welcome any hard working people in search of a bit of pocket money for a week or two, this can be the perfect antidote to weeks of cramming for exams.  If you are interested please get in touch.