Since I last wrote in these pages, the days have got a lot shorter, the temperature has dropped at least 10 degrees, and it has got a whole lot wetter.  We have had two inches of rain in the last week, which really has brought on the winter squelch underfoot.  The cows and calves are now yarded at Websley, waiting for their TB test, so we can find out whether we will be allowed to sell any animals, before they demolish our fodder supply.  To date we have still not had confirmation that the poor old bull actually had TB (see October issue for full story), and we have been kept in frustrating limbo for all this time.  In the meantime w have been considering how to respond to the government’s consultation on control of TB in wildlife.  If you are at all interested in this matter, I would urge you to read the consultation on the DEFRA website, and perhaps consider responding.  As of 10 days ago, just 1600 responses had been received by Defra, and 70% of these were against allowing any control of badgers.  My first picture shows how Mr Badger doesn’t care where he walks in his nightly perambulations all over the farm, I only hope Mrs Badger gave him a good hiding when he traipsed indoors without wiping his feet. 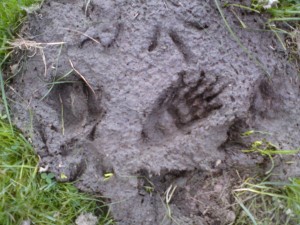 I wonder if you can see how many different species have wandered through this country pancake.

My next picture shows another animal who doesn’t seem to mind where she walks, this tasty porker is heading for only one outcome next month, so her plasterboard breaking days are numbered. 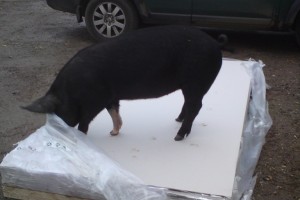 The 6 gilts at Shepherds Corner have provided endless entertainment for all of us, and especially the school groups who have visited recently.  The only trouble is that they now seem to be bored by their field, and are hell- bent on escaping every day.  I never cease to be amazed by how fast pigs grow when you put a good supply of grub in front of them.  They are approaching 100kg now, and look very tasty.  I have recently learnt how to straighten the tail of a pig, it is entirely humane, and the pig barely notices!

If you have been out and about much, you may well have noticed that we have this year sown grass margins around very many of our arable fields.  This is part of an environmental scheme that we have joined, aimed at taking targeted areas out of production, and replacing the arable crop with supposedly more wildlife friendly vegetation.  We very much hope that the low vigor grass and wildflower mix that we have sown will gradually attract and encourage a wide range of insect life, and hence bird life that will be attracted by the insects.  We have also taken other areas out of arable production, and sown bird food plots, and in one case, a field which we are hoping to return to classic chalk downland.  To do this, we have harvested the seed from the wildflowers on existing downland, and have sown it on the new area, hoping that in just a few years, we will have a larger area of interesting vegetation, which will hopefully attract a wider variety of butterflies and other species. Our greatest hope with all this work is that we may eventually persuade the English partridge back into the area.  Where we are worried we may have difficulty is where people seem to think these new areas are open to public access, I am sorry to say this is not the case, any hint of dogs, horses and people walking these areas will prevent any chance of what we are hoping for, and will be completely counter productive, as the hedgerows, which are already important habitats, will be disturbed also.  I do hope that people will understand and appreciate this, there are already many footpaths around the farm, and we would be very grateful if people could continue to use these and not stray too far. 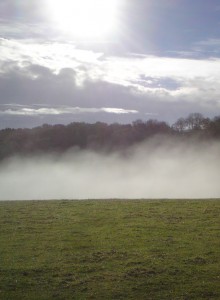 One morning last week, I felt on top of the world, while the village was shrouded in early morning mist, the sun was shining on the top of the hill.  You can see the top of the cloud here in roundbush, and the tops of the Rudge wood trees across the valley.

I would like to have shown a picture of the beautiful autumn colours of the last few weeks, but as the News doesn’t yet run to technicolour, I think it would be a waste of time and space.  I hope you enjoyed it all in person. 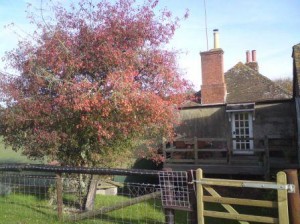 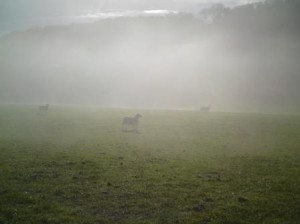 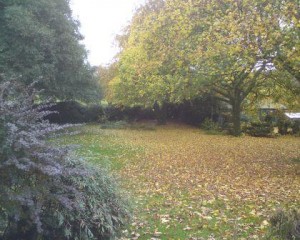