Despite the freezing weather lately, last year’s lambs have been thriving on turnips.  Even when the turnips have been frozen into the ground, the lambs gnaw away at them, and have been putting on a lot of weight. We sent on 95 for slaughter about 10 days ago, and picked out another 85 yesterday.

The great thing is that the lamb price has been higher lately than I can ever remember, although readers may already have noticed this in the shops.  TheUKsheep industry has been in decline for many years, as it has been notoriously unprofitable, and I am now wondering whether we have got to the point where a shortage is at last leading to a rise in prices to sensible levels.  Higher prices will however encourage imports, as will the rise in the strength of the pound that we have seen in recent weeks.  Incidentally, this has had a very bad effect on the price of wheat too, which has lost nearly £10 per ton in the last week.

But I digress.  When rounding up the sheep, we have always in the past relied on the help of a trusty collie dog.  Our poor old collie, Bob, sadly died back in the summer, and although he didn’t get as much work as a hill farm dog might, he was always extremely helpful on the days we were working with sheep.  Since he died, we have wondered whether we could cope without a collie.  Dougal has been taking his Labrador with him, who has ambled along and helped to edge the sheep in roughly the right direction, without getting over-excited, like a collie can, and who all too often then runs round and pushes them back through the gate you have just carefully guided half of the flock through, undoing all the good that he has just done. 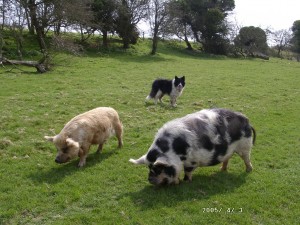 The Lab has been just right, until that is, we get to lamb sorting season.  The lambs haven’t yet developed the flocking instinct.  A group of ewes when disturbed, will always tend to flock together in one bunch, and in this way are quite easy to move around, because they move as one.  Lambs however, are a different matter, they run around wildly, often round and round in a large circle, not going anywhere, and then individuals will dart out of the flock randomly, and others will follow them.  It is a bit like trying to drive a lake of water, it keeps slipping through your fingers.  They are fast too, far too fast for a mere human on foot, the motorbike is a help, but it can’t change direction fast enough.  The pickup is OK, as it can be jammed into reverse quickly, and has good acceleration, but if you haven’t got a collie, you need plenty of people.  3 plus a dog is not really enough we discovered, the next time we had 5 plus the dog, which went very well, then yesterday, just Dougal and Gary spent ages trying to get the damn lambs into the handling system, and nearly had to give up as it was getting dark, they succeeded in the end, but were run ragged.

Collies have had centuries of selective breeding to develop their sheep handling instinct, and the instinct is very strong.  To watch a skilled shepherd working several dogs at a time is a real treat, the sheep respect the dog, and the dog knows how to anticipate the sheep behaviour, and can react very quickly.  Once we have sold all the lambs, we may again try to fool ourselves that we can cope without a collie, until we get to shearing time that is……..

As well as frozen turnips, the frozen ground creates another problem.  We fold the sheep on the turnips, a part of a field at a time, controlling them with electric fences, which have posts with a metal point which sticks in the ground.  This is fine normally, flints sometimes get in the way, but you can usually push them in quite easily.  However when the ground is frozen solid, this job gets very difficult, you can’t tell whether you are pushing against frozen soil or a flint, so you stamp on the cross piece, and the post then bends, making it even more difficult, so you don’t push it fully in, then when the thaw comes, the fence falls over and the animals escape! 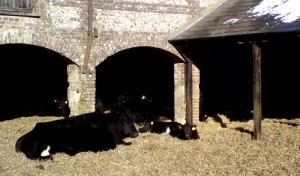 The cows with calves are now in the yard at Websley, happily munching silage.  We are still waiting for the last seven at Shepherds Corner to calve, but they are taking their time.  We had 3 calve in 12 hours at the beginning of the week, but no more since.  The bull must have got tired after that burst of activity.  These cows, who were being fed straw earlier on, which being less nutritious,  reduces the chance of calves getting too big before birth, are now on silage too, and it is amazing what a difference this has made to the quality and consistency of their dung!  Too much detail??  The practical consequence of this is that we have to straw them down more often, every other day in fact, to keep them clean.

The freeze up meant that the lanes approaching the farm were very slippery, and that planned deliveries of fertiliser, and lorries to take grain away, couldn’t happen.  There was a bit of a logjam last week, when after the road cleared, we loaded 250 tons of grain, and unloaded 55 tons of fertiliser in a very short time.

Last year we had a good dose of snow in February, so it may not all be over yet.  So far we haven’t had enough to do proper sledging, or snowploughing, we can still hope! 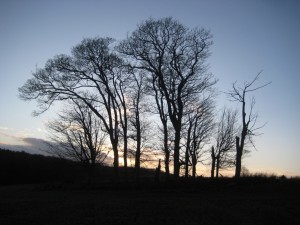 I cannot finish without mentioning the most momentous news to affect the farm in very many years, an event which I have been dreading for a long time. Norman has finally retired.  At Christmas,Norman hung up his boots after 36 years working at Travellers Rest, and for several more years before that, for Humphrey Gifford on Durweston Farm.  I was a spotty youth of 15 when Norman started here, and I cannot begin to think how much he has taught me over the years.  We are immensely grateful for all he has done for us, and wish him the very best in his retirement.

Life is already different, there are only 3 of us here for now, but we have found a new young man to join the team, He begins next month, and we hope his youth and energy will carry us old Codgers forward into a new era.