A couple of weeks ago I headed northwards to Newark in south Lincs to The ‘Grain UK’ event, a long way to go for something sounding as dull as that, however I had a few issues I needed to explore relating to grain drying, handling and storage, and at this event all the suppliers of the right sort of kit convene for a day to talk Grain.

In particular we are looking to improve a couple of areas of our grain store, firstly, we need a new cleaner.  This is a machine which sorts good grain from chaff, dust, unthrashed heads, stones, etc, and when set up in the right way can also sort small grains from big grains, and this is the bit we are most interested in.  We have an ancient cleaner that came out of the ark, and which can no longer keep up with the volume of grain that the combine or the drier generates, it also needs constant attention, because it jams up, overflows and moans a lot.

The malting barley that we grow is sold to an exacting specification; we must produce barley below 1.6% protein, below 14.5% moisture, above 64 kilogrammes per hectolitre density, at or above 98% germination, and a certain proportion of the grain must pass over a 2.5mm sieve.  For Maris Otter, a small barley, this is 70%, for most other malt barleys, this must be 90%.  The protein, the density, and the grain size can be influenced to a modest degree by what we do to the crop in the field in the way of fertilizer timing and quantity.  The best we can do to preserve the germination and density is to harvest promptly when ripe, and dry carefully, however sunshine and rainfall timing and quantities through the season have by far the largest effect generally, and in a difficult season, a huge amount of luck is required as well, and grain size particularly, falls into this category.  If this is wrong, we can at least do something about it.

The upshot of all this is that we have 450 tons of maris otter to clean, because there is too much small grain in the sample, and we have a further 600 tons of spring barley to redry because the conditions at harvest were far from ideal, and we didn’t get the it dry enough the first time.  My theory is that although we were already 2 weeks behind a normal season, the spring barley was barely fit when we cut it, all at 17% moisture, and it took a great deal of time and fuel to get it dry, approximately 12 litres of diesel per tonne in fact, whereas interestingly, most of the wheat, harvested at around 19%, needed only 7 litres per tonne to dry it.

It is commonly accepted that a crop which is not fully ripe will be more difficult to dry, however when we have got to mid august, still with several hundred acres of uncut barley in the field, we get very nervous about the germination holding out, especially if it rains every other day, so you just have to cut it, and deal with other problems later.

The other reason for attending the grain event was to find more efficient ways of monitoring grain when in store.  We store a good deal of our crops for many months after harvest, and sell it out gradually until we sell out usually by the following May.  It is very important to put it into store at the right moisture, and to get it to the right temperature as quickly as possible to prevent insect infestation.  The ideal is to get the temperature down to below 10 degrees C as soon as possible after harvest, certainly by December, and in a mild autumn with little frost, this can be tricky.  We have ducts under the grain heaps through which we can blow cool air, however with electricity as costly as it is we have to be on the ball with when we run the fans.  I discovered you can get fancy switches which only turn them on when the difference between the temperature of the grown and ambient exceeds a pre-set amount, (around 6 deg is best).

I also found a good source of temperature sensors, which can be left stuck in the grain for the whole season.  Traditionally we clamber over the heaps every couple of weeks taking the temperature with a long probe, the trouble is that friction heats it up as you push it in, and you have to wait a couple of minutes for it to cool down again for an accurate reading.  This means that taking the temp of the grain can take at least a couple of hours.  I now plan to buy sensors for all heaps, with long leads on, so it is a quick and easy job to plug the meter onto each cable at one point on the heap.

The last month has seen the arrival of a new batch of 24 calves, who are still being milk fed.  They are a lively bunch, and it is a battle to get the milk buckets into the pen without being tripped over and tipping it all on the floor.  They are not fussy about where they stick their noses, and when hungry will suck anything including each others ears and stray bits of baggy clothing.  In the same month we sent off the big steers from the meadows, to Frome market, where the trade was brisk, and they sold better than last year’s group.  Current rules mean that we had to have them tested for TB before they could leave the farm, a sensible precaution you might think; we wouldn’t want to spread the disease around the country.  However this measure seems utterly pointless when no attempt whatever is made to control the disease in wildlife, where it is rampant.

There is no question that there is regular exchange, each way, of TB infection between cattle and badgers in many parts of the country.  Enormous amounts of money are wasted nationally, in culling infected cattle, over 40,000 so far this year, also causing huge amounts of extra work and stress for their owners.  Yet sick badgers are left to spread the disease far and wide, and to suffer slow and painful death themselves.  TB is a disease of overcrowding, and badger numbers have never been as high as they are today.  Surely the fairest thing to do is to help the badger population back to healthy status, by targeted culling of diseased setts?  Why does no one in authority have the guts to do the right thing? 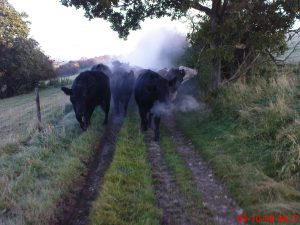 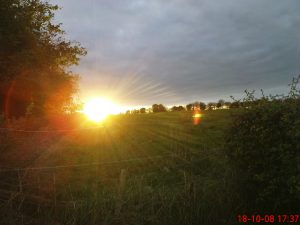 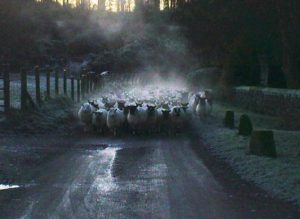