To brighten up our day today, we had a visit from a nice lady from the British Cattle Movement Service, whose job it is to go around farms, checking that every bovine animal has its compulsory tag in each ear, that all passports are present and correct (every bovine has its own passport), and that all movement records are completely up to date and accurate. The need to do all this came about from the BSE crisis ten years ago, which was caused by dubious practices in the feed industry.  All that is well under control now, and one must ask whether such stringent and expensive controls are still necessary.  This lady spent three and a half hours on the farm checking everything, what a waste of time, when we have already spent hours keeping the records up together ourselves, and getting the cattle in to check and replace tags.  The stupid design of tags means that a high proportion get pulled out and lost, at least 10% per year.  There is another series of whole farm inspections which checks cattle tags and records, amongst many other things, and which can impose very heavy fines for breaking the rules, you would think this would be incentive enough for farmers to keep things up together, why there needs to be more than one policing system beats me.  One more thing on cattle, if you fail to register a newborn calk within 27 days of birth, you cannot then get a passport for it, it cannot move off your farm, and it will have to be shot.  There is no appeal system, and no leeway.

The EU in its wisdom has imposed a system on the rest of Europe which compels farmers to put a tag in EACH ear, and individually record ALL sheep.  Our government has miraculously negotiated a UK opt-out which allows us to manage our flocks in a slightly more relaxed fashion, but which still requires plenty of ear-tagging, and a degree of record keeping.  However, if we fail to do this right, we will have double-tagging imposed on us too, bureaucratic, unnecessary, and causes extra stress and pain to the animals.  I don’t believe for one moment that all European sheep are tagged in this way, many countries just lift two fingers to such ridiculous rules, whereas the zealots in Defra make damn sure we do it absolutely by the gold-plated book.

Another EU absurdity relates to electric fencers, the commission has decided it wants to reduce the maximum power allowed to be emitted by these very useful gadgets that we clip to an electric fence to keep wild and woolly animals safely where they are supposed to be.  They want to reduce power output from 8 joules to 5, which, being a 37% reduction I fear will mean more escapes on Saturday afternoons just before a six nations rugby match, or on Sunday mornings during a nice lie-in.  Where is the sense in this?  Someone told me it might be something to do with the fact that French manufacturers have only ever been allowed by French law to produce 5 joule machines, and they want us all to be made the same.  The trouble is our animals sometimes need a good belt to keep them in line, being colder and wetter here than in France, maybe our animals grow thicker coats, which insulate them from electricity as well as the weather?  (The French have always had  a big say in what happens in the EU, that’s why so much of it is so mad). 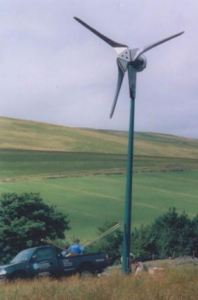 Last month I promised more on wind turbines, so here it is.  Friends of ours who live in the wild hills of Northumberland installed a 6kw wind turbine last August, to generate electricity and save on the fuel that they put in their generator, as they are miles from the mains.  In an average year, they would expect the generator to be running 8 hours per day during winter.  This year it has only run for three hours in total for the whole of January.  Admittedly January was windier than normal, and February has been a lot quieter.  They tell me it is quite deflating to see the blades still, but equally pleasing to see them whizzing round in a wind, harnessing free fuel, producing no greenhouse gases in the process.  Financially they will be quids in after a few years, and they can even earn money with it by claiming ROCs,(renewable obligation certificates), which they can sell for about 3 pence for every kw generated.