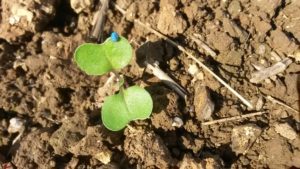 A newly emerged oilseed rape plant with the seed coat stuck to the leaf.  The blue colour shows it has contained a seed dressing to protect the new plant from early season disease.  It is here that the controversial neonicotinoid insecticide used to be applied.

Many traditionally minded farmers believe it is madness to plant autumn crops much before October 1st, you run a higher risk, they will say, of disease and pest attacks in the the newly emerged crop than you do if you sit patiently and wait for the middle of the month.  By then of course the days are shorter, and the weather has inevitably deteriorated, you are then forced to muddle the seed into sticky and unsuitable seedbeds.  Here we are firmly of the school of thinking that says if the conditions are right, go for it.  So last Sunday we really got going, having sown just a couple of fields the previous week in between moderate amounts of rain.
On Sunday it came right, the rain had put the soil into just the right condition, patchy sunshine and a drying wind for a whole week running meant Gary could push ahead with the cultivator, and Dougal could follow on a few hours later and drill into near perfect seedbeds. 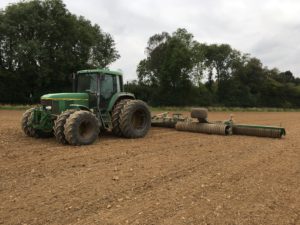 A few more hours and Brendan would pull in with the rollers and finish the job leaving the fields tidy with all stones pushed out of sight.  We always aim for text-book seedbeds, meeting the 3 “F”s, fine, firm and flat, and though not always successful, the conditions have been near perfect this last week.  We now wait patiently for the new shoots to emerge, keeping a vigilant eye open for the slug menace, always particularly dangerous in a field following oilseed rape the previous season.  Slugs thrive in the damp canopy beneath the tall rape plants, and after harvest they wait patiently under stones and clods of soil for us to plant a tasty crop of wheat.  Generally we have to use slug pellets on these fields, as they can easily destroy great patches of single leaf wheat plants faster than they can grow.  The tell tale signs of slug grazing are shredded leaves.

We had a bit of fun with a demonstration tractor on the drill last week, a more powerful model than the trusty old 2001 model John Deere that has done the job since then.  It also had the latest whizzy GPS autosteer system installed, which means that once programmed, it will pull the drill in dead straight lines in exactly the right place right across the field.  The proof of the wisdom of this will be in how the seeds emerge, will there be any embarrassing gaps because we didn’t set it up right?  The theory is great, the job is less tiring for the driver, leaving him able to keep a closer eye on the drill and settings rather than having to concentrate hard on steering from 6.30 am ‘till 8 or 9 at night.  When buying a new tractor you can specify all sorts of fancy extras, cab suspension, premium seat, drink cooler, 50kph speed with airbrakes, front linkage, Bluetooth radio, different types of gearbox, a myriad of wheel and tyre sizes, LED lights and so on, all with a price attached, and of course the demo machine has the best of all these so you can admire them, and realise how much you really need them…… 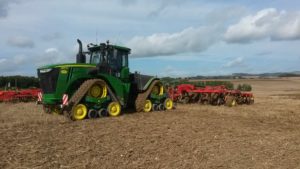 One damp day a couple of weeks ago we went to our John Deere dealer C Smart Ag’s working demonstration day, where the most exciting machine was without doubt the monster I described here a few months ago, the first JD 9RX to arrive in the UK, and here it is working in Dorset.  We queued up for a ride in this beautiful 600 horsepower beast and were duly impressed, huge, and smooth and quite, with leather seats.  The only trouble is there aren’t many machines in Dorset big enough for it to tow and really show its capabilities, it made a 6 metre cultivator look like a garden rake.

At the opposite end of the farming spectrum, a trip to a sheepdog trial near Coombe Bisset near Salisbury was a wonderful contrast.  Shepherd and dog were put through their paces.  The day we visited they were running the ‘double fetch’ class.  The shepherd stands on a straw bale and directs the dog to circle the field to the left, (come by) until he finds a group of 5 sheep that have been released some 300 yards away.  He then has to bring them across the field towards the shepherd, through a gate along the way, and then once arrived, he is told to ‘look back’, he must forget the sheep he has just delivered and look over his shoulder to spot another 5 sheep in the distance, 4 or 500 yards yonder.  He must run off to fetch them and bring them back to join the others, then guide the group of 10 together through more gates and then help the shepherd to pen them up in a small pen. 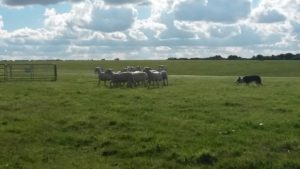 The shepherd directs all this with a series of whistles or calls, and when the dog is bringing the sheep along, they must not wander more than 20 metres either side of an imaginary corridor, or else points will be deducted.  There is a time limit of 13 minutes for the whole exercise.  Many did not complete the course, but those that did were remarkable to watch, such huge levels of skill in the shepherds, and intelligence in the dogs are very impressive.  Competitors came from all over the country, this trial is run every year in the national series of trials on the same farm, and comes highly recommended for interest and entertainment. 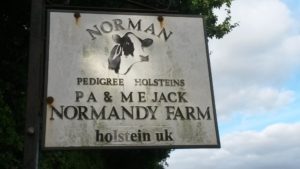 A couple of weeks ago our friend and neighbour Peter Jack and his wife Margaret retired after nearly 40 years as tenants at Normandy farm, and as is the usual way, all the kit on the farm was put up for sale in the last week of September.  Farms traditionally change hands on 29th September, which marks the obvious break point in the farming year, between harvest and the new crops being sown.  The sale was a great gathering of all the usual suspects, very much a social occasion as well as an opportunity to pick over all the bits and pieces with which Peter has farmed so impressively over the years.  The sale seemed to go well, and although hopefully successful financially, was of course tinged with sadness as it marks the end of a very much admired farm business in the locality.  The new tenant is an organic farmer of some repute from the west of the county, and we will watch over the hedge with great interest, hoping that not too many weed seeds blow across.  The old adage comes to mind: ‘How do you make a million from farming?’  Answer: ‘Start with 2 million’.  Or if organic farming perhaps you should start with 4! 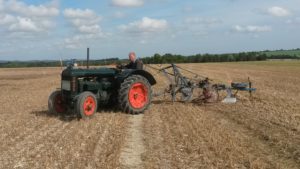 Blandford Young Farmers held their annual ploughing match at Tarrant Hinton the other weekend, and Dad and I were honoured to be asked to judge the 2 and 3 furrow class.  The ploughmen assemble early on Saturday morning with their assorted ploughing rigs, some are classic vintage, some less classic but still pretty vintage, and many others with a range of interesting machines.  The field has been painstakingly measured and marked out by the chief steward and his team, and lots are drawn for who gets to plough in which plot, each will be hoping for some good deep soil with a bit of body, unfortunately this light chalky soil could prove challenging all across the field. 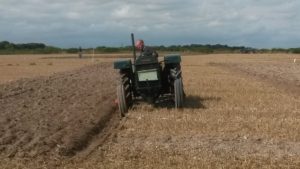 The ploughmen have to have performed their ‘opening split’ by 10.00, which the judges must then examine and mark.  Much can be learned about the range of abilities in the field even at this early stage, although it can be fascinating to see who manages to rescue a poor start by getting the rest right as the morning progresses.  Some can be blamed on hard patches of ground, on the tramlines, or on loose straw, but not all.  The judges then wander the field admiring the ploughmen and their machines at work, and after a while are whisked off for a very enjoyable lunch, hosted by the generous farmer providing the field.  Eventually the chief steward calls us to order and we return to the field to assess the completed work.  A further 9 categories of ploughing features must be assessed and marked, and the results tallied up, while the ploughmen wait patiently to see how their efforts have fared.  At the end an impressive range of trophies are awarded to the deserving winners, and we hope that everyone goes home happy. 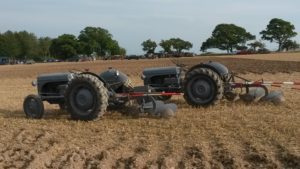 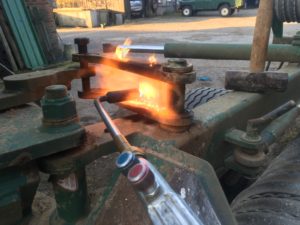 An accidental bend in the roller folding mechanism required a bit a heat and bashing.  The Saturn 5 oxy-propane kit still has its uses.