There is sad news to report, our lovely song Thrush, who spent so long building her nest and laying her first egg, never came back.  (See last month).  Let us hope she decided to start again further from human prying eyes, rather than befalling a less attractive fate. 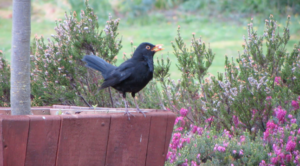 In her place this month I include a very noisy blackbird, who makes his presence heard every time the cat is about.  He swears endlessly, even with his mouth full, whenever she appears in the window or slopes lazily across the garden, he shows no fear, and if one could translate his language I am sure the editor would not print the transcript.  A short snippet of the video from which this picture is taken will appear on the website shortly.

On the farm, this week began with frosty nights and woolly sheep, it has ended with hot sunny days and wool-free sheep, some of whom have already decided it is time to drop their lambs.  Our shearing contractors arrived prompt first thing on Tuesday, after the bank holiday.  The sheep had been penned up indoors the night before, warm sheep always shear better than cold ones, the grease in the fleece lifts off and cuts more easily.  By lunch time all were undressed, looking white and clean, and they were then walked off to their lambing paddocks in small groups.  Here they will stay until all have lambed, less disturbance means happier sheep and less mis-mothering.  As always at this time of year, please could walkers take extra care to keep dogs under control when near sheep, it doesn’t take much to spook the ewes, and then new-born lambs get lost and chaos ensues until families are matched up again. 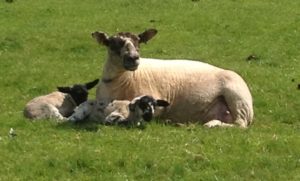 By Thursday the first lamb of the season had appeared in Roundbush field, and now there are several dotted about in different corners of the farm.  The weather has turned out perfect for the sheep this week, and the cows who have calved are also enjoying the warmer weather, although this can’t be said for the unlucky fifteen who are still indoors, blaming the indolence of the male of the species for their prolonged incarceration.  Once they have calved we soon whisk them off to a nice grassy field, outdoors is healthier for calves and the milk supply.  Mastitis is a risk if we keep them indoors for too long once the milk starts flowing.

The frosts throughout March and April have wreaked havoc on our emerging poppy crop.  Last week we decided we would have to re-sow two fields, after lengthy periods spent crawling around on hands and knees counting plants.  A viable crop is really only possible with at least 40 plants per square metre, quite a lot of our poppy acreage is perilously close to this limit, but we are going to hope for the best.  However the two fields in question did not pass the test, and on Wednesday afternoon we sent the sprayer in with a dose of glyphosate, to take out what poppies were there, as well as the copious quantities of weeds that had already established themselves.  Thus on Thursday we were able to start again with a clean seedbed, and 6 new bags of seed.  Some gentle rain now to get the newseeds off to a good quick start would be very helpful, the biggest danger from such late sowing is being caught out by very dry soil.  We cultivated, drilled and rolled the seedbed as quickly as possible, so as to lose as little soil moisture as possible.

Here is a picture of what the plants looked like on May 4th this year, the purple is a reaction to the cold and frost. 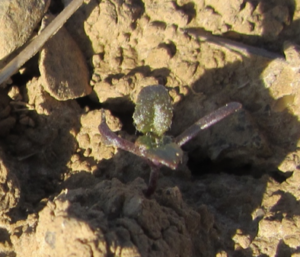 The next shows what the crop looked like on 12th April 2015, 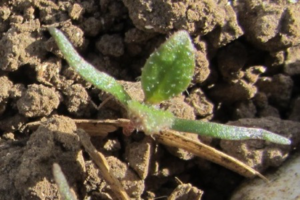 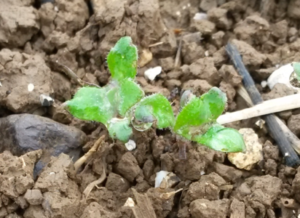 In each of the three seasons, we have sown at exactly the same date, 20-22nd March.  These pictures show very clearly how late we are running this year.  The poppies have suffered from too much rain soon after sowing, which capped some of the soil, followed by a cold and dry April, with plenty of frost, which has held back growth.  Germination rates have been poor, last year we had up to 120 plants per square metre, this year we are struggling to find half that in most fields.

Fingers are crossed for some more favourable weather to get the re-sow going. 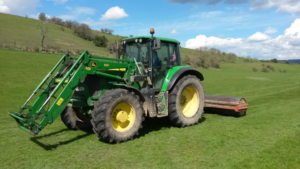 One of the important early spring jobs is to chainharrow and roll the grassland.  This is to level off any molehills, and divots caused by heavy feet in wet conditions.  This is all the more vital in fields where we are likely to cut grass to make silage, soil in silage can spoil the fermentation, and cause disease in the animals.  One of the pleasures of grass rolling is the creation of stripes, and gives the tractor driver extra incentive to drive carefully.  The drivers of cars waiting at the traffic lights by Durweston bridge get a fine opportunity to see whether the work is up to standard.

A further casualty of the winter weather patterns is our Maris Otter barley.  The unusually mild early part of the winter extended the risk period for Barley yellow dwarf virus (BYDV) transmission to well past Christmas.  This is a problem we can usually say goodbye to each year by late November, as the first frosts can usually be expected to arrive by then.  The virus is transmitted by the bird cherry aphid, which during warm weather exists in winged form, and is carried into crops on the wind, often from nearby trees, where they spend part of their life cycle.  These aphids often, but not always, carry the virus, acquired when feeding on already infected crops.  As the season cools down they may breed wingless generations, which can still carry and spread the virus, but much more slowly and not as far afield as the winged form.  BYDV affects all cereal crops to some degree, but barley suffers the most, especially older varieties such as Maris Otter (famous for its beer brewing abilities, see previous broadcasts).  Barley is said to be able to suffer up to 80% yield loss from infected plants.  That is easy to imagine looking at our crops, where patches of nearly dead barley are surrounded by healthier growth.  We have never before been caught out so badly, we must be facing the loss of at least a quarter of the yield, and what survives will not ripen evenly, leading to poorer quality in the grain that we will eventually harvest.  Wheat infected by BYDV is said to be able to lose 20% of its yield, we have seen some patches in a few of our wheat fields as well.

Control of a pest like this can be approached in a number of ways, you can employ the kitchen sink approach, using an expensive insecticidal seed dressing, followed by a couple of sprays as autumn progresses, or one can leave out the dressing, and go for one well timed spray, and hope for the best.  We are generally a bit fed up with spraying by November, and are itching to put the machine away for the winter.  It is also a relief to stop having to be constantly looking at the weather, ‘is it calm enough, is it dry enough?’  So once we got past November we stopped worrying.  That’s where our trouble probably started.  The kitchen sink enthusiasts have good reason to feel a little smug this year, as their crops look lovely.  The mild weather continued into February, and aphid movement probably continued until then.  BYDV takes a long time to show its presence, so by the time we spotted the tell tale patches in early March, it was way too late to do anything about it.  We will have to suffer the ignominy of crops that look like they must be organic right through till harvest.  Keener farmers than me might have pulled the plug and sown another crop, as we did with the poppies, but we had already invested a good deal into the Otter, and one always tries to be an optimist……  I cannot bear to take pictures of the mess, so this remains as a text only story. 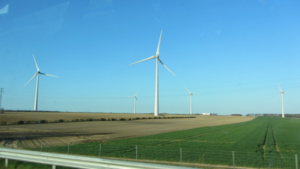 On a lighter note, although a subject I feel sure will raise a few hackles, seeing as Dorset remains a largely wind turbine-free zone.  A recent trip to France to explore the Orne Valley by canoe took us past many of these stately creations, harnessing clean energy whenever the wind blows.  One obvious advantage of the wind turbine is that one can still grow crops on the ground around them, unlike solar panel parks.  I heard recently that an anaerobic digester utilizing crops grown on 800 hectares of land produces the same amount of electricity as that produced by a 10 hectare solar park.  I found this a little startling, AD plants also generate a lot of road traffic.  Wind turbines however produce energy from wind, and still allow you to grow crops.  Oh yes, and they spoil the view! 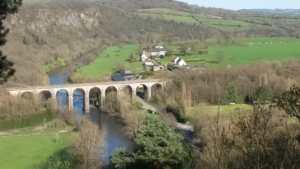 The Orne Valley, near Crecy in Normandy. 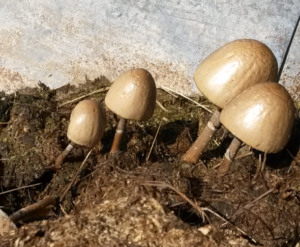 Found on a heap of horse muck.