After last month’s rather tedious ‘Grain handling special’, I will endeavour to be concise, interesting, and to the point, although surprisingly I have heard no complaints……… 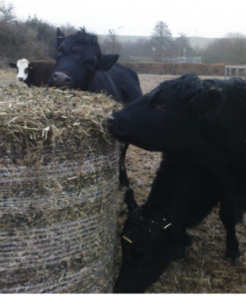 The winter routines are well established, animals are having to be given extra food as the grass has all been well chewed down, the two year old heifers seem surprisingly happy on bean haulm, my picture shows that they were so keen for it today, they wouldn’t wait for the bales to be unwrapped.  The ewes are spread out thinly on various small grass fields, being fed a bit of hay, and the rams are out with them doing their business, well it is Christmas!

The dry cold weather of the last few weeks has been very welcome, the ground has been dry underfoot when frozen, great for man and beast, and it has been good for blowing the grain heaps to cool them down.  Just in case we forget what the weather was like at the beginning of December, the other picture shows how happy the ducks were, swimming around in front of the stables in our yard.  Since it dried out we have overhauled the drainage system, so this should not happen again too quickly. 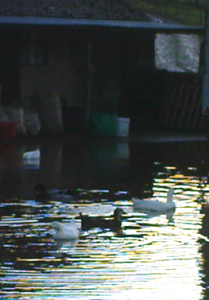 I was very disappointed to read in the Daily Telegraph this week the same old rubbish we see all too often about Britain’s so-called disappearing wildlife.  It is complete cobblers, they print an alarmist story egged on by the likes of the RSPB, in order to sell more newspapers, quoting out of date figures from the 1970’s, and completely ignoring the positive effects on the environment that have come about from the plethora of schemes farmers have joined over the last 15-20 years.  It just goes to show, you shouldn’t believe what you read in the papers, even this one.  For the real picture, go and look for yourself, don’t trust a journalist or a pressure group trying to drum up more members for itself.